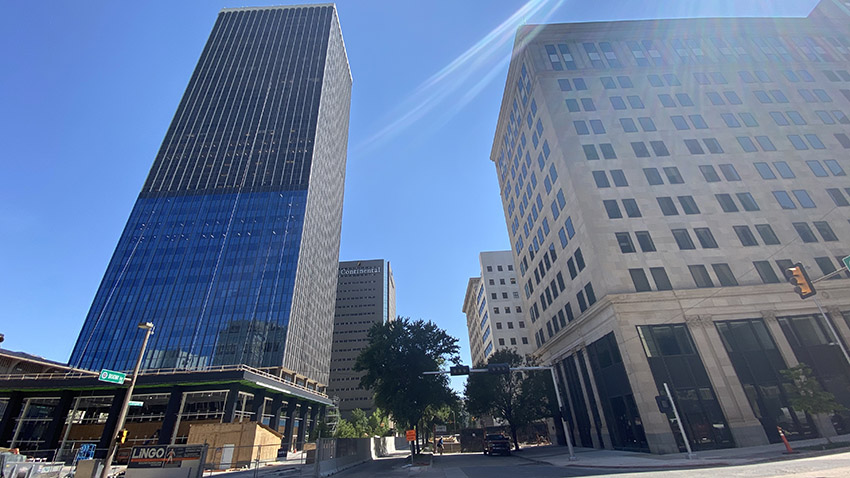 Construction on the future home of BancFirst is looking a little blue these days, but that’s a sign of progress.

The tower’s curtain wall is being replaced all the way to the fourteenth floor. BancFirst will occupy floors 2-14. Once the bank and its operations move in, then the glass replacement will continue for the rest of the building.

“We plan to start moving people in January 2021 at this point,” said David Harlow, BancFirst Corporation CEO. “We’ve been able to continue construction through the coronavirus pandemic.”

The glass has even been able to be replaced as people are working in the space.

The building is being done in phases, with Phase 1 consisting of the concourse, 80% of the plaza and the first floor. By December 2021, the rest of the building will be complete. When the north side of the plaza gets finished, then the south entrance will be closed so the renovation can continue there. 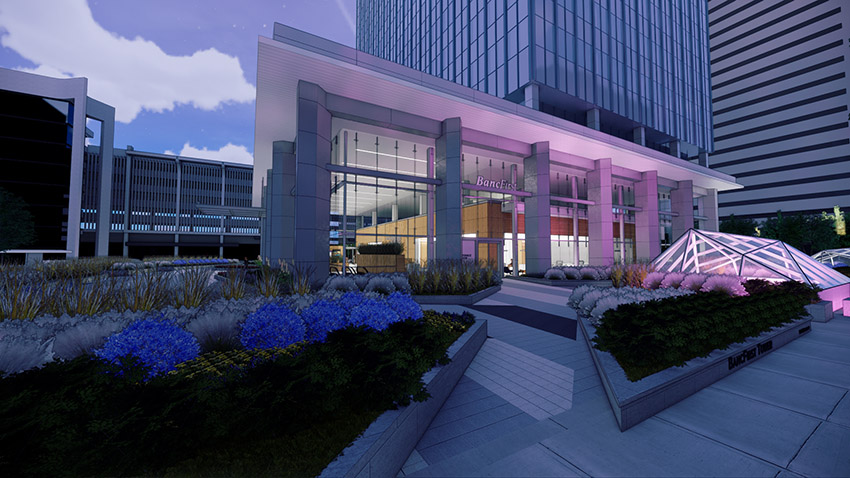 BancFirst is working with its longtime architect, Bockus Payne & Associates, on the renovation plans for the tower’s exterior, the concourse in the tunnel, the lobby and the exterior plaza. The BP&A team includes Collin Fleck, Bruce Bockus, Bruce DeFriese, Taylor Starr and Mathew Siebert.

ADG designed BancFirst’s office floors, with the building’s other floors already having tenant renovations throughout the years. Lingo Construction Services, Inc. is overseeing bringing all those designs to life.

Besides the new glass, another notable difference already made to the building is the removal of some exterior columns. Bockus Payne Architect Collin Fleck said one of the main goals was to create a better view from the exterior into the lobby.

“Visibility was almost nonexistent between the interior and the exterior,” said Fleck.

The team learned what could be possible to help with visibility on a trip to the concourse in the tunnel. Fleck said when the team went to the concourse, they noticed there were not as many columns downstairs as they were around the building. That meant only the columns seen in the concourse were load-bearing, so the others could be removed. 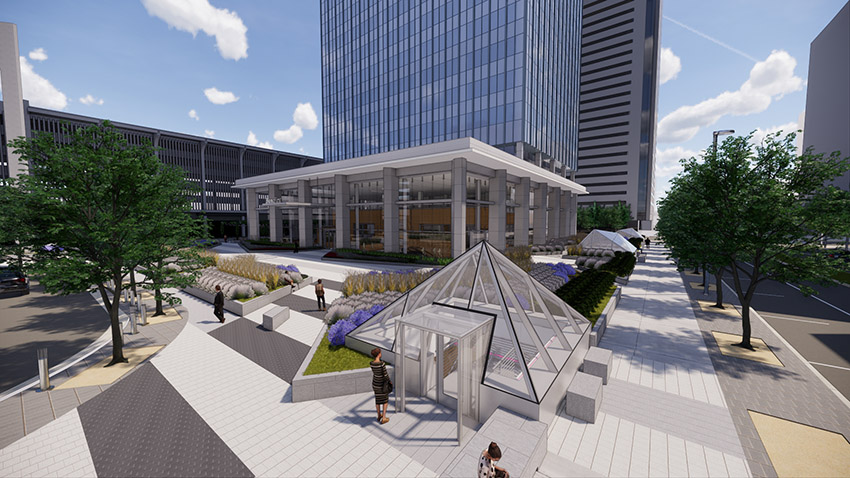 With the columns gone and better glass, more natural light will stream into the renovated lobby. The natural light will be seen in the concourse as well, streaming through peaked-glass light boxes called lanterns. The walking path is being moved to go under the lanterns, which are being placed over existing openings.

Also at the top of the tower, the arches have been removed. Fleck said with the bottom arches being removed along with the columns, the arches at the top had to be removed as well so the building wouldn’t look as heavy. A new glass curtain wall will extend all the way to the top of the building, replacing metal panels that were previously in place.

At the tower’s base, the top three floors’ exteriors will have a metal finish, with tenant signage seen in the same metal.

“Essentially, we will have touched every exterior aspect of the tower,” Fleck said. 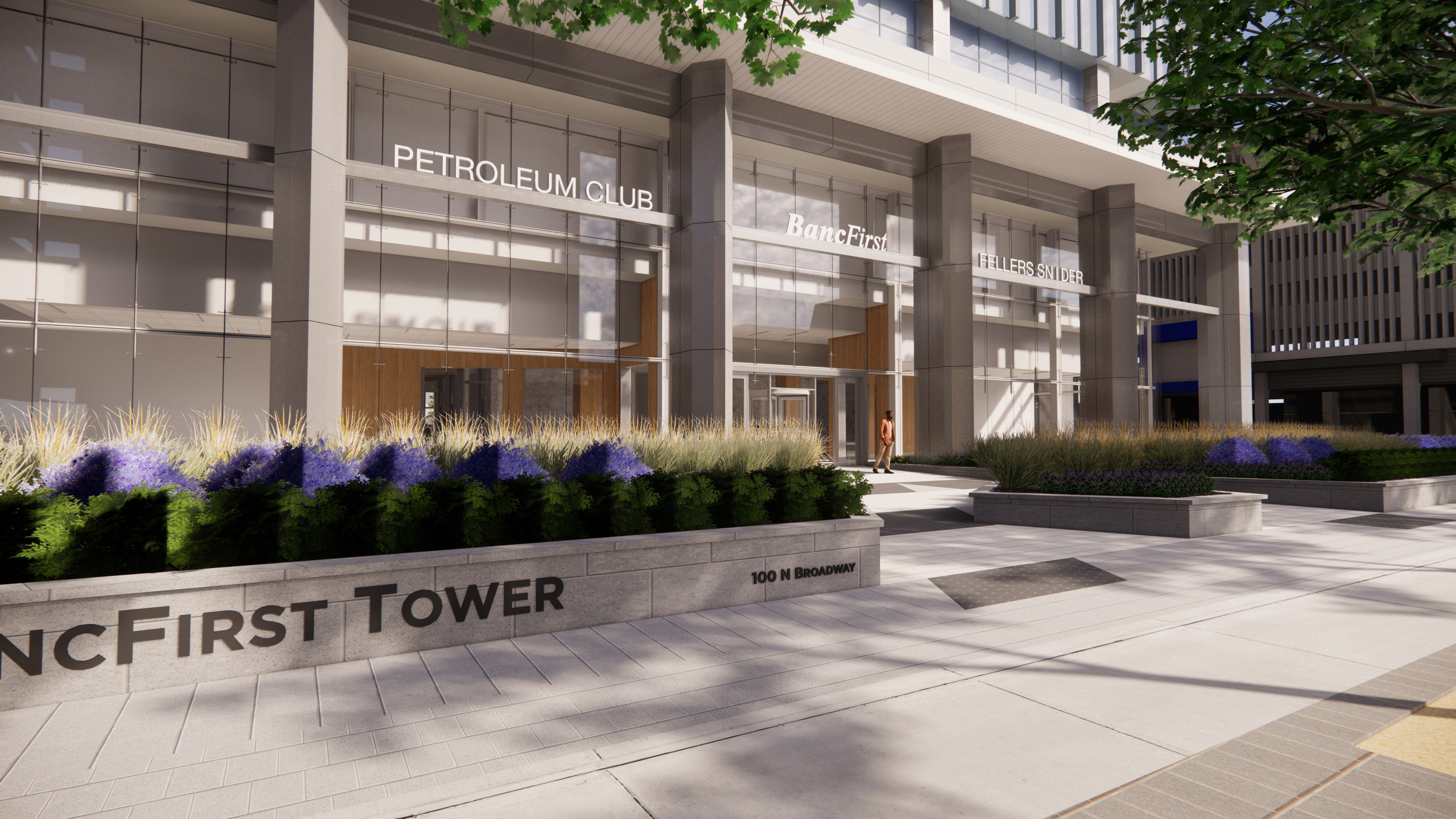 ADG, Interior Designer Angie Dickerson and her team are helping to create a space that BancFirst has never had before – space for every BancFirst employee.

ADG’s work first started by talking to many of the more than 400 people that are expected to move into the floors. Dickerson and her team asked the staff about who they work with frequently and who they need to be near.

“We had to figure out how to appropriately place departments adjacent to each other,” she said. “We wanted to make sure we were stacking them appropriately, while also keeping in mind the potential for growth. It was a big effort to try and sort through all the schematic phasing and planning. You don’t realize how many people it takes to make a bank work.”

The floors required a lot of demolition, with some spaces dating back to 1971 and other areas having layers of renovation.

Construction is underway now on the office spaces, starting at the 14th floor and working down. Each floor will have a fresh palette, making it an appealing place for employees.

“I really do think that freshness and natural light, with the open space, were a huge requirement throughout the project,” she said.

The space will be accented with pops of color, seen in the images being used from BancFirst’s painting-inspired commercials. The same art will be visible in the lobby, helping to connect the two areas.

“With Red Earth locating on the south side of the lobby, it will be great to have interesting art throughout the tower,” she said. 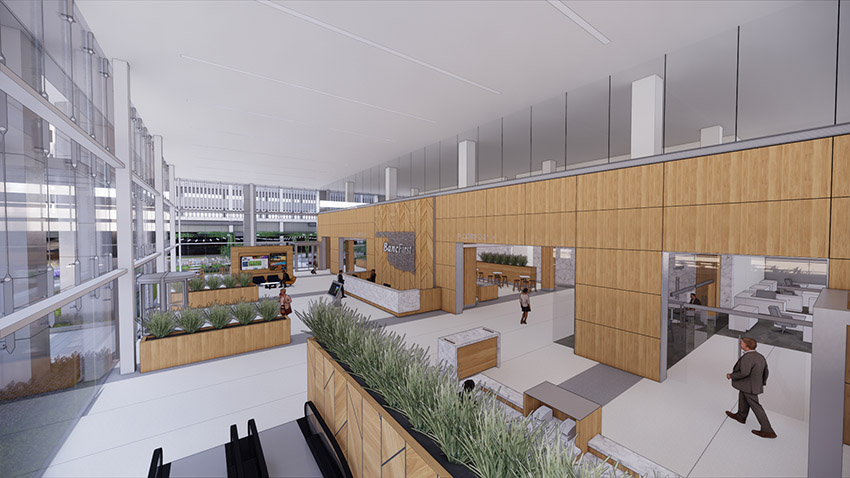 The project includes full modernization of all 14 elevators as well, with the first three elevators being completed soon. Harlow said he didn’t know there was so much to learn about elevators. The team hired an elevator consultant to direct them on what would best serve their needs.

Harlow said BancFirst will occupy about 90% of its space when the company moves its employees from two locations; the corporate headquarters at Main Street and Broadway Avenue downtown and the Technology and Operations Center near the Will Rogers World Airport. He said he doesn’t expect the company to be fully out of the Main and Broadway building until July 2021.

He commended the entire building team for being so diligent on the project. Price Edwards & Co. is handling the management and leasing for the building.

He said he’s looking forward to having all the corporate employees in one space. For him, it will be like a homecoming, since he started in the building when it was Liberty Bank Tower in 1986.

“I think it will be good to have us all under one roof,” he said. “I do believe there’s value in all of us being together. This gives us a long term home with room for expansion.”