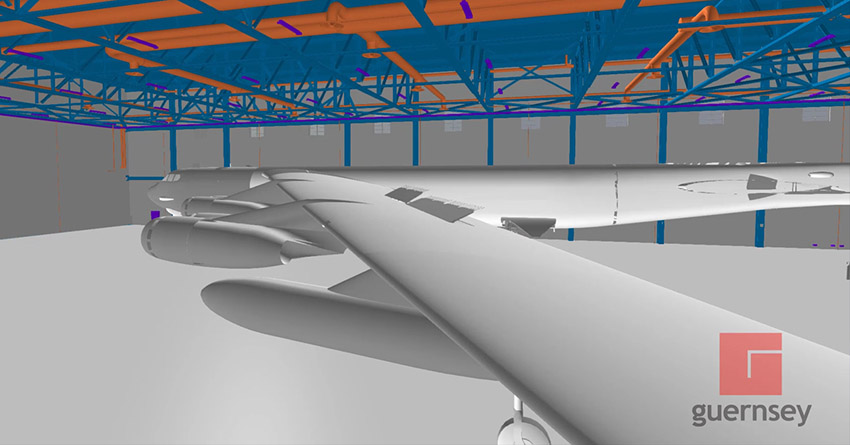 Designed by Oklahoma City-based Guernsey and being constructed by Alberici, the $20 million, 60,770 square-foot addition will include a wing and fuselage from a retired U.S. Air Force B-52 bomber, allowing the company’s engineers to utilize it for hands-on form, fit and function testing.

This project and others at Boeing OKC will create openings for more than 300 engineers in 2020. This year, Boeing OKC has hired 190 engineers to date.

"The high-bay addition will enable our talented engineers to do prototyping with a B-52, as well as real-time collaboration with our U.S. Air Force customer," said Nancy Anderson, Boeing OKC's vice president of aircraft modernization and modification. “It's the best of both worlds. We have models and we can now get access to an airplane.”

Read more about the aerospace industry in Oklahoma City

Boeing’s B-52 modernization and sustainment efforts include the Commercial Engine Replacement Program (CERP) and Radar Modernization Program (RMP). CERP is focused on replacing the B-52’s eight engines with engines that provide economic, operational and environmental benefits. The RMP upgrades the radar on the aircraft to enhance navigation reliability to support nuclear and conventional missions. Both efforts ensure the aircraft remains relevant and mission ready through 2050 and beyond.

“Our economic development team can be doing all the right things, but this kind of announcement shows we’re excelling in meeting the needs for Boeing and the entire aerospace industry,” said Williams. “Boeing doesn’t take these decisions lightly, so this announcement will have people paying even more attention to Oklahoma City and we look forward to helping grow the job opportunities within the aerospace industry.”

According to Anderson, this new space shows Boeing’s commitment to Oklahoma City, which is a key asset in attracting engineering talent and continuing to grow in Oklahoma.

“Today, to attract top talent it’s important to be able to demonstrate a commitment to the digital engineering world,” said Anderson. “The basic foundations of engineering remain the same, but they are now mirrored with model-based engineering and the ability to create digital twins. This new high bay, and our existing AVID Center, give us some recruiting advantages and position us well to compete for and win future contracts.”

Opened in 2018, the Advanced Visualizations and Immersive Development (AVID) Center is an innovative, technological space for community and customers that includes 3D scanning and printing capabilities and a flight simulator. Boeing OKC engineers use the center’s innovative technologies to develop real-time engineering solutions in support of customers. The center is also used to encourage STEM through community outreach.

The new addition for the B-52 work is being constructed on land owned by the Oklahoma Industries Authority, which is leased by Boeing. The Alliance for Economic Development of Oklahoma City oversees the OIA. The project is expected to be completed in 2021’s second quarter.