Bradford House hotel opening in May 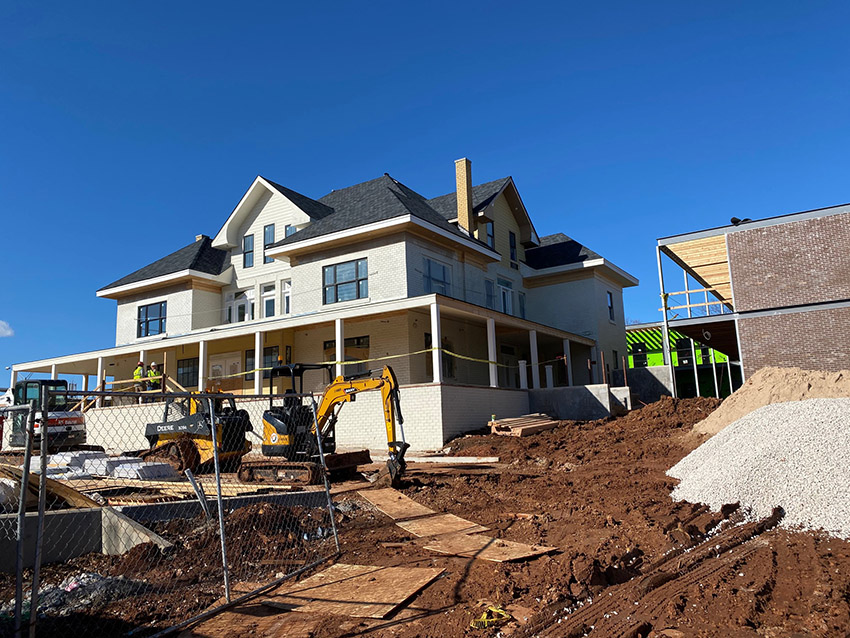 Nostalgia Shoppe will welcome neighbors and visitors to its hotel, Bradford House, starting in May.

Husband-and-wife Jason and Sara Kate Little operate the hospitality management company. This is their first hotel, though the couple also remodeled The Flamingo apartments on NW 23rd, which has since been sold.

Jason Little said getting into the hotel business will allow the couple to pursue one of their favorite pastimes, which is meeting people with a story.

“The independent traveler that will seek out this type of independent boutique hotel will have seen and done a lot,” he said. “And we look forward to hearing their tales and being a memorable part of their story as well.”

Getting into the hotel business seemed like a natural fit for the couple. Jason has a background in commercial real estate investment and Sara Kate works in interior design. Sara Kate’s resume includes the interior redesign at Iguana Mexican Grill, and the interior spaces at Salt & Water, Yale Theatre, The Kitchen at Commonplace Books, New State Burgers and several residential projects.

While they had success with their first apartment renovation, they wanted to get more into hospitality and be able to offer the kind of service and warmth they had seen at more than 30 house-based hotels around the world.

But first, they had to find a house.

Before they were married, the couple started looking for a place that could be turned into a hotel. With the city’s zoning regulations in mind, as well as an initial cost to purchase the property, the house would have be in just the right spot. The house would need to be able to get rezoned for commercial use, yet still have an easy connection to other attractions around the city.

The mustard-colored house at NW 38th and Classen was the one. Built in 1912, it had four apartment units inside and minimal modern updates. With Classen on its direct west, it was near a commercial corridor, yet it had the historic character they were seeking.

The Littles recruited Gardner Studio to help turn the home into a hotel. Gardner’s Zack Woods walked the property in 2015. He said at that time, the team didn’t know how the property would evolve.

Jason Little said he reached out to Gardner to design Bradford House after he saw Woods’ and Jeremy Gardner’s work on 7 at Crown Heights, a condo development in an old building, with new building added to the property. Little lived in one of the condos, so he reconnected with them about tackling a similar venture

“There was sort of always this idea that we’ve have this historic building with an honored past and connection to the neighborhood, then we’d have this more modern streamlined building,” Little said.

The two-story addition will hold 24 rooms, with 12 rooms in the original house. Lingo Construction Services, Inc. is overseeing the entire project.

“We wanted it to have a timeless look,” said Zack Woods. 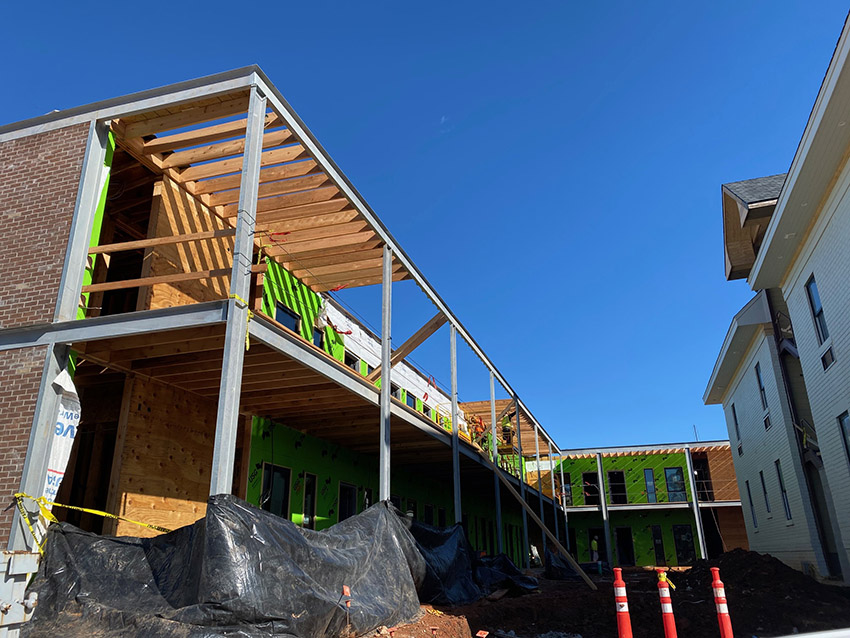 The now-muddy space will become a landscaped courtyard when finished, will offering an outdoor gathering space for guests.

Vintage light fixtures and custom-made furniture will help the rooms feel welcoming. There will be a colored stripe on the front of each door, tying it back into the home’s bright interior colors. The addition’s exterior will be painted black, with the exposed metal painted white, and accented with exposed cedar.

Besides the regular double queen or king-bed offering, the addition will include six rooms with bunk beds, four of which can conjoin with a king room to provide two-bedroom family rooms. Little said he thinks the rooms will be popular with families as well as friends traveling together, but want to have something a little lower priced.

The house sits on less than an acre, so the space between the addition and original home is limited; yet, it feels right, Little said.

Gardner and Brent Wall of LAUD Studio have designed a heavily landscaped urban courtyard connecting the two buildings. When the Bradford House opens, the space will be curated with old movies playing on an outdoor screen and other activities.

In the original home, guests will find 12 rooms, a bar and café area, with Quincy’ Bake Shop in the basement. Neighbors and other guests will be welcome seven days a week to come enjoy coffee, a meal, a pastry, or a cocktail and become regular customers. 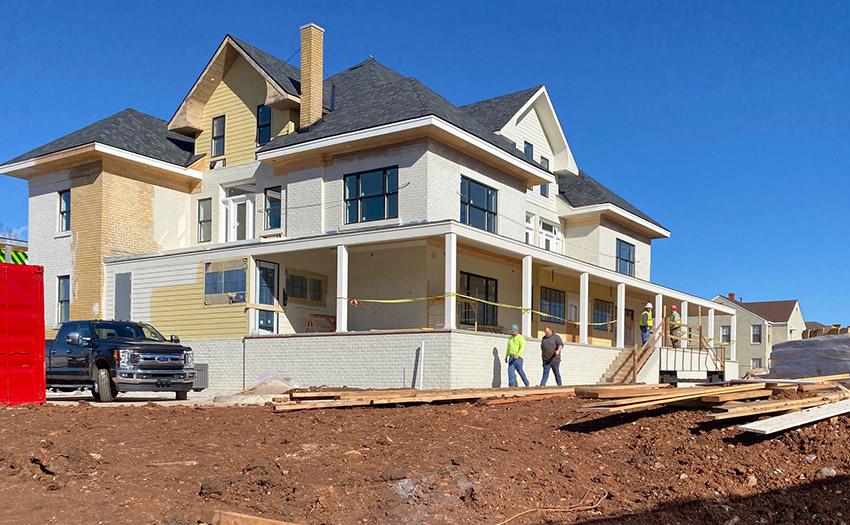 The newly-built front porch will offer plenty of space for sitting and visiting as well. The original house's front porch wasn't structurally sound, so it had to be rebuilt.

Little said the couple’s team has an array of experts that will help run the restaurant and provide top-quality service throughout the Bradford House. He said the couple knows its weaknesses, so they brought in experts with dozens of years of experience in the industry, working on everything from opening hotels to creating top-quality food in the kitchen. There’s even two certified master sommeliers onboard.

“We were not just going to try and jump in on this on our own,” Little said. “We are cognizant of the help we need and don’t have egos that would get in the way of asking for help.”

On the first floor, the former apartments or living rooms have been turned into spacious sitting areas for enjoying cocktails or coffee. Much of the crown molding was rebuilt to look like the original design. The fireplace mantle has been restored and painted to fit in with the rest of the Scarab Blue color, created by Papers and Plant of London.

The light teal interior is only the beginning of colors throughout the original house, curated by Sara Kate Little. Each room’s bathroom has a different antique wallpaper, produced in the 1970’s from English turn of the century patterns. There are two cast iron soaking tubs in the hotel, one is pink and to other is dark green. Each room has a different vintage mid-century Italian light fixture, which the couple purchased on one of their buying trips in Europe.

And there’s more to come, with Penguin Orange Collection books ready to line the bookshelf in one of the sitting rooms. Gardner is designing and making all the furniture and the handrails for the stairs.

All the special touches, from design to ingredients in the cocktails, are the kind of offering that the Littles knew they could only do at a house-turned-hotel type property. They wanted to offer the level of services someone would find in another person’s home.

And for the Littles, it will nearly be second home for them.

“We see this as being a part of our lives. It’s not just an investment where we’re involved from the beginning. We imaging our little girls and our little boy growing up and helping out here.”