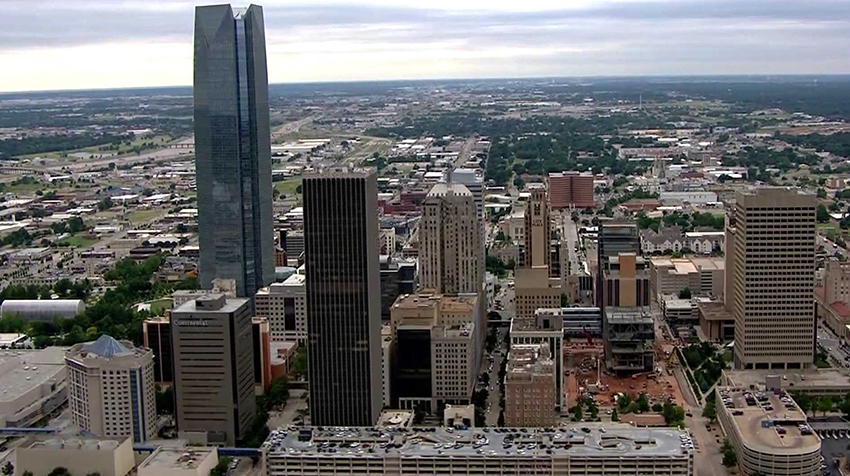 The leaders of three major construction projects and a long-time downtown advocate were the featured speakers for the Greater Oklahoma City Chamber’s July Chamber Forum.

Mark Beffort, CEO of Newmark Grubb Levy Strange Beffort, spoke regarding the re-purposing of the former SandRidge Energy Tower. Gary Brooks, president and CEO of Cornerstone Development, detailed restoration updates on the First National Center. David Harlow, CEO of BancFirst, spoke about the remodeling efforts at the new BancFirst tower. Jane Jenkins, president and CEO of Downtown Oklahoma City Partnership, detailed what impact the development may have on the city’s future.

“Downtown growth happens slowly and incrementally,” Jenkins said. “Thanks to corporate investment, community commitment and civic leadership these projects and others planned have brought fresh energy to downtown.”

“These are structures important to the people of Oklahoma City,” Jenkins said. “Many people remember when the Liberty Tower and Kerr McGee towers finished. Oklahoma City has embraced these projects that will give our downtown added character.”

The restoration of the 90-year-old First National Center began in the fall of 2019 after spending over two years of demolition work on the building’s core.

“We hauled off about 44 million pounds of debris before we ever turned a screw or hammered a nail,” Brooks said. “Trying to bring a building to code built 90 years ago is a challenge.”

The restoration of the Great Hall, the original first-floor centerpiece, will soon begin, and artists from Oklahoma City, Chicago and New York City will provide elements to make the lobby area come alive.

The former home for SandRidge Energy will soon be home to several state-run agencies who housed in privately owned locations or state-owned offices.

“This move will allow all the agencies to approve their efficiencies and lower their operating costs,” Beffort said. “It will benefit all of us who live in the state of Oklahoma.”

When construction completes on the BancFirst Tower, the company will have nearly doubled its occupancy capacity from 100,000 square feet to just over 190,000 square feet.

“We were out of space,” Harlow said. “We are really excited about what’s going on. I think it will be a magnificent home for us for long-term growth.”

The first 14 floors will house BancFirst with the remaining 21 floors to be a multi-tenant office space. The outside of the building is being re-skinned with completion set for the end of 2021. BancFirst employees will begin occupying the building in January.