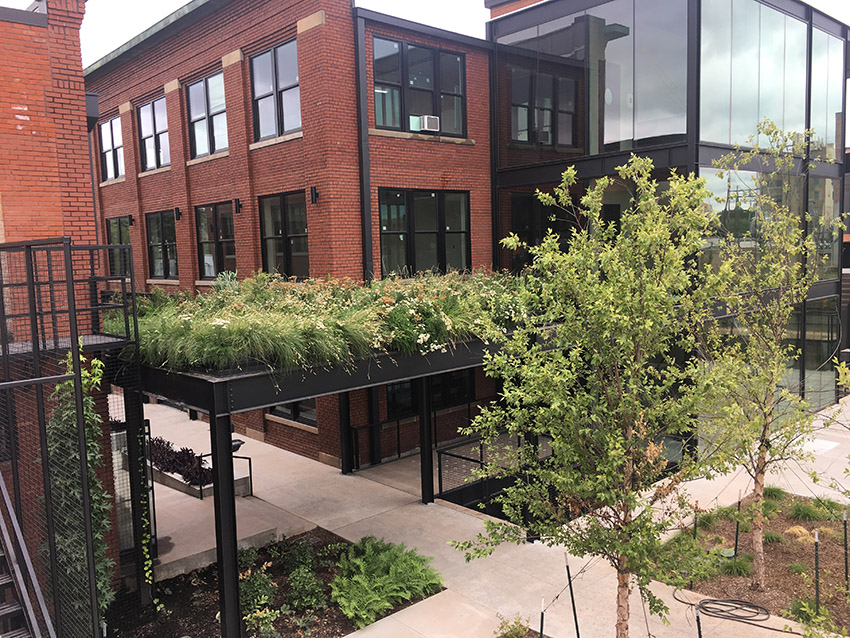 The overhang between Central Exchange's two buildings is covered with natural grasses, which not only helps accentuate the main entrance, but provides greenery to the office tenants on the west building's second floor.

Two large brick buildings on Northeast Sixth Street just east of Broadway are ready to open as Central Exchange, a multi-use Automobile Alley property that will soon have everyone talking.

The western building’s office tenants will occupy the space in August, with Parlor expected to open before fall arrives.

The buildings are owned by the investment group Capital Tribune, which is moving its offices into the western building’s lower floor. The developers used the state and federal historic tax credits to help with the costs.

AHMM Associate Director Wade Scaramucci said while going through the process to qualify and received the tax credits is challenging, it’s worth the effort because the buildings are preserved.

“We’ve been given the opportunity to regenerate several buildings in Oklahoma City, which kept them from being knocked down,” he said. “These buildings are expensive to redo, but it’s exciting to take on these projects and make them work. Anytime we can be a part of a project that saves these old buildings, we want to do that.”

The buildings were constructed in the early 1900s. The Pioneer Telephone company used them as a garage and a warehouse. The eastern building was where operators would switch the lines for people to complete their phone calls.

AHMM worked with Chamber-member Studio Flight to create the branding and other marketing materials for the building. The circle is a prominent shape inside the western building. The circle was chosen to emulate a switch plug’s shape. The circle is seen in the lighting fixtures, cutouts in the floor to bring in natural light, port windows at each stairway door, and around the directional signage. The neon-yellow lightning bolt image, hanging in the western building’s staircase, was found in an AT&T safety manual that was left behind in the building.

One of the challenges with the project, Scaramucci said, was figuring out where people could park. While the grand entranceway is designed to promote the area’s walkability, there are still office tenants and Parlor guests that could be driving their car to the property.

The grand entrance faces Seventh Street so people are encouraged to park behind the buildings. The retro-style shade overhangs are being preserved for the 80 new parking spots.

The parking spots also helped Capital’s Reese Travis in his pitch to get office tenants. He said he can offer backdoor parking and other amenities, such as small, outside patio spaces and plenty of greenery. The Central Exchange offices also offer a view of the non-whistle-blowing train and a view of downtown and Automobile Alley.

“I think for me the exciting thing with this project was we took two buildings that were fine and we made an interesting space between them,” Scaramucci said. “It is downtown, but that doesn’t meant downtown has to be hard and pretty. It can have life and natural features to it.” 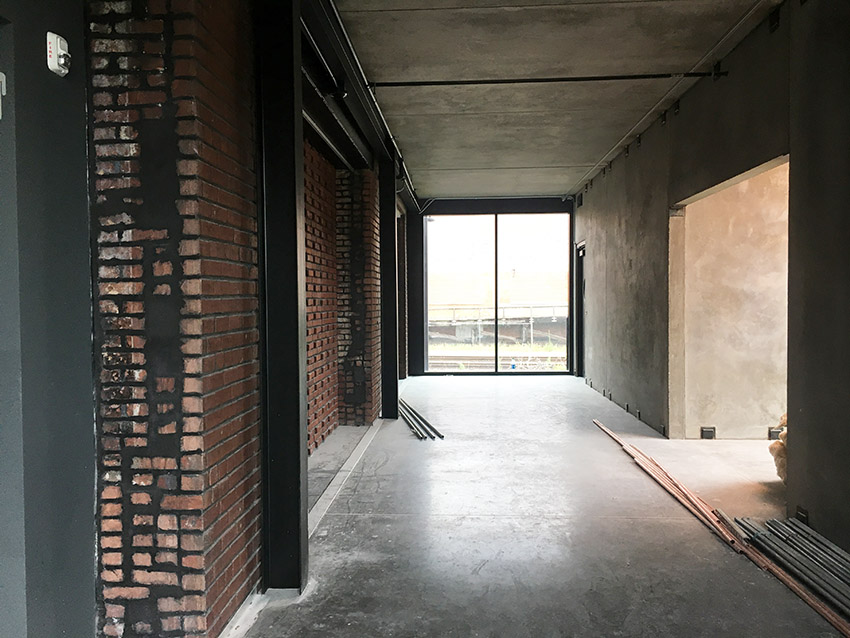 The brick wall is the west building's original northern wall. The elevators and two staircases were added.

AHMM helped give Travis and his team larger floorplates to lease by adding the elevators and the stairs onto the building. There are outdoor and indoor glass-covered stairways. Both stairways are visible, helping to promote walkability inside the building. AHMM used old brick from demolition to add a texture on what would have been the building’s exterior, north-facing wall.

“Everyone that’s looked at the building has loved it,” Travis said. 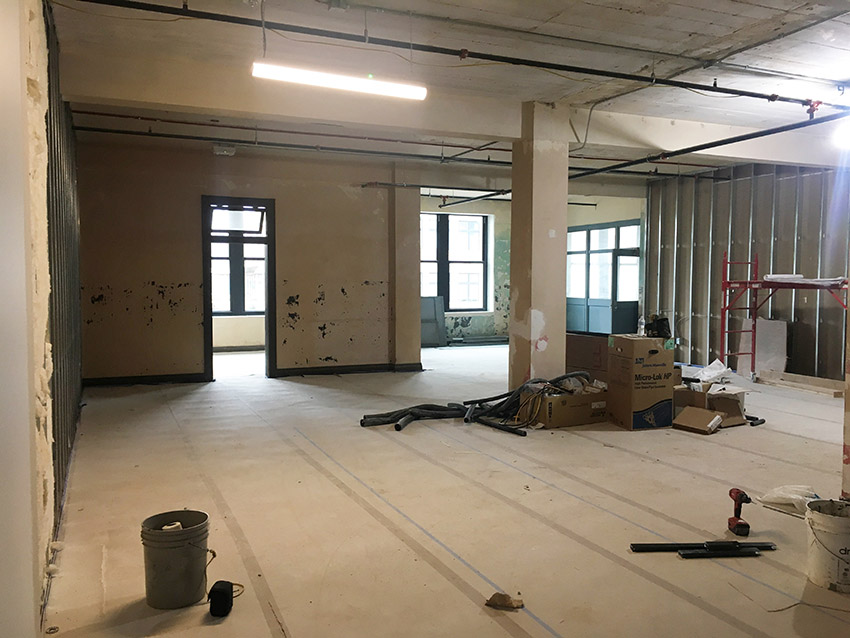 The second floor still has some historic office walls, such as the one in the back corner with the open door.

Orange Leaf frozen yogurt company is moving its headquarters from northwest Oklahoma City into the second floor, which will share space with Studio Flight.

The first floor and third floor are still available. Each floor plate measures about 6,000 square feet.

Travis said he thinks he’ll get more interest in those available spaces when Parlor opens in the eastern building and people realize they could have an office next to seven restaurants and two bars.

The restaurants are a mix of locally-owned and Kansas City-based concepts. The announced restaurants are Burger Pig, El Guate, Graffitti, Providence Pizzeria Co., Sura Eats, and a return of Parchinko Parlor. The seventh eatery hasn’t been announced yet.

“I’m not entirely sure people are aware how great this is about to be,” said Travis.

Hufft architects designed the eastern building’s interior, including how the four kitchens and a bar would be laid out on the first floor, and the three kitchens and another bar are placed on the second floor. There’s also a rooftop patio.

Scaramucci said AHMM worked with Hufft on getting approval for a large cutout on the first floor that improved the building’s flow. National Parks Service, which oversees the tax credit program, usually doesn’t support changing a building’s corridors.

AHMM salvaged old lights from the buildings and were able to reuse them in the building. The rooftop patio will have plenty of greenery, like the roof that hangs over the walkway between the two buildings. A sun shade on the patio will move to make sure the sun is blocked at all hours of the day.

There also at least a dozen new trees on the site.

“It’s a green oasis in the backside of this building,” Scaramucci said. “It’s a little reprieve from the concrete jungle, without hiding it.”

Travis said his team is excited about the entire development, especially with Parlor moving into the city.

“This will be a place you want to come and hang out,” he said.