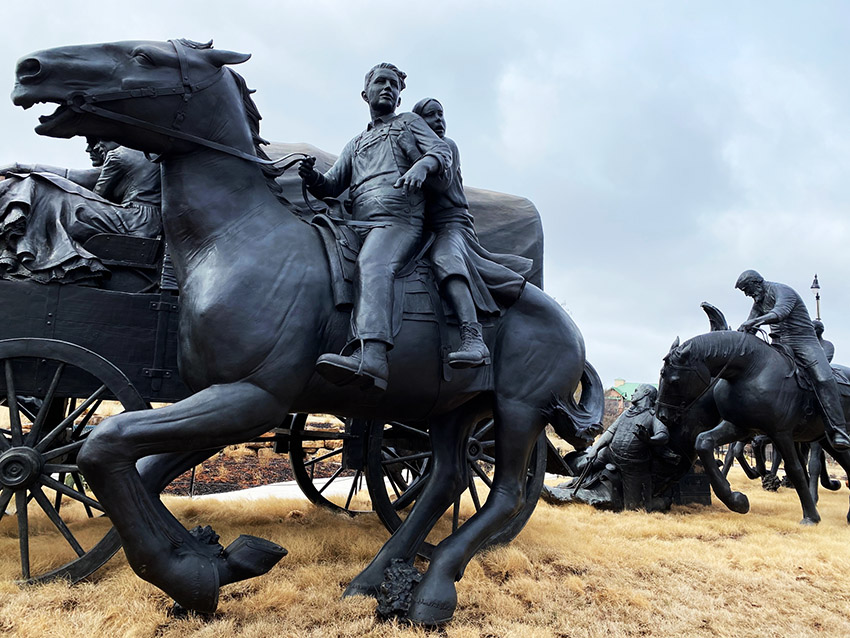 The two children on horseback were styled after sculptor Paul Moore's grandchildren.

A project nearly 20 years in the making has finally concluded.

The 45th and final piece of the $6.2 million Oklahoma Land Run Monument was installed in December. Sculpted by Norman-based artist Paul Moore, the heroic-size statues show the charge and force of the settlers coming to Oklahoma City to claim land.

The last piece features two children on a horse, who were styled after Moore’s grandchildren. The sister is holding on to her brother as the horse gallops forward.

The project started in 2000, but there were a lot of moving parts to get it going. The city’s grant money took a while to arrive, with state and federal dollars helping to cover the costs as well. Another contract was signed in 2003. 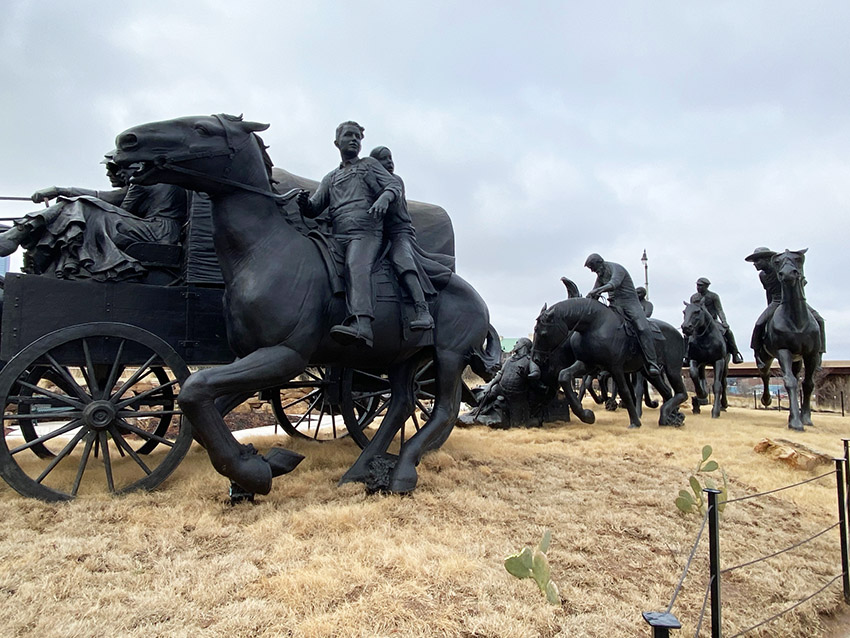 Early discussions on the location included putting it on the state’s property, but that would make it a state’s responsibility. The city decided to take the reins on it and put it near the canal.

There was an early perception that it would be done by the time the city celebrated its centennial celebration in 2007, but there’s no way that would have ever happened, said Jane Abraham, community and government affairs manager at the City of Oklahoma City.

“It’s just taken longer than originally anticipated,” she said. “It got started late because of delays in the earlier process. The price of metal went up. The initial metal bid was much lower than the actual costs. It’s been a difficult journey.”

Abraham moved into her role in 2006 and by that time, there were 12 sculptures standing on the site, which sits at the southern point of the Bricktown Canal. Work on the monument slowed for a couple years.

Besides the financial costs, there has often been construction near the site, with Interstate 40 being relocated, the Oklahoma River being created, the Bass Pro Shops’ Outdoor World opening, and the connection built from Bricktown to the Boathouse District.

“Now that it’s done, I think we’ll do more to highlight the location,” said Abraham.

The city’s office of arts and culture is working on a marker for the site now, explaining the work and who created it.

For Moore, finishing the monument has brought mixed emotions. He’s worked on the project for so long, he said, so now he has to start realigning his time and direction. While he’s happy to have the space in his studio, he said he’ll miss working with his sons. They’ve helped him since the project started.

“It’s nice to not be on scaffolding right now,” he said with a laugh.

He said the last piece was his favorite. His daughter went into labor with her son – the boy on the horseback – when the wagon piece was installed. Her son is 14 years old now.

“That last piece has a lot of emotional ties,” he said. “It shows the time frame of creating the sculptures.”

But the work has caused back, knee and neck issues for Moore and his two sons. Moore has had five back surgeries, as well as his youngest son.

“We’ve suffered a lot of injuries to make it happen,” he said.

By completing the work, Moore stands out among sculpture artists as being the sole creator of a project this size. Abraham said often these projects involve multiple artists, but Moore tackled the entire monument. 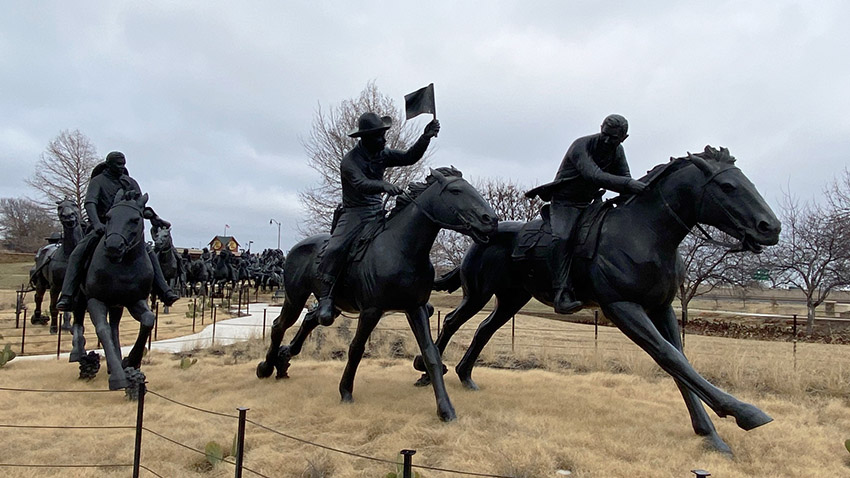 There’s a lot of moving and maneuvering to get each piece done. First, Moore sculpts the figure in clay. Then, it’s covered in a rubber coating to make the mold. The molds head to a foundry where the inside is covered in plaster and metal. It takes a small crane to put them into place in Oklahoma City.

“When it first started, it was the largest freestanding sculpture in the world, but others have been done since then,” Abraham said. “The process is just so cool.”

The Land Run Monument is one of 155 commissions that Moore has done to date, including several statutes at the University of Oklahoma, such as Bob Stoops and The Seed Sower.

Moore said the Land Run Monument is a project that comes around once every 100 years.

“Even though it was exhausting and my sons and I endured a lot of wear and tear through it, I was happy to be a part of it,” he said.

Abraham said it feels really good to have it completed. The project was first started by Kathie Wrights, who has since passed away, so Abraham wanted to make sure it was done correctly in honor of Wrights.

“People have kept saying, ‘It will be great when it’s finished.’ But it’s been great the whole time,” Abraham said.