It's a question Gary Brooks has heard many times over the past few years.

"What made you decide to take this on?"

As the renovation of the venerable First National Center continues, Cornerstone Development’s Brooks took some time to take a group of downtown stakeholders on a one-of-a-kind “virtual tour” a couple weeks ago via the magic of a combination of an iPad and the videoconference technology we’ve all become so familiar with lately. 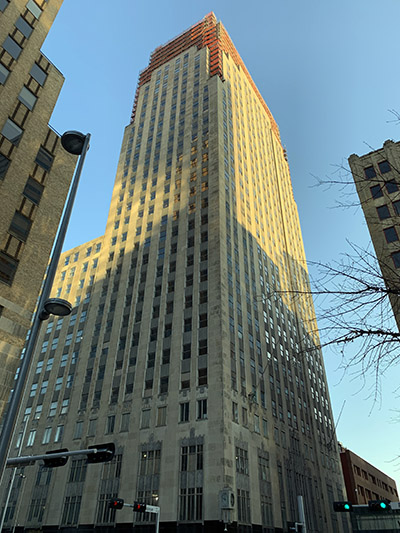 The large numbers commonly used to describe the project—32 stories, 1.1 million square feet, 45 million pounds of debris removed, 2,600 windows to be cleaned or replaced, one of the largest asbestos removal project in the U.S. of 2017, a total cost north of $275 million—do little to explain what the renewal and rebirth of the First National Center into housing, apartments, retail and dining actually means to OKC. Originally built in 1931, for decades the iconic 31-story art-deco style building was a focal point of downtown activity, with its hallowed Great Banking Hall serving as the heartbeat of Oklahoma City commerce, deal-making and business large and small. After falling into the hands of a series of out-of-state owners and neglect, downtown observers worried about the fate of the landmark as occupancy plummeted and necessary maintenance was deferred. When Brooks and partner Charlie Nicholas came forward with a plan to purchase, save and revitalize the building in such a comprehensive, imaginative manner cheers and relief openly followed.

Thus, there is no dearth of fans of the work, though there may be some that wonder, "What is going on in there?"

“It’s probably the most iconic building in Oklahoma City – certainly the one that was on the most postcards through the decades.” –Former Mayor Mick Cornett, City Council meeting, July 5, 2017

The Great Banking Hall, soon to be lobby to the hotel, living room for apartment residents, social hotspot and event destination, is currently undergoing an extensive restoration by Evergreene Architectural Arts. One of the milestones Brooks says he was looking forward to most, specialists from the Brooklyn-based firm have begun to arrive and are busy cleaning, restoring, stenciling and applying hand-painted special canvases to restore and repair the ornate hand-detailed ceiling on scaffolding 45 feet high. Brooks remarked on the state of the ceiling, noting all the cleaning that has to be done even before restoration can commence in earnest. “You had people smoking in this room for decades,” he said.

Aside from the historical significance and effort to save the work of artisans three generations past, Brooks himself has a soft spot for the space. “If you’re a hotel guest, this is your lobby. I like to go sit in lobbies when I stay at hotels, particularly old hotels.  And if you live here, we want you to feel like this is your living room – we want you to meet people and have coffee and feel like this is your space.” Hence, there was a need for a great deal of due diligence when planning and figuring out how elements like seating arrangements, materials, lighting, etc. would work best within the historical framework indicative of the space. “It  took a long time to get to where we felt good about how all of the public spaces will work together,” Brooks said.

“It was just incredible to see the enthusiasm that people from all over the city have for this building… there’s a great love for this building and that banking hall… people have so many memories. It will be a wonderful experience to have this brought back to life.” --Former Councilwoman Meg Salyer, City Council meeting, July 5, 2017

Evergreene specialists will also be tackling another iconic piece of the iconic building – the vault. Restoration of the vault will unlock another feature sure to please locals. 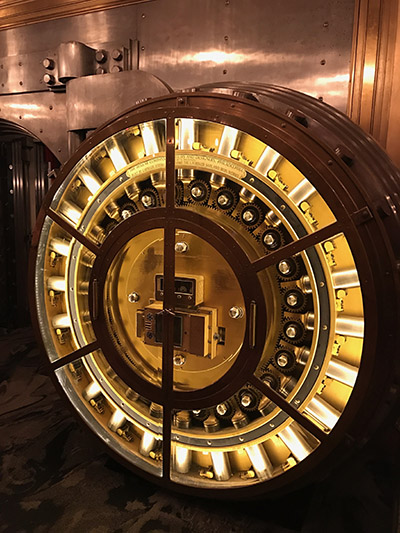 “One of the great spaces we’re going to have in this building is a speakeasy in the vault. I think it’s going to be one of the coolest places in the building. People will come to see the Great Hall, but they’ll want to stay and hang out in the speakeasy,” said Brooks.

“Getting plumbing and electrical connections through 14-inch concrete vault walls was difficult. But we will have two bars in the speakeasy.”

In addition to the Great Hall, another favorite public spot of the past will also make a reappearance, albeit in a different location. “The barbershop was originally on the 14th floor, and a lot of big stories were told in that barbershop. It’s a unique part of OKC history with a lot of major discussion happening there. So we’re recreating that in the Gallery–First National's section of the concourse—and we’ll have the barbershop along with other exterior and interior retail in that concourse gallery area, along with the steakhouse,” said Brooke Bale, Planning & Development Manager at Cornerstone Development. There will be six eating / drinking outlets, two ballrooms, and private dining in the building.

More obvious to the public on a day-to-day basis is the conversion of the non-historic center and east buildings of the complex to parking. Replacing office space on the east side will be a ramping system so cars can get up and down without having to loop around the garage. “It’s an efficient system allowing traffic to move up and down the 12-story garage quickly,” said Brooks. 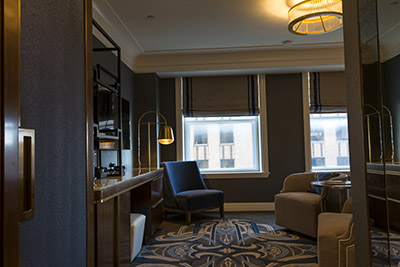 A model hotel room in the First National Center

“You’ve got an entire city pulling for you to get this done.” –Former Mayor Cornett

Back inside the tower, about half the apartments on the upper floors are finished in terms of electrical, plumbing and sheetrock, including the original windows. Though stripped of lead and cleaned, the National Park Service recommends that the original windows stay in projects that involve Historic Preservation Tax Credits (one element of a mélange of financing mechanisms necessary to make the project make sense economically), though interior storm windows will be added. Buildouts of the hotel rooms, which will carry a Marriott Autograph Collection flag, are beginning as well, and no expense or effort is being spared to make sure the products reflect Brooks’ vision and high standards.

“We build these models so we can see how they look, what we like and what we don’t, and to verify cost and quality of finish. For example, our first choice of apartment kitchen cabinets looked great on our renderings, but when we put it in the actual model kitchen, it just didn’t work. So we went back and tried something else until we found what did work,” said Brooks. 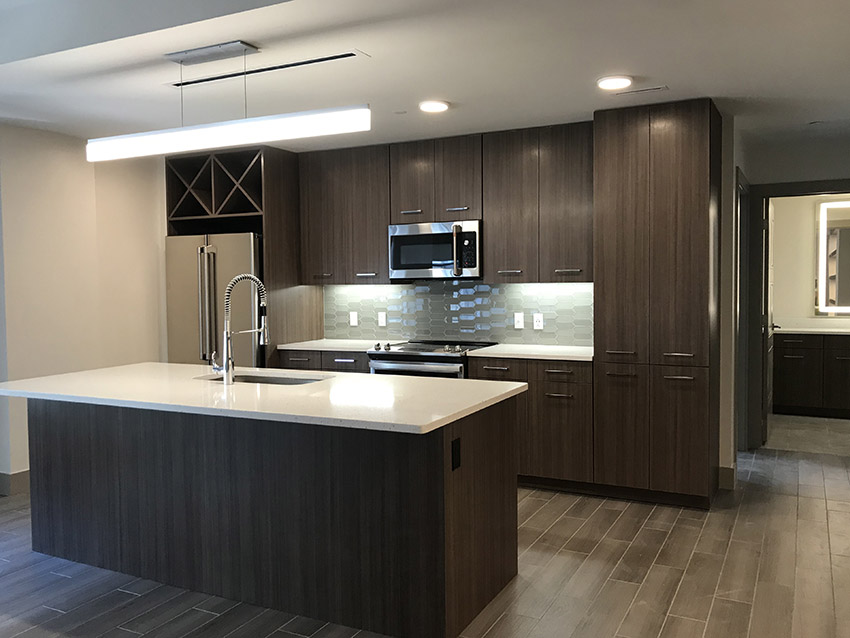 A model apartment in the First National Center

“Gary likes to test everything, including shower handles and doorknobs, and make sure everything is the quality we need it to be before he signs off on it,” said Bale.

There are other unique amenities on the way for residents to enjoy, including a pool, pet park, grills and areas for hanging out on a specially engineered 14th-floor rooftop. “It’s so heavy they had to pour 240 yards of concrete for reinforcing to handle the weight of the amenities on the 14th floor roof,” said Brooks. In addition, apartment units vary in size, from 600 square feet up to 3300 square feet. Echoing a theme for the entire project, Bale noted, “We want everyone to feel like it’s approachable,” no matter your living style or need.

So, with interior construction proceeding, how close are people to moving in? “Construction is well over 50% complete on the tower with targeted completion the end of 2021.. We have a website up at LiveAtTheFirst.com, and a number of people have expressed interest -- hopefully by February or March we can start showing the model units’ and get people signed up for a particular floor and a unit, and then we can get leases signed as we get closer to summer,” explained Brooks.

“I have to give a shout-out to Manhattan Construction. They originally built this in 1931 in 11 and a half months – less time than it took us to actually purchase the building.” – Gary Brooks

Brooks said the building closed for renovations on January 11, 2017, and thus has been under some form of demolition, design or construction work for four years. “With about a year left, we can begin to see the end now,” Brooks said. “With all that we’ve done, and the respect we’ve given the building, I think people are going to love it.”

So, why go through all this when easier development opportunities were surely available?

“In 2015, I saw The Great Banking Hall at Christmas time, and I had a vision… I just felt like I was supposed to be involved.”