A ribbon-cutting ceremony, attended by officials including Oklahoma Sens. Jim Inhofe and James Lankford, was held Friday to celebrate the opening of two of the new KC-46A Pegasus’ maintenance hangars, part of the single-largest construction project to hit Tinker Air Force Base since the 1940s.

The new 156-acre maintenance campus will eventually boast 14 hangars, single-bay and double-bay, with facilities to handle maintenance, repair and modification operations. The campus will also feature a system integration laboratory and new taxiway as well as a substantial area for future expansion.

“Today marks the beginning of the KC-46 era at Tinker Air Force Base and the Oklahoma City Air Logistics Complex,” said Lt Gen. Gene Kirkland, commander of the Air Force Sustainment Center. “It’s no accident that our Air Force leadership selected Tinker Air Force Base for the Pegasus Depot Campus given the base’s long track record maintaining the legacy KC-135 refueling aircraft and bolstered by a world-class workforce and unmatched community support.”

“This is a truly great day, not just for Tinker Air Force Base, but for all of Oklahoma,” Inhofe said.

“This is an incredible space that is a result of a partnership between the state, city government, the Chamber, obviously the federal side, as well,” noted Lankford. “When the Air Force looked to where the best place to do this maintenance would be, they looked at the professionals here in Oklahoma and said they’re doing excellent work. This is a very significant moment for our state and the jobs in our area.”

“These facilities will support and sustain the future of rapid global mobility of the United States Air Force,” said Brig Gen. Chris Hill, commander of the Oklahoma City Air Logistics Complex. “This is a tremendous vote of trust and confidence in the professional knowledge, skills and abilities of our team.”

“Since the birth and initial growth of Tinker AFB in the World War II era, nothing is bigger from a military construction perspective than the KC-46A campus,” said Col. Paul Filcek, 72nd Air Base Wing commander. “This campus will enable the global projection of air power for the next generation and generations to come.” 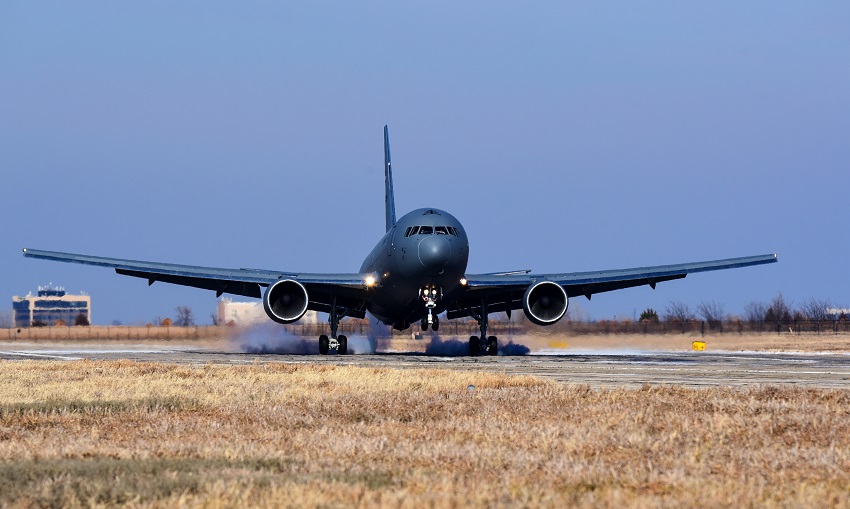 A KC-46 Pegasus Tanker, like those that will be maintained at Tinker Air Force Base

The segment of the campus that was unveiled represents the first portion of a massive project that is expected to run through fiscal year 2029. “Work began on the campus in July 2016 and has progressed steadily despite several delays and minor complications,” said Mark Harbaugh, the 72nd Civil Engineering Squadron’s project manager.

The first hangar, which Harbaugh describes as a plane garage compared to the other facilities, will allow crews to do basic maintenance work. The second project, the two-bay hangar, is around 85 percent complete and will allow crews to perform maintenance, corrosion control processes and fuel cell work, thanks to blast-resistant infrastructure and a major heating, ventilation and air conditioning system.

The next leg of the construction project will begin in fiscal year 2020 and will include two additional two-bay hangars, one capable of performing the same fuel cell work, as well as a fuel system that will allow for the KC-46A to have the integrity of its fuel processes checked, and the other for basic aircraft maintenance. A three-bay hangar is scheduled for fiscal year 2021.

“This whole complex will allow them to perform any level of work on the KC-46A, whether it’s just to check the oil and kick the tires or a complete strip it down and rebuild it,” Harbaugh said.

The area that now houses the KC-46A campus was an abandoned rail yard purchased from the Burlington Northern Santa Fe Railway Co. in a joint effort by the Air Force, city of Oklahoma City and Oklahoma County for $44 million.

Several potential sites for the campus were evaluated by the Air Force, but after extensive review the rail yard was selected because it was a suitable site for the campus’ needs. Utilizing the area for the campus also increases the base’s security.

The KC-46A is the first phase of a three-stage effort to replace the U.S. Air Force’s aging tanker fleet. The aircraft features more refueling capacity and enhanced capabilities for cargo and aero medical evacuation, with the manufacturing and engineering contact being awarded to Boeing.