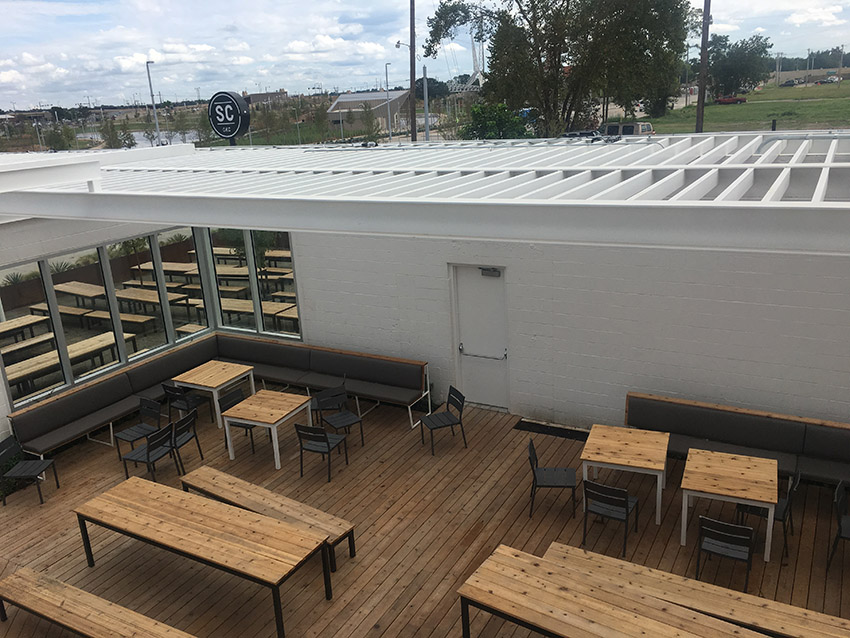 Social Capital's sign sits on top of the existing sign pole. The restaurant and bar has ample outdoor seating.

A former transmission shop will soon be a hot spot when the MAPS 3 Scissortail Park opens on Friday.

The shop is now known as Social Capital, a restaurant and bar, with a renovation designed by Chamber member Allford Hall Monaghan Morris and operated by CTB Group. The group, whose initials stand for Community Through Beer, also operates The Patriarch in Edmond.

AHMM Associate Director Wade Scaramucci said the big driver of the bar’s design was how the architecture team pulled the park into the building and the building into the park. 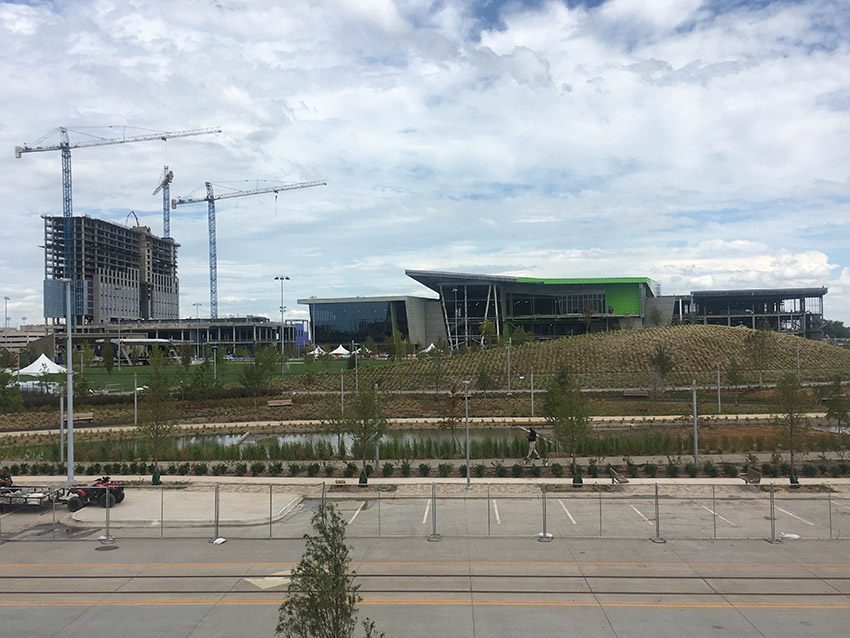 Guests can see the new park and the convention center and Omni hotel construction from Social Capital's second-floor deck.

“We asked, ‘How do you make it so everywhere you look, you’re reminded constantly of the bigger offer’ which is the park,” he said. “We wanted to be intentional on what the park was trying to do. We see this as the part of park that you can eat, hang out and drink in, as opposed to the park that you pass through.”

Bryce Thompson with CTB Group said AHMM’s design was nothing he and his partners would have expected.

One of the biggest undertakings for the renovation was removing the roof. Scaramucci said that wasn’t too hard, actually, because the roof was practically gone anyway. Having a rooftop area would not only give more space for people, but it would also add another view of the park. The rooftop provides a panoramic view of the park, the MAPS 3 Convention Center and the Omni Hotel.

Another way people are able to not lose sight of the park is with all the windows and large doors. Garage door openings that were part of the transmission shop were used with either moveable garage doors or windows that filled in the existing opening. The building already had windows along the top of the first floor’s main room.

The AHMM team was strategic in putting in the windows into what was once a front garage door. Scaramucci said making that a door as well would have taken away from main entrance created with the courtyard space and the grand stairs. The main entrance helps direct people to the many offerings at Social Capital. Guests can go upstairs to a bar, go inside to get food and find the main bar, or sit out on the patio where they can a find a smaller bar.

The entrance to the private room has sliding doors featuring a wood pattern, with wood that is from The Patriarch. The doors are moved by metal handles that when connected display Social Capital’s logo, which pays homage to a gear shift. 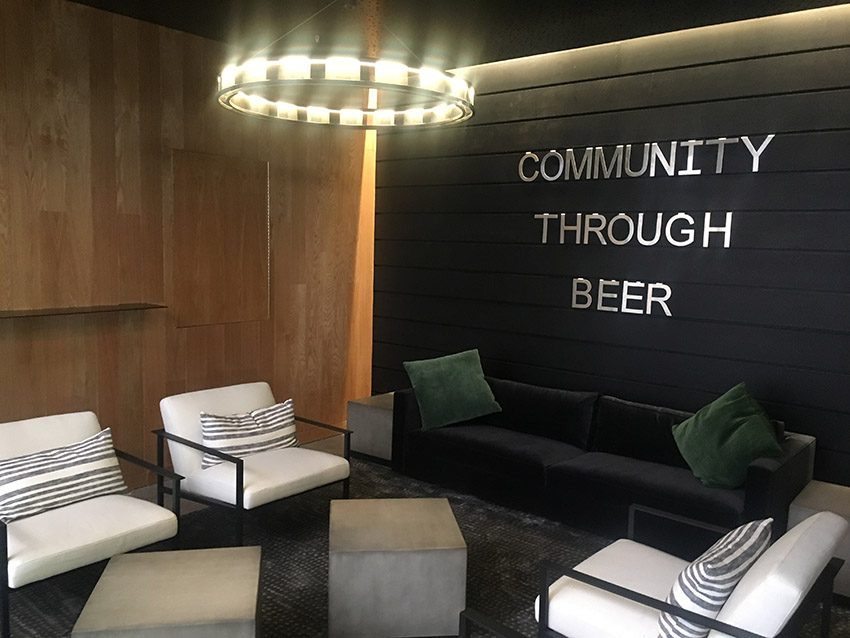 The private, rentable room at Social Capital has cozy seating and direct connection to the outdoor bar.

The private room was inspired by a constant request for a rentable space at The Patriarch. The Social Capital private space on the first floor has a connection to the outside bar and movable letters on the wall so people can display a special message. Scaramucci said connecting the bar to the room was a request from CTB and something they were pleased to make happen.

While the park is the main attraction around the building, inside guests’ eyes immediately go to the large glass windows behind the main bar, with kegs connected to 84 taps. The taps currently have Oklahoma-made beer, but that the offerings will rotate with out-of-state breweries as well. 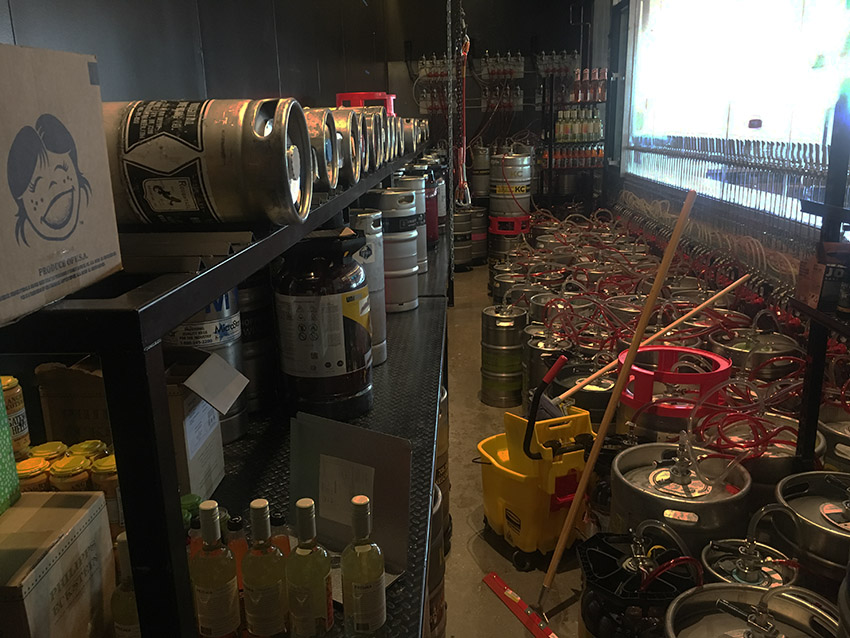 It takes a lot of beer to keep 84 taps full. This is all the beer behind the glass at the Social Capital main bar.

Scaramucci said CTB wanted people to see how beer goes from the keg to tap and into their glass. But the look also creates an appealing focal point.

Yet, as pretty as the glass and kegs can be, it’s hard to not keep looking across the street at Scissortail Park. On the second floor, where the view is best, even the edge of the patio is glass so people won’t lose sight of the new destination. The patio also has roughly-mirrored panels on the overhang so people in the park can see the activity upstairs.

On the first floor and onto the patio area, grassy berms provide a flow around the space, while covering a metal fence. This helps the patio look connected to the park from the outside and makes guests feel like they’re inside the space.

Scaramucci said Social Capital is likely the only existing building that will remain as commercial development moves in around the park. He said he was happy his team was able to revive it.

“I’m very pleased to have brought some commercial life to the park that will be contributing so much to the city,” he said. “Hopefully that’s a hallmark of all our projects. That’s what we’re going to keep doing.”

Thompson said he even if the park wasn’t built, he and his partners would have opened Social Capital in the building, though it would looked different.

“With the Oklahoma City Thunder, the convention center and hotel and all the other development, we wanted to be a part of the excitement and be another place to find great hospitality in downtown,” he said.