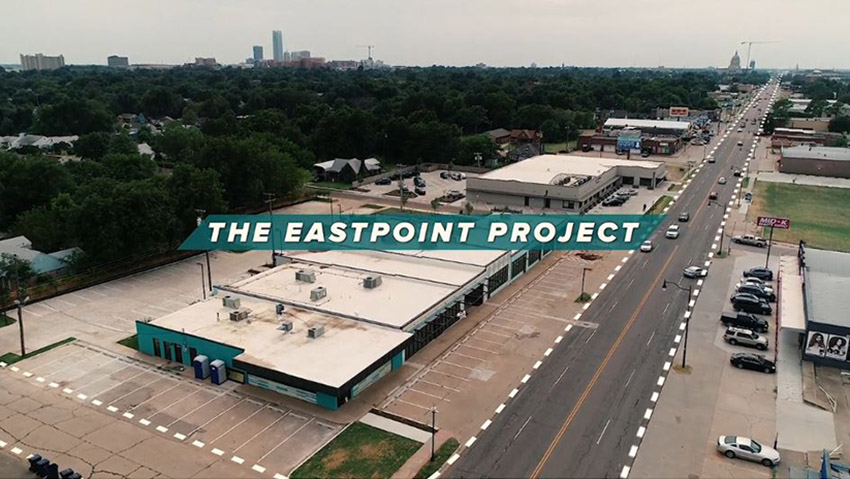 The EastPoint redevelopment project in northeast OKC has caught the eye of the national American Institute of Architects office.

For the last two years, the Pivot team has been working to redevelop two buildings on NE 23rd Street. N. Rhode Island Avenue runs between the two buildings. 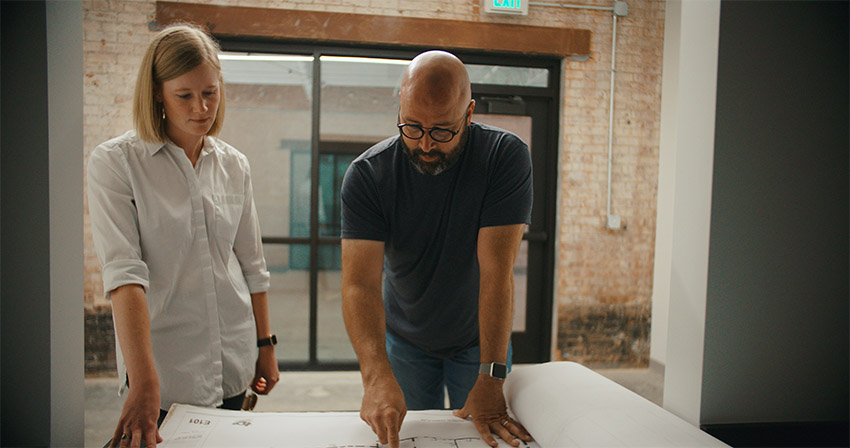 In a still from the film, Waugh and Gardner look at plans for the project.

Gardner and Waugh were tasked with turning what had once been five buildings into one multi-tenant building.

“This project was really reverse engineered,” said Gardner. “We knew what the final costs needed, so we had to keep that in mind as we looked at the size of the spaces and the materials we used.”

One of the central buildings was removed, creating a connecting breezeway, allowing for visitors to easily move between the back and front of the building and gave the building more street appeal. When the final building was complete, there was room for 12 tenants, with spaces ranging in size from 750 square feet to 3,500 square feet.

Pivot worked with the City of Oklahoma City to get the buildings in a tax increment finance district. The TIF allotment helped with construction costs. Every building tenant will have equity in the project, so they’ll have stake in making sure the center stays occupied. 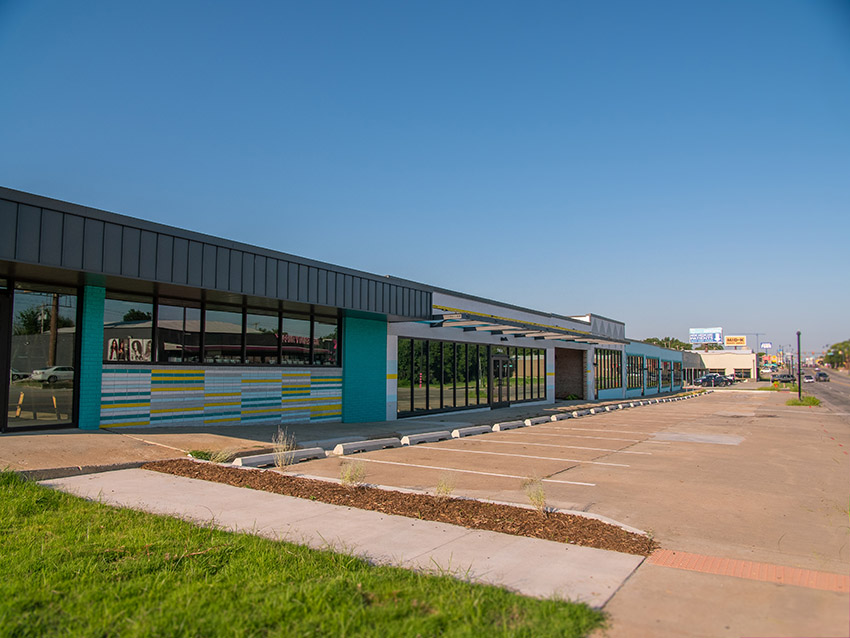 The center is about 60% leased to date. New tenants will include the cocktail bar Kindred Spirits; Intentional Fitness by Emmanuel Sonsanya; a burger restaurant operated by northeast resident, advocate and rapper Jabee Williams with a partner from California; an optometrist; a travel agency; an art gallery and studio; and the office for Oklahomans for Criminal Justice Reform.

With all the thought that went into making sure the space would remain an integral part of the northeast community and with the City of Oklahoma City having a key financial role, Waugh and Gardner thought it would be a great fit for the AIA film contest. AIA was looking for stories of projects that created a “blueprint for better,” searching for developments where architects and civic leaders worked together to create a resilient and sustainable community.

“We looked at sustainability in a different way than a typical ‘green’ project,” Waugh said. “We looked at a community that was already resilient and trying to sustain itself by reinvesting in the people and places that were already there.”

Marketing Director Ben Nockels added, “We weren’t trying to transplant people and make this retail center a destination. It was more about how to recreate the fabric of the community.”

Architect Zack Woods saw a prompt for the AIA Film Challenge project coming together in his office and knew Hana’s husband, Weston Waugh, was a videographer with a passion for storytelling. Woods asked if Weston would be interested in creating a submission for the film contest.

Weston Waugh was on board quickly and suggested EastPoint. He knew the story since Hana had been working on it.

“He had heard me talking about it, so from the outside looking in, he felt like it was a story that needed to be told,” said Hana Waugh.

But the Gardner team knew it was only a small part of this story, so the film couldn’t be solely about their architecture. The district itself has a decades-long history that includes some challenging aspects. In the film, northeast residents Williams and development partner Sandino Thompson touch on the issues the area has seen as well as the opportunities ahead. Pivot partner Jonathon Dodson talks about the goals for the development and what Pivot hopes will happen next.

There were hours of film and interviews, and it all had to be condensed down into five minutes. The Waughs storyboarded the interviews and spent many hours, across a span of several days, putting the film together.

“We realized through the film-making process that there was a much-larger story to be told about the resilience of the community on the eastside,” said Waugh. “The story isn’t about the building or the developer. It’s more about the conversations that have been spurred from reinvestment in this community.”

The film has captured international attention. It premiered at Chicago Ideas Week, where it was the final film of the event and moderated by AIA National President-elect Peter Exley. It’s also been shown at the Architect and Design Film Festival in New York and at events in Toronto and Vancouver, Canada. In February, Gardner and Waugh will head to New Orleans for the AIA Grassroots conference, where former Oklahoma City Mayor Mick Cornett is the closing speaker and the film will be shown.

Gardner said working on the EastPoint project exemplifies the work he wants to do. He said while architects are known for wanting to wow people with beautiful and design-forward work, sometimes it’s more about how can a building serve people in the best way possible.

Working in the area has inspired the firm to continue to be involved. A portion of the $5,000 contest prize money will be used to start a scholarship through the Oklahoma City Communities Foundation. The scholarship will be offered to high school students from northeast Oklahoma City who express an interest in a design-related degree.

The ultimate goal with the scholarship is that the students will return to the northeast side and help to revitalize the community in a sustainable way.

“We want them to have more than a seat at the table,” said Nockels. “We want to come alongside them that they build the table.”