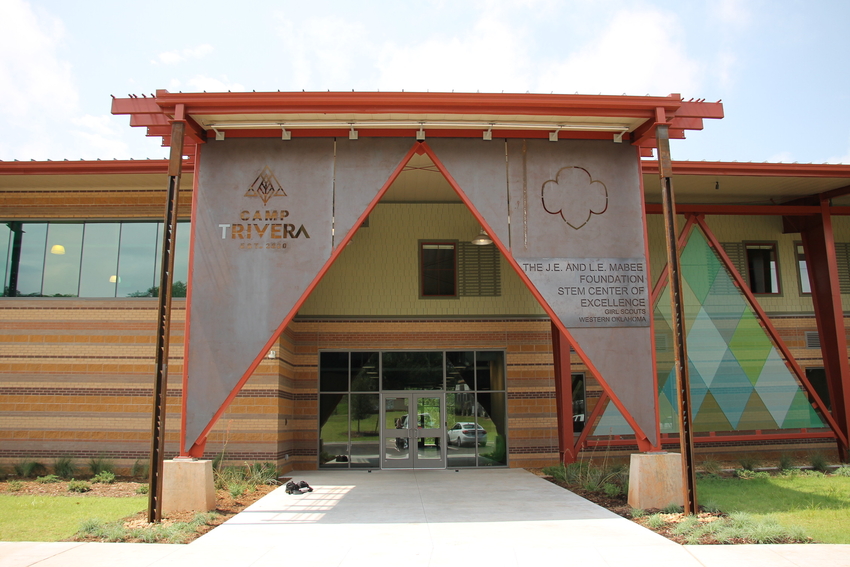 Girls Scouts Western Oklahoma girls aren’t simply showing up to their new camp. They’ve been involved in the design and construction of Camp Trivera since day one.

The camp opens in September and will be one of eight STEM Centers of Excellence within the Girls Scouts of the U.S.’s system. The first center is in the Dallas area.

Because of the Girls Scouts’ focus on science, technology, engineering and math, a construction project was an ideal time for the girls to learn another situation in which those principles applied to the real world.

“We wanted the girls to have the opportunity to learn, so it was important for us to pick partners that allowed them to do that,” said Shannon Evers, CEO of Girl Scouts of Western Oklahoma.

“We have lots of great architects and interior designers – all who happened to be women – who were thrilled to work on Camp Trivera with the girls,” he said. “The girls were full of energy and had some creative ideas. Ultimately, it reminded us the value of designing for the end user.”

But the camp will be more than a site for Girl Scout activities. It can be rented for private use as well, with indoor and outdoor spaces available. 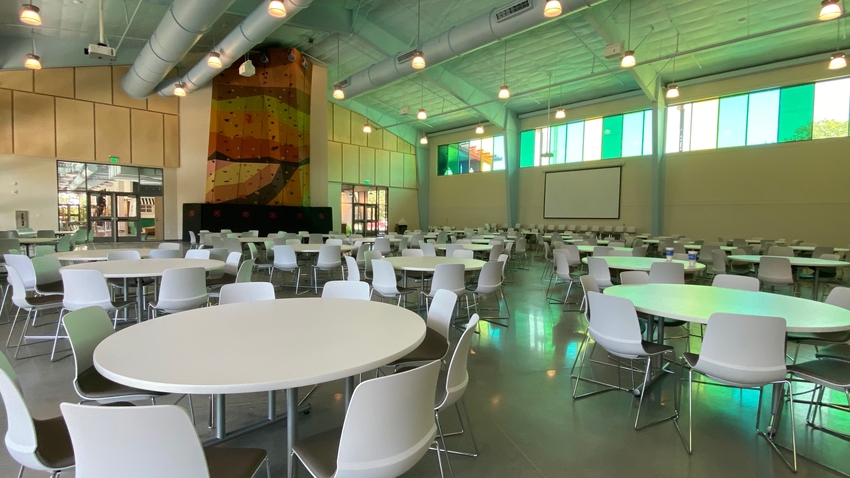 The main building is nestled under trees, with three tree houses and an amphitheater spread throughout across 17 acres. Inside the two-story main building, visitors will be able to attend events in the 350-seat gathering space. The connected kitchen was designed to accommodate the event space’s needs, but also be a place for cooking programs, one of the tastiest STEM activities.

A rock wall as well can be found in the gathering space and is another STEM opportunity. As the girls climb up the wall, labels will point out the different layers of rock in the earth’s surface. The exterior bricks were designed with a geology lesson in mind, too, with different brick colors strategically layered.

Outside the kitchen is the pool, a necessity at any summer camp. The Camp Trivera pool reaches 10 feet in depth so the girls can work with underwater robots. In addition, there’s also plenty of room to practice rolling a kayak in the water. The exterior wall can be used for movie nights.

But visitors to the building never leave that feeling of being surrounded by the wilderness with wide windows spread through the building. Even in the STEM lab, visitors can see the wilderness in front of them and in the back as they peer through a glass interior curtainwall then glass exterior windows. 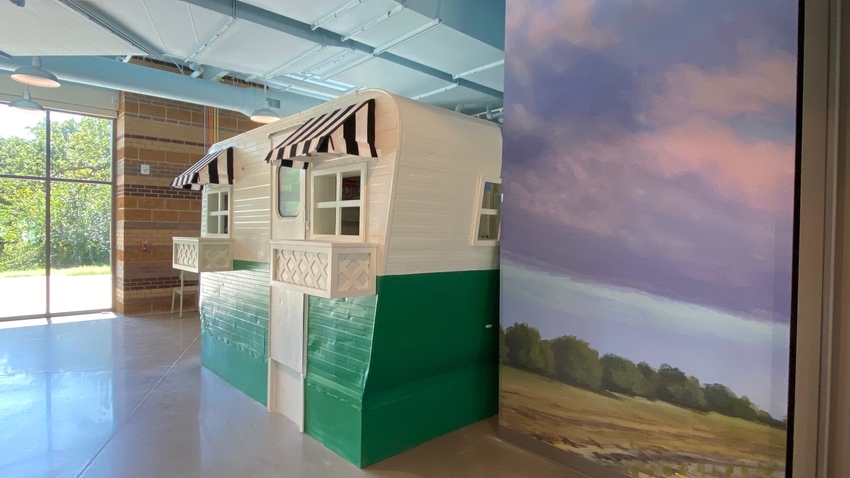 The outside comes indoors again with a small travel trailer on the first floor that was turned into the trading post. That’s where the girls will be able to buy snacks, swag and other camp necessities. 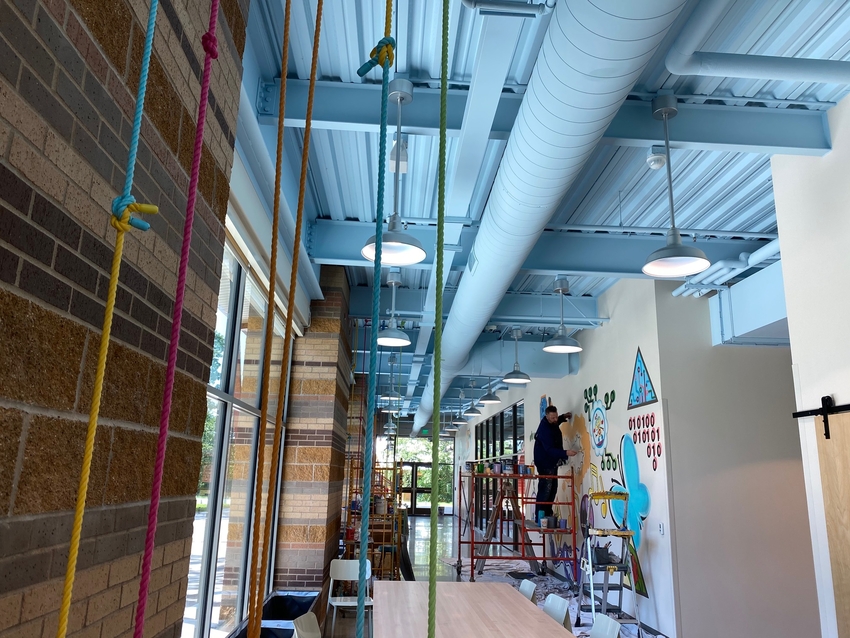 Throughout the first floor, bright-colored ropes help show off the knots that the girls will learn through their time in the program. But the ropes also add more color to the area. Evers said the girls asked for a visualization of the knots and it was the Rees interior designers that came up with the idea of running the bright-colored rope from ceiling to floor.

“That’s certainly something we don’t do every day,” said Karim.

On the second floor is where the girls’ work on the building is seen. One of the most notable requests is the small mailboxes outside each room. But visitors to the floor are immediately in awe when they see the planetarium-like ceiling. The Girl Scouts’ Astronomy Club created the constellations in the black ceiling using tiny light bulbs.

The girls’ help continues into the room. During a fall break camp, Rees and Lingo worked with the girls to come up with the themes of each sleeping room. At the end of the camp, the girls had to present their design idea to the group.

The girls had plenty of demands for the sleeping rooms as well. There were groups that wanted bunk-style rooms, which can now sleep up to eight people and connect to another eight-person room. There was a demand for smaller rooms, too. There are a variety of room styles, with the same diversity in themes, from a caverns to chemistry.

The girls worked in groups, varying in ages, to come up with the themes. The varied themes meant that as the girls returned to the camp for activities, they’d get to experience each room eventually. The Reese interior team custom-made the wallpaper to fit each theme.

On the north end of the second floor, there’s a hangout area and a place to hang hammocks on an outside patio. This patio is where a zip line will eventually connect to the zoo.

Evers said being this close to the Oklahoma City Zoo and the Science Museum of Oklahoma was important for the STEM programming. Younger girls first get interested in the topics through life science, such as animals.

“With the zoo as our neighbors, we’ll have so many opportunities to connect with them on programming,” she said. “This will give us another option when older girls are visiting different councils to learn about their nearby STEM programs.”

Girl Scouts’ overall goal with the STEM center is for each one to have different focus areas, reflecting on the industries in that community. In Oklahoma City, aviation will be one of those areas, said Evers. If an older Girl Scout wants to learn more about aviation, she can come to the camp and stay, where the Girl Scouts Western Oklahoma will work with partners to help her learn more about the industry.

The STEM activities will extend outside as well, where the girls can sleep in one of three tree houses or set-up a tent on one of two camp sites.

When though construction is complete, Girl Scouts aren’t done gaining building-science knowledge. There are endless opportunities inside the new space, with open ceilings showing the duct work. All the air systems will be labeled so the girls will know how each one is connected. Evers said there will even be similar signs in the bathrooms.

“We’re programming everything we can,” she said.

Ultimately, through all this STEM interaction, especially with much of it being unintentional, Girl Scouts Western Oklahoma will help put 2.5 million girls into the STEM workforce by 2025. And many of those girls will likely get to work in Oklahoma City, as bioscience and aviation continue to grow in employment opportunities. Oklahoma employers are struggling to fill STEM positions and that need is expected to grow 8% by 2027, according to the Oklahoma State Chamber Research Foundation. The foundation notes that one way to fill that gap is by diversifying the workforce.