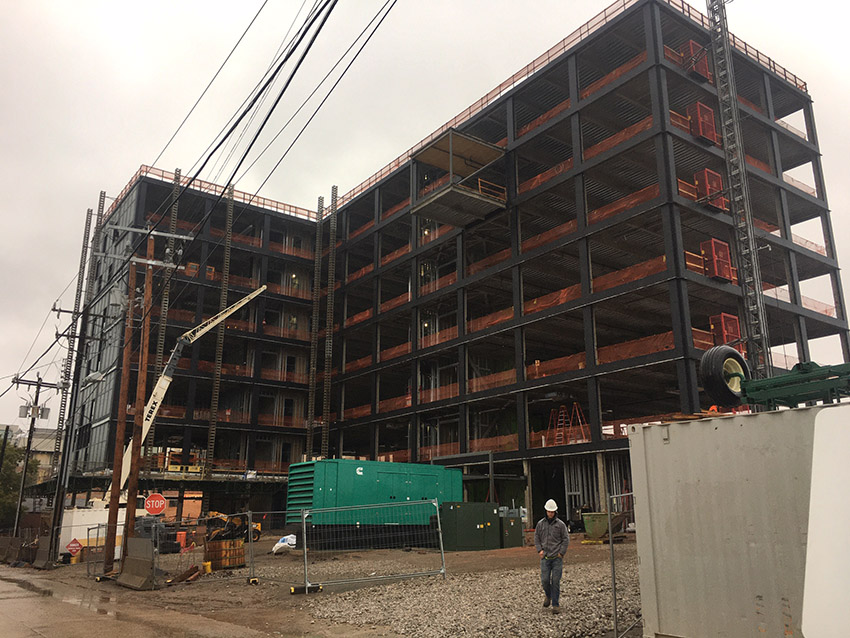 The new Heartland headquarters on Broadway Avenue is an L-shape, with a protected outdoor courtyard.

Heartland has prospered tremendously in its suburban office complex in recent years. The company has outgrown its current space and will move into a new downtown headquarters by next summer.

Vice President of HR Lance Haffner said Heartland needed to hire over 500 people due to its continued growth and its existing location limited recruiting prospects. Haffner said being in the metro’s northern corridor made it difficult to recruit prospective employees from the south and west sides of the Oklahoma City metro.

Heartland, a payments and payroll processing and technology provider, provides a variety of mobile and online payment and point of sale options, as well as customer loyalty and engagement programs, human resources and a variety of other products.

The company employs people who sell the services and accompanying technology products, others who take customer service calls and support the operations, folks who create and develop the technology for all those programs, data scientists who mine through the data to help businesses make better-informed decisions and every other function an operating business needs, including marketing, HR, finance and more.

The company needed a more central location so it visited downtown, taking a tour of the area in 2017 with developer Andy Burnett. He took them around the core on bicycles. Burnett showed the company’s leaders space at his Mideke Building and the Century Center. Eventually, the scouting trip turned from existing buildings to looking for vacant land for new construction. 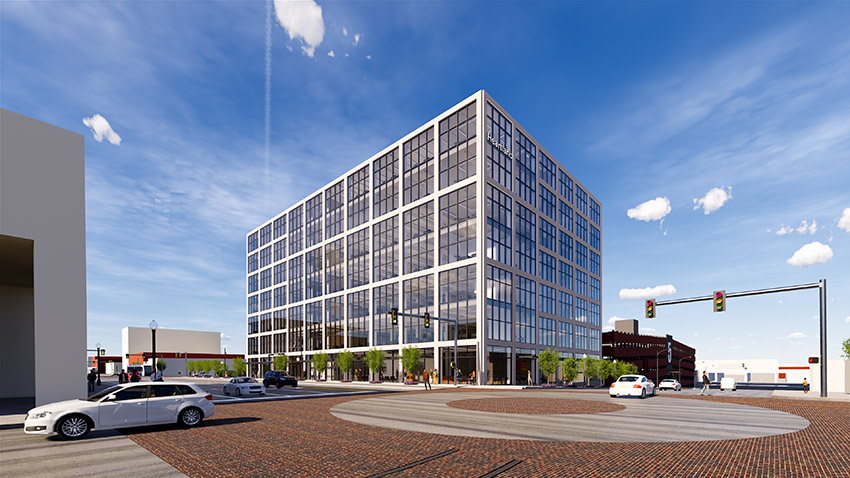 The new Heartland headquarters will open in summer 2020.

With Heartland looking at other cities as well, Burnett said he knew he had to show them something desirable and cost efficient. Rand Elliott Architects came up with the new building design and Lingo Construction Services was hired to put the dollar figures to it. The site at NW Fifth and Broadway Avenue offered an adjacent parking garage, which would help keep down Heartland’s costs.

The location had many advantages for Heartland, said Haffner.

“We felt like having a downtown location would help us draw people to satisfy each of our departments and functional areas,” Haffner said. “For our technology focused functions, this location is in Automotive Alley, putting it in the Innovation District. We’ll be able to recruit the talent we need with such an attractive work environment and central location.”

Construction on the $40-million total project started in July 2018. It’s about 45% complete, said Stan Lingo, president of Lingo Construction Services, Inc. The company has about 120 people on site daily.

Lingo is excited to be involved with the project.  The building is filling in a missing piece along Broadway, bringing more height to the area as it links midtown and downtown, and the project will add about 500 people to the community.

“It’s unique that the building will be fully occupied when we get it done,” he said. “Working with the development team, we’ve all really been pulling together for a successful project.”

Elliott and his team studied the buildings in Automobile Alley to come up with the design. The limestone brick color exterior pulls from the limestone buildings at NW Fourth Street and Broadway Avenue, while the window shape and size was inspired by the existing buildings. Since the site is between the historic Automobile Alley and the central business district, Elliott put larger windows toward downtown where glass curtain walls are popular and the smaller windows are on the building’s north side where a similar design can be seen in the existing historic buildings.

“Being sensitive to the district was important. We never want to copy history,” said Elliott. “But we want to interpret it in a new and modern way.” 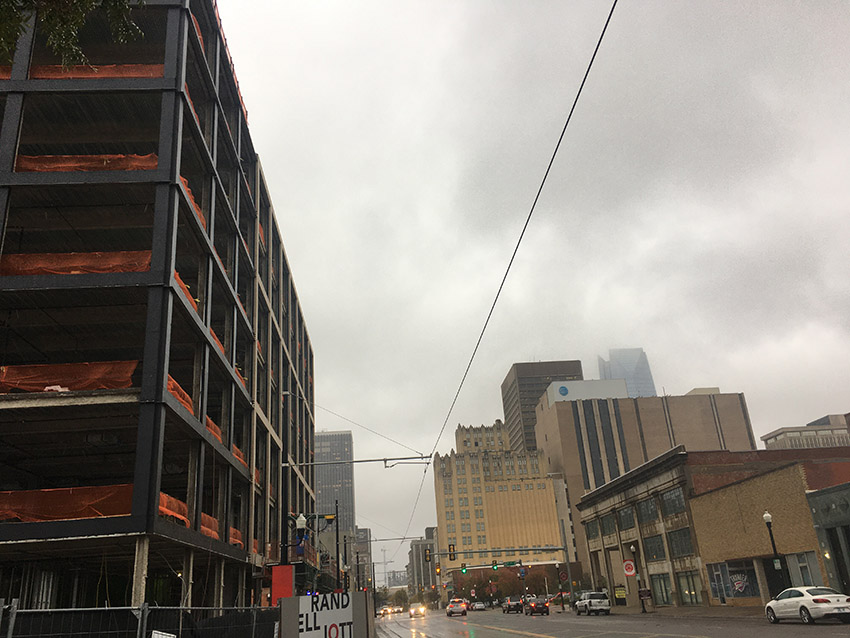 The Heartland building sits along the OKC Streetcar route.

The seven-story, 111,000-square-foot building will have two retail spaces on the first floor, one on the north end and one of the south end. The building stands 100 feet tall, so it qualifies as a high rise, said Mike Mays, principal at Rand Elliott Architects.

From a bird’s-eye view, the building is in an L-shape, with a protected, outdoor courtyard space. There’s also an entry way from the east side, allowing employee access from the parking garage.

The building offers plenty of natural light and spectacular views of the city. Another notable feature is the conference room that appears to be suspended on the building’s east side.

This is Elliott’s second building under construction on Broadway, with the Oklahoma Contemporary Art Center being built at NW 11th Street and Broadway.

Elliott said he felt a responsibility when designing to new additions to the core.

“We didn’t want to do something that’s trendy or a flash in the pan,” he said. “There’s a legacy that goes with this area so you have to do the right thing.”

Haffner said he and the Heartland team definitely think Elliott did the right thing. Haffner was impressed with all the details that the architectural team thought through, such as where the sun would come through during the day.

“Putting our office in downtown in the Innovation District helps illustrate our employer brand,” he said. “I like to say we’re a dark horse. Many people don’t know Heartland. When people get know to our company and our culture, it really sells who we are. The new building downtown will not only offer additional benefits to our existing workforce, but it will be a big advertising tool for us as we ramp up recruiting efforts.”

Ultimately, the steady stream of employees coming to the company’s new headquarters will help diversify the downtown economy, which was a big reason why Burnett said he was interested in being the developer for the company’s headquarters. From the real estate side, his building will be fully occupied when it’s completed, which he said helps him mitigate any financial risks.

Besides the jobs, downtown will gain a new community partner. Haffner said people can expect to see Heartland engaged more than they have been in the past.

Elliott said its projects like this and the Oklahoma Contemporary Center – which will both bring new people to downtown – that thrill him about being in Oklahoma City right now.