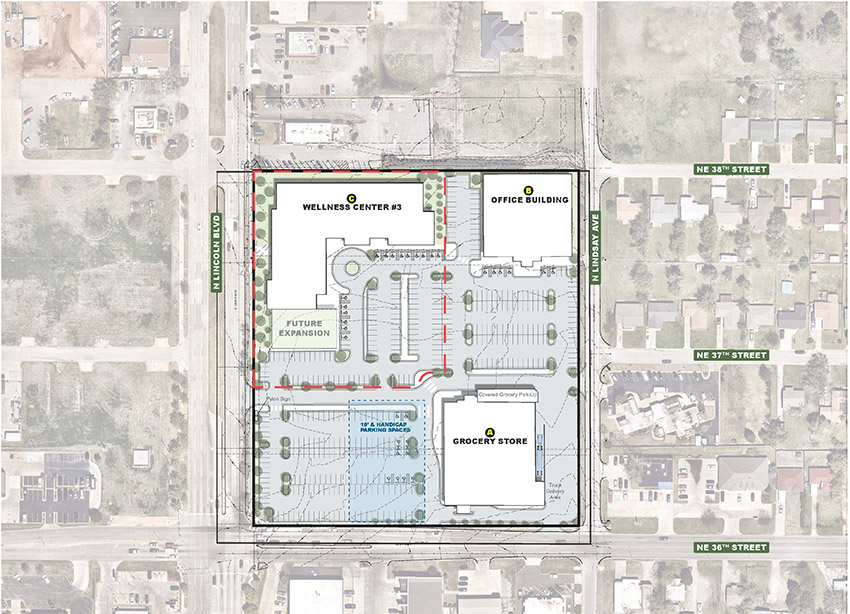 The newest plan for a grocery store in northeast Oklahoma City includes a former NFL star’s investment company helping to bring in the equity.

The Alliance for Economic Development has been trying to get a grocery store in the area since 1993.

Alliance President Cathy O’Connor shared with city council this month the plan that is expected to land the northeast area a grocery store. The site at NE 36th Street and N. Lincoln Boulevard will be home to a MAPS 3 Wellness Center, a Homeland grocery store and the headquarters building for HAC, Inc., which owns and operates Homeland and other grocery stores in Oklahoma, Texas, Kansas and Georgia.

The two retail spaces have an estimated project cost of $11.2 million with another $2.3 million for interior construction on the grocery store and office. The plan will use $4 million in New Market Tax Credits and $4.4 million in tax increment financing.

The entity developing the office and grocery store consists of Endeavor Corp., ESmith Communities and the Alliance. ESmith Legacy Founding Partner and Principal Tamela Thornton told the city council that ESmith Communities focuses on finding opportunities in communities that have been overlooked, with the goal to bring in health, education or wellness opportunities. Retired NFL star Emmit Smith is the company’s chairman.

ESmith Legacy has developed more than $650 million worth of property in Baltimore, Philadelphia and Dallas.

“We like to partner with other users to make sure there’s a holistic solution to a community,” said Thornton. “Our role is to lead the effort in bringing in private equity to the project. We have the debt secured and now are reviewing six terms sheets from equity investors because of what this represents from a holistic standpoint for the community.”

She said the group likes to be part of catalytic projects like this one, where once it’s finished, then other private, local investors will invest in the area as well.

HAC, Inc. is already a part of that community with its office in the northeast. The company was approached in 2016 about opening a grocery store in the area. While HAC, Inc. President CEO and President Marc Jones understands the need for a grocery store, it still had to make financial sense to the employee-owned company. The site offers good visibility and already has an EMBARK bus stop.

O’Connor said there are discussions now to improve the bus stop. She said the store is projected to collect about $242,000 in sales taxes in its first year, though Councilwoman Nikki Nice said she thinks the collections will exceed that amount because the need is so great.

“There’s a real benefit in getting fresh food to people,” he said. “There’s a business opportunity as well as a social opportunity.”

This will be the company’s first ground-up built store in more than 20 years. As Jones explained, HAC operates stores that it acquires. The “A” in HAC stands for acquisition.

Jones said he predicts that the store will not only be used by residents in the northeast area, but employees at state offices and OU Medicine, as well as neighbors in Crown Heights and Edgemere Park.

He said he sees the store as a way for residents to meet that might not have ever met previously.

“Let’s get everyone together at the supermarket,” he said.

And the new Homeland will be able to meet the needs of all customers because the company is used to meeting multiple high demand times in other cities.

“This is an opportunity to serve a variety of customers at different times of the day and certain times of the month. We have that flexibility. We have a commitment as Oklahomans to feed Oklahomans. We’re looking for Oklahoma opportunities where we can do that.”

The 36th and Lincoln site has been one of many considered over the past two decades. Johnson & Associates engineering firm is working to make the site usable so the new construction doesn’t disrupt the surrounding environment.

President and Principal Tim Johnson said the biggest challenge with the site is designing the drainage, which will be spread across the site. Johnson had to figure out not only how to get the water to move off the site, but where it will go.

But the infrastructure below the site was installed before drainage was regulated in 1983, so it had trouble meeting demand. The site had 25% draining coverage when it needed about 96%, said the firm’s Urban Planning Director Mark Zitzow. Johnson was able to create proper drainage into a nearby tributary without disrupting the environment.

The firm also designed the layout of the site, adding in sidewalks to help connect the grocery store to the wellness center and office. Trees will be planted to add shade so people walking will have a place to cool off in the summer. The site will also have plenty of bicycle parking.

The parking lot will be shared by all users and ultimately owned by the city of Oklahoma City, which is building the MAPS 3 Wellness Center. Architects David Hornbeek and Tony Blatt designed the center and have been working on the project for about two years. They’ve been looking forward to getting a site so they could really get into the building’s schematics.

The full renderings are due in February and construction documents are supposed be ready in July, with bids starting in summer 2020.

Hornbeek and Blatt have met with the residents and heard their requests. Unlike the other MAPS Wellness Centers, this one will not have a café since the grocery store is nearby. The center will be operated by Langston University and programmed by the YMCA of Greater Oklahoma City.

Hornbeek said the center’s exterior design will feature similar materials as Homeland so the site’s buildings will complement each other.

Inside, residents will find a four-lane, 25-yard pool with a c-shaped sitting area that is being called a water lounge. The building’s icon will likely be the second-story walking track near the all-glass exterior wall, allowing walkers to see the state capital.

In Edmond, Hornbeek and Blatt helped design the Multipurpose Activity Center in Mitch Park, which houses a senior citizen's center. They said they’ve enjoyed seeing how the MAC has been used by the community. They said they hope to see the same results in northeast Oklahoma City, especially given the success of the other MAPS 3 Wellness Centers. The team also worked on several MAPS for Kids projects.

This project is especially important to Hornbeek who grew up in the northeast area, attending Dewey Elementary School and Northeast Junior/Senior High.

Blatt said, like Thornton, he also thinks this is a catalytic project.

“We look forward to providing something really wonderful for the northeast part of Oklahoma City,” said Blatt.

Jones said he and his fellow owners are excited about the project and what it can do for the community. But he’s also feeling the pressure to make this one come to life.

“We have a lot of folks trusting us to deliver the right solution and we don’t want to let down that trust or disappoint that trust,” he said.

Nonetheless, the process has made him enthusiastic with so many people willing to work together.

“The strength of Oklahoma City is that we have a bunch of people all focused on the same vision. It’s not always the case that you have so many people willing to work together. It gives me a lot of optimism,” he said.