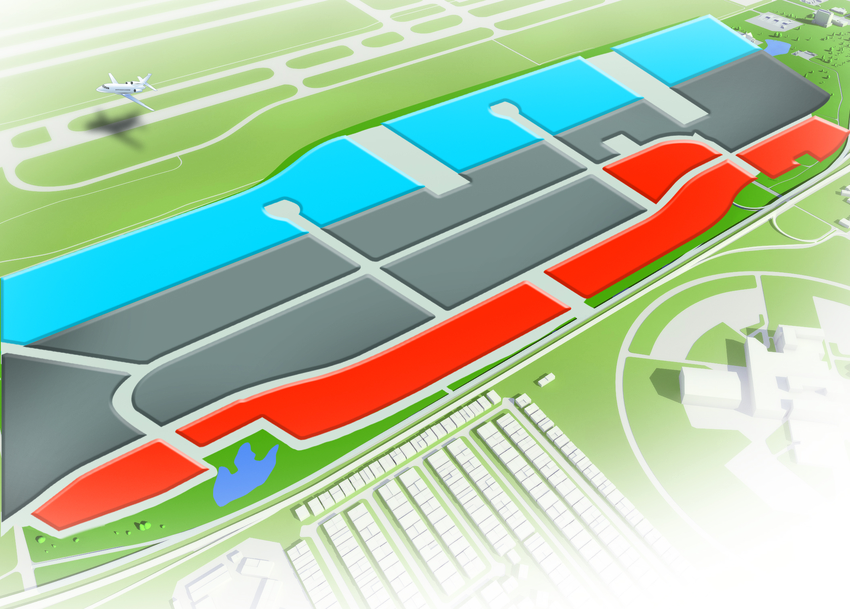 The Oklahoma City Airport Trust is working with Chamber member CBRE to market 553 acres of Lariat Landing, which is adjacent to the Will Rogers World Airport. Lariat Landing stretches from SW 54th Street on the north to SW 104th Street on south.

Airports Director Mark Kranenburg said the Trust wanted to hire brokers to market the site to facilitate faster growth and development. In the last few years, Lariat Landing has been filled in with SkyWest Airlines Maintenance Base, the FedEx Shipping Center and the Amazon Fulfillment Center. OnCue will start construction soon on a new store at Interstate 44 and Portland Avenue., on the south end of Lariat Landing.

But there’s plenty of room remaining, with 401.4 acres designated for aviation use with airfield access and 152.6 acres of industrial/commercial land. Fellow Chamber member Price Edwards & Co. commercial real estate firm is helping Trust as well to recruit more retail developers to parcels between Portland Avenue and I-44.

First Vice President at CBRE Randy Lacey is working with a national CBRE team that works specifically on projects like Lariat Landing. Peter Jansen with CBRE’s Public Institutions and Educations Solutions Group and Karlen Beitman, who works on non-aviation commercial real estate development in PIES, make up the rest of the Lariat Landing team.

Lacey said while the site is a great location, it has a lot of ready-to-go amenities that a potential new tenant would find attractive, such as utilities, access to the tarmac and paved roads.

The city has made the site even more attractive by moving a road. Completed in June 2017, the city spent millions of dollars realigning Portland Avenue from a two-lane asphalt road to an enhanced four-lane concrete roadway. Enhancements included in the construction were curb and gutter roadways, water drainage infrastructure, landscaping, irrigation, signaled intersections, sidewalks and decorate street lighting.

The layout of the road was also changed to a curving avenue, which opened more space to attract aviation-related businesses on the west side of Portland Avenue.

Lacey said he thinks the PIES group will be able to have some great success with Lariat Landing.

“CBRE’s PIES group does this kind of leasing all the time,” said Lacey. “They’ve worked at airports across the country, so they’ll bring a lot to the table in terms of marketing capabilities.”

CBRE started earnestly marketing the property in July, he said, and the team has already received some serious interest. The site can be subdivided for a potential tenant’s need.

“I think this will be a substantial development,” said Lacey. “It’s a long-term project. When you think about DFW, there’s industrial space everywhere out there, so that’s what we’re hoping to do.”