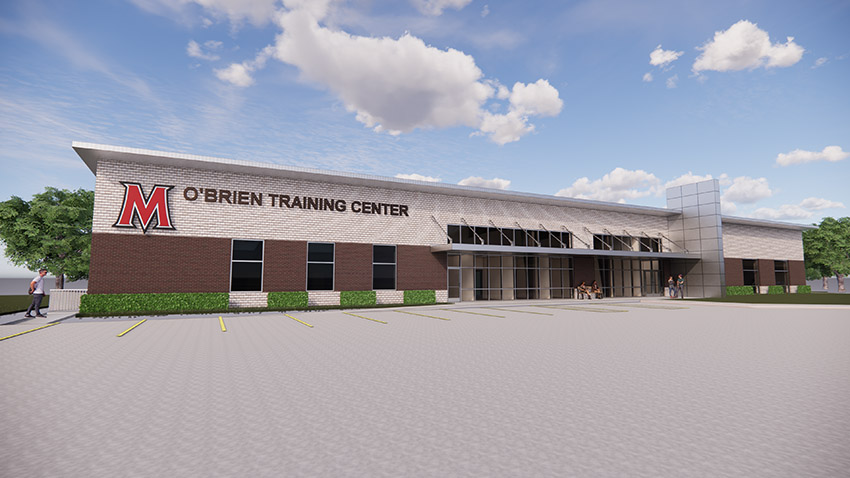 Mid-America Christian University Athletic Director Marcus Moeller started at the school coaching basketball, but when he moved into his position six years ago, he began seeing the needs for other sports.

There was no locker rooms for baseball, softball or soccer. Getting in a workout meant students had leave campus to use the YMCA Earlywine location.

“We spent a lot of money externally providing space for student athletes,” said Moeller. “It’s an arms race in college athletics facilities, which people might think is only at the higher divisions, but the same holds true in our division as well. To bring students on campus and there not be a locker room for them was pretty disappointing.”

But the university’s new $4.5 million O’Brien Training Center will fill that need. Designed by Bockus Payne Architecture firm with structural design provided by Wallace Engineering, the 18,600-square-foot center is being built by Lingo Construction Services, Inc. It’s expected to be ready for athletes in August 2021.

Bockus Payne Architect Jason Tyler and Principal David Payne designed the building. They reworked a previous design and were able to save the school money by using a pre-manufactured building, but added exterior brick and used a sloped roof to give the center a modern feel.

“This building is a little more contemporary than what they have on campus, but it will set a different tone for the athletic buildings,” said Tyler.

The interior features lockers rooms, weight rooms and fitness facilities, which can be used by all students. Tyler said the interior color scheme uses grey and pops of the school’s signature red, with the university logo on the floors.

“We’re very pleased that the school was able to get the funds raised,” said Payne. “The construction costs came in below target, so the whole team did a good job on figuring out how they could save money. Tyler did a fantastic job on the design and really keeping those costs in mind while meeting the school’s needs.”

The building is part of a capital campaign to expand MACU’s athletic facility offerings. The center is being built debt-free, but $1.6 million is currently being raised for an 8,500-square-foot addition to the existing Gaulke Activity Center.

If the new building attracts more student athletes, MACU will be able to not only give them a good education, but fulfill another one of its missions, which is to teach students about Jesus Christ, said Moeller. In addition, the university wants to be competitively excellent, he said.

“As we crafted this building, we thought how can we weave those three things into this facility,” said Moeller. “Each space is designed in a way that it helps hopefully achieve that higher level.”