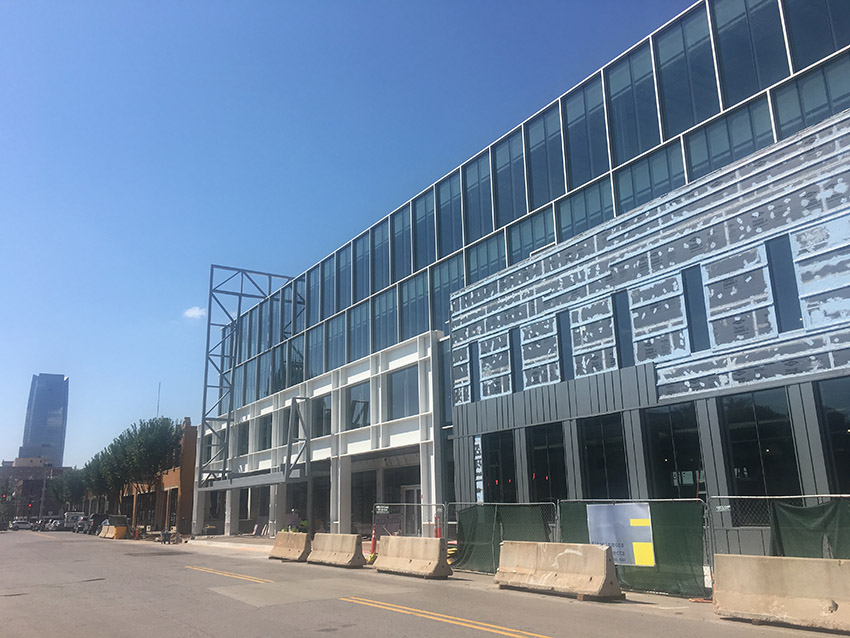 The 54,000-square-foot Monarch Building will be home to Lingo Construction Services, Inc. and Ackerman McQueen.

The Midtown Renaissance (MTR) work over the last 13 years has transformed the area between the Central Business District and historic neighborhoods into a place where people want to live, work and play.

While there is some office space, MTR’s Chris Fleming said a healthy neighborhood needs buildings that provide many uses, such as restaurants, retail, rental and for-sale housing, and more office space.

MRG had been working on an office building for a couple years. When Lingo Construction Services expressed interest in having a new home, Fleming had plans ready to go.

“We decided to go ahead and build a new office building in the hopes that the demand that we felt out there would fill it,” he said.

Construction is nearly finished at The Monarch Building, 1133 N. Robinson Ave. Lingo President Stan Lingo said his company is planning to move into its new first-floor space in October.

Fitzsimmons Architects designed the building and Lingo is managing construction.

“What’s cooler place than an office you built yourself?” said Fleming.

The 54,000-square-foot, four-story building will also be home to Ackerman McQueen, which has the three remaining floors. CEO Revan McQueen said his company plans to move by year’s end.

For Lingo, the move was a chance to stay in Midtown as well as work on a project that reflected more of what the company does now. Lingo’s current office, 123 NW Eighth St., had also increased in value as the neighborhood had filled in with tenants such as the Oklahoma City University School of Law and Vanessa House Beer Co.

“Just like the building we’re in now was a way to help us recruit talent and showcase what we do, The Monarch will be a place to show what we can do and how we’re different than other contractors,” Lingo said.

Being able to work in a tight, downtown space has helped the company continue to hang its banner in the city’s core. Lingo is managing construction at The Heartland Building and recently finished an addition at The Oklahoma City Community Foundation’s office.

“We’ve been working downtown for eight years,” said Lingo. “We’ve trained our staff to have very limited lay-down space for projects. We work on schedules with the sub-contractors and have put the Lean construction principles into place.”

Using those principles, everyone involved with the project meets at the beginning and sets a schedule for when they’ll need to be on the site. In downtown, this is crucial because there’s limited space, so not many crews can be there at the same time anyway. 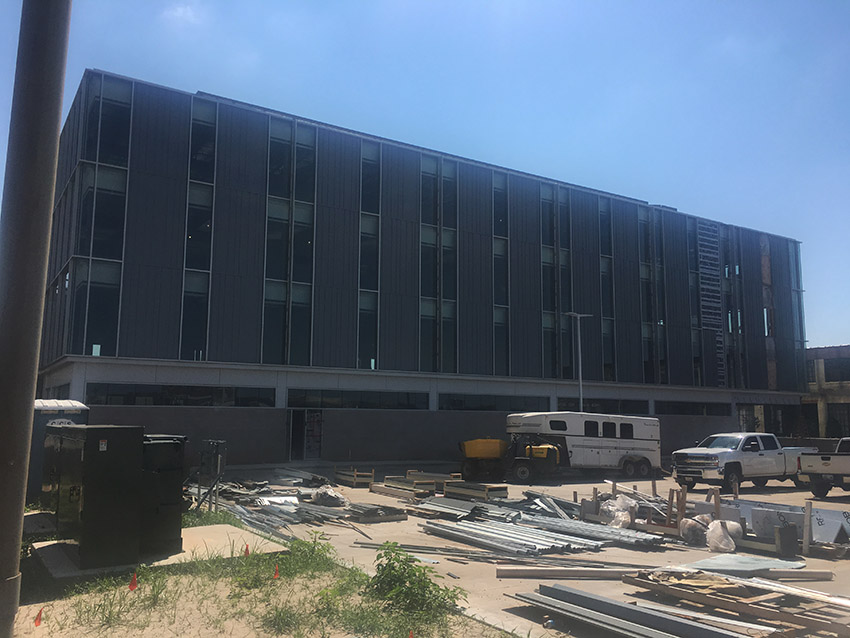 Lingo Construction's first-floor office will allow employees to come through a back door, so any muddy work boots won't leave tracks in the elevator.

Once the building is completed, Lingo’s staff will move into a space that’s 20% smaller than where they are now, but still surrounded by downtown energy. The 9,500-square-foot office was designed in-house so employees were able to layout where they wanted to be and who they should be near. Only the five conference rooms and bathrooms have doors, though there are ample spaces to take private phone calls.

“As we’ve constructed more and more modern offices, we’ve seen that our office is too spacious,” he said. “This new setup will allow for more community.”

Getting into the downtown energy and immersing the company’s creative employees into the community is why Ackerman McQueen is making the move from its office tower on Northwest Expressway to The Monarch. Ackerman has been at the Valliance Bank tower since 1984.

“We chose The Monarch over any other place simply because of the connection to the Midtown neighborhood and hopefully a connection to the Innovation District,” McQueen said. “Midtown is a really walkable area, and as extremely strong and talented creative group, we want to be more integrated into that blossoming area.”

Getting into three floors will be a much more efficient work area than where the company is housed now, he said. There are some employees separated by 19 floors.

“There’s nothing like a long elevator ride to break up the needed collaboration,” he said.

McQueen stressed that while from the outside, it may look like the company is simply moving downtown, this is about company culture most importantly, he said.

“This wasn’t a desire to just go to a large workplace somewhere,” he said. “It was the energy of this city that’s the driver of this decision.”

Besides the office, Ackerman is building a new production studio, which will be in a brown building off Broadway Circle, across from the floral warehouse. While Ackerman has offices in other cities, all video production will be done in this studio. This will give the company a chance to showcase the city and perhaps have clients or out-of-state employees spend more time here once they see what opportunities are available.

The new location also gives Ackerman another tool in its recruitment toolbox.

“Being close to the energy of the city and the creative inspiration that comes from being in the right neighborhood, that has recruitment factored into it,” McQueen said. “Location isn’t something we expand upon now, but with the new office, it will be.”

Fleming said getting Ackerman McQueen to move its employees to downtown – one of the city’s oldest companies – really speaks to the success he and his partners have had.

“Employees want a different work lifestyle while they’re at work,” Fleming said. “Midtown offers what we feel is the best of all worlds. It’s a great location with great amenities in the neighborhood that employees can do without getting in their cars and driving around town.”

When The Monarch Building is finished, there is still office space available at the former Mercedes-Benz dealership, the future home of HoganTaylor accounting firm. Once that building is leased, then MTR will consider more office development, Fleming said.

McQueen said his company is looking forward to seeing what comes next in Midtown and wants to be there to share the story.

“We’re excited about Midtown is today, but we’re really excited about what it can be in 5-10 years,” McQueen said. “We want to make sure the story telling that comes out of our companies is felt at the neighborhood level, where the culture is being fed.”