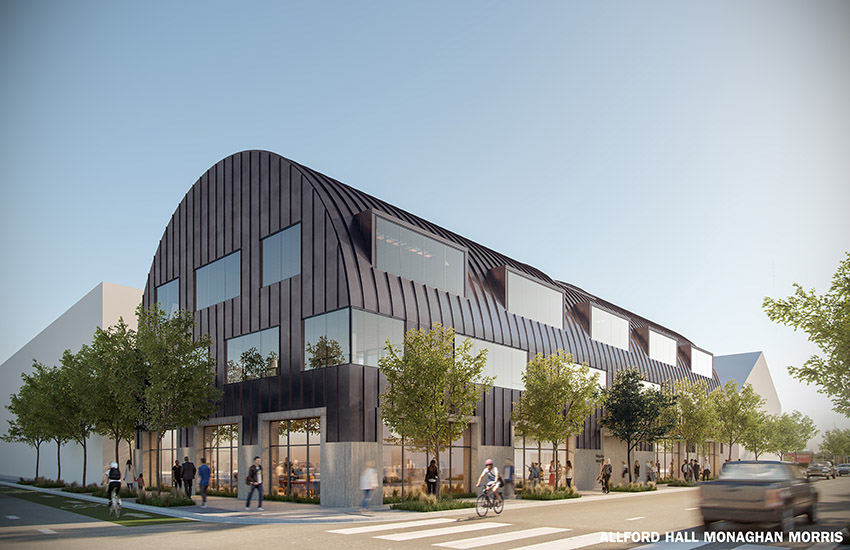 The new mixed-use building in the Wheeler District will give people a place to work and play.

Construction activity at the Wheeler District will not be slowing down anytime soon with work beginning in 2020 on a mixed-use building.

Designed by Allford Hall Monaghan Morris, the 27,000-square-foot three-story building will have a 9,000-squrae-foot retail space on the first floor and office space on the second and third floor, each also measuring 9,000 square feet. Wallace Engineering provided structural engineering services and the construction will be managed by Lingo Construction Services, Inc.

“From the beginning, Wheeler has always been about creating a whole neighborhood that provides an opportunity for a walkable, urban lifestyle,” said Humphreys. “While housing is a key part of that, ultimately is requires all the components that make urban life work, which includes shops, restaurants and great places to work.”

AHMM Principal Wade Scaramucci said the team tried to create something that fits connects the developing district to its past life as an airport. The early design images show a three-story flat roofed building, then it involved into a peaked roof. But the rounded roof seemed to be a better fit, he said.

He said the 1950s-era buildings often used barrel-like trusses. The design can be seen in grain bins as well.

“For a number of reasons, the rounded roof felt more authentic to Oklahoma City,” he said.

Humphreys said he’s already seen some interest from businesses interesting in leasing the office space, with an anchor tenant on the top floor and the second floor being divided.

He said he knows he’s not the only developer offering office space in the city, but he thinks the district has something different.

“We’ve seen interest in terms of people who are already living in Wheeler or have been paying attention to it,” he said. “This is an opportunity for them to plug in to what we’re doing and have a place they might work as well. We can provide a unique offering that fits them. We’re hearing from people that are excited to be close to downtown, be in an urban setting and be south of the river.”

The new mixed-use building is one of several exciting construction projects underway in the district. More than 40 homes are under construction or occupied, making phase one more than 50% complete. When the entire district is finished in 20 years, there will be more than 600 homes in the area.

In 2020, the district will see its first businesses opening. The Big Friendly Brewery and Taproom as well as an all-day restaurant are slated to open. The restaurant in the historic terminal building is being operated by the Packard’s team.