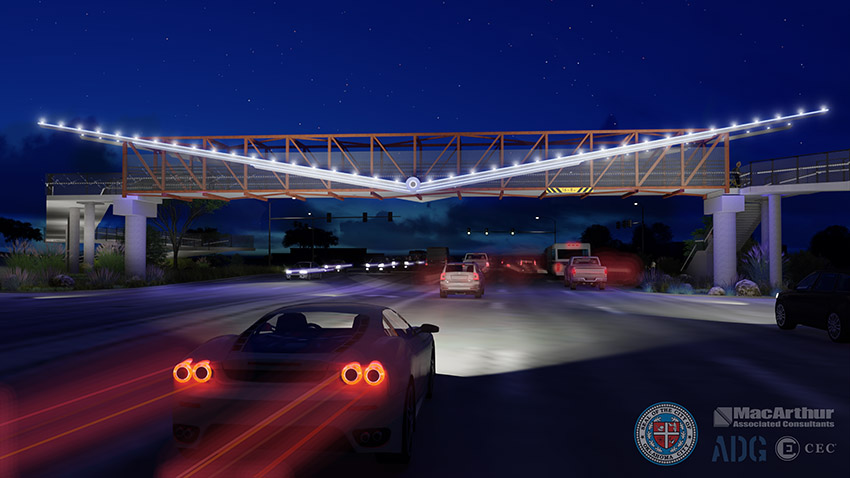 Construction will start in early 2021 on a new icon for northwest Oklahoma City.

A pedestrian bridge is being built across Northwest Expressway and will create a safe connection between the Lake Hefner Trail and the Hefner-Overholser Trail.

The $3.25 million project has been on the city’s radar since the early 2000s. Some of the money is coming from the 2007 bond package and additional funds were approved in the 2017 bond vote, said Shannon Cox, public information director for Oklahoma City Public Works. 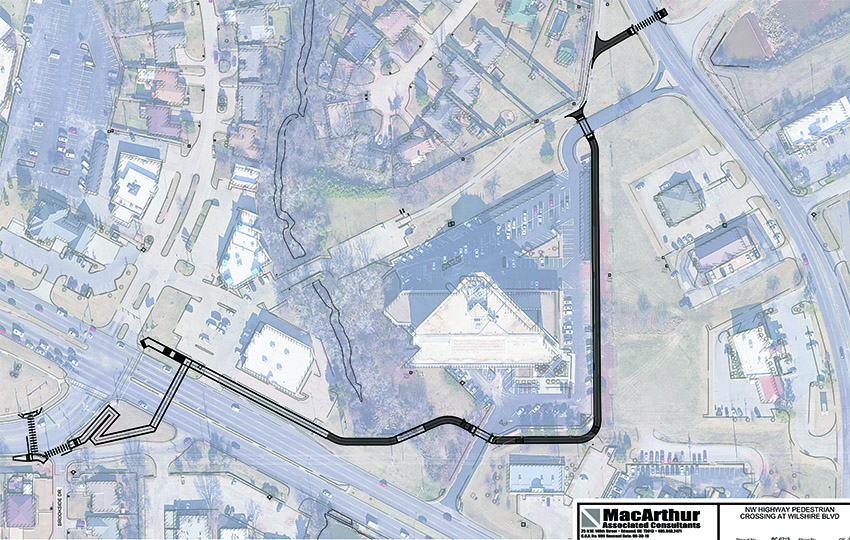 The black path on the map above is the new trail connection from Lake Hefner to Wilshire Boulevard.

With the placement of the bridge, a new one-quarter mile trail connection is being built to help safely guide runners, cyclists and other pedestrians from Hefner-Overholser Trail on N. MacArthur Boulevard around the commercial area near Northwest Expressway.

Currently, the Hefner-Overholser trail ends in a private parking lot along MacArthur Boulevard, though trail users often go through a private parking lot to get to a city street, then they cross Northwest Expressway. The city has marked off bicycle lanes on Wilshire Road, which can be used to get to the Hefner-Overholser Trail. The route from Hefner to Overholser is popular with cyclists, so that user group was highly considered when designing the bridge.

With 45,000 vehicles a day traveling that area of Northwest Expressway, the existing crossing only has 30 seconds of pedestrian crossing time and only seven seconds of safe walk time, said Russell Kent, group leader for military and site design at MacArthur Associated Consultants.

“That’s not a safe crossing, but it will be once this project is finished,” Kent said.

MacArthur is working with ADG, Lee Engineering and CEC Corporation on the project, which includes the bridge, the trail addition and the ramps leading up to the bridge. MacArthur is using a prefabricated bridge, an element that brings many benefits to the project.

Besides traffic, the project had many other challenges, including proximity to city limits, utilities and a lack of available open land. Kent and his team had to figure out where they could lay the ramps on the south side to stay within Oklahoma City limits, without crossing into Warr Acres. There was also property to buy for the trail connection and some water mains that will be relocated.

MacArthur Structural Engineer Greg Delano designed the 12-foot-wide ramps that lead up to the bridge. The ramps will be built on site.

While MacArthur engineered the bridge to be safe, ADG’s Scott Dedmon ensured it’s more than a slab of concrete crossing Northwest Expressway. He made it an icon. Dedmon had three ideas of how to make the bridge aesthetically pleasing and residents at a community meeting chose the automobile-inspired design.

ADG’s Brian Hines said he and Mike Patel are excited to be involved in the project.

“This will become an iconic gateway for Northwest Expressway,” said Hines.

ADG’s chevron design is being attached to the bridge with the structural engineering guidance of CEC’s Chris Snider. But that’s not CEC’s only involvement. Electrical engineer Andrew Pritchard designed the lighting system that will allow the bridge to be lit in different colors, similar to the Scissortail Bridge across Interstate 40.

Pritchard said he’s looking forward to driving under the bridge and being able to tell his kids that he was involved in the project. He said they’re not that excited about all his work, though he gained some cool points with them when they found out he was involved with Scissortail Park.

“It’s not every day I get a ‘Wow’ out of my kids and I think this project has a lot of wow factor,” he said.

Northwest Oklahoma City residents could see work start on the entire project early next year and it should be open by the end of 2021, though there are many parts to the entire project. The trail addition includes installing a new pre-fabricated bridge over a creek and the Wilshire/NW Expressway intersection will get new signal lights.