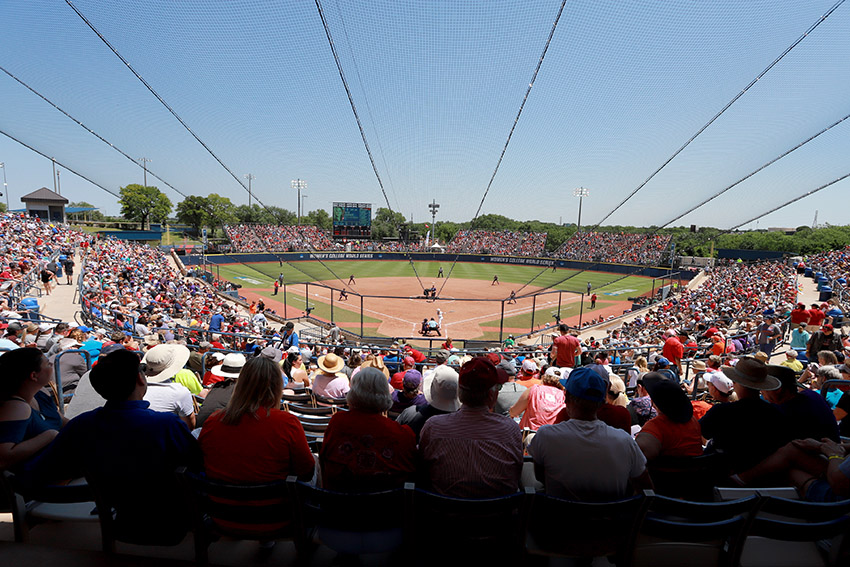 When the first pitch is thrown on May 30 at this year’s NCAA Women’s College World Series it will be the 29th time the tournament has been held in Oklahoma City. The week-long event brings 70,000 spectators to OKC each year. As part of an agreement to keep the series at the USA Softball Hall of Fame Complex, the venue had to undergo millions of dollars in renovations. A $27.5 million bond package passed in 2017 is funding those improvements, and it’s money well-spent.

“Teams and fans flood local hotels, restaurants and shops during each tournament and their direct economic impact is more than $15 million,” said Mike Carrier, president of the Oklahoma City Convention & Visitors Bureau.

Every game is broadcast on ESPN and, as a result, Oklahoma City is mentioned multiple times during each game to a national audience, in addition to broadcasting shots of the Adventure District, the downtown skyline, the city’s many amenities and other images indicative of OKC’s renaissance.

According to Carrier, “You can’t buy that kind of positive exposure.”

The city of Oklahoma City worked out a long-term agreement with the NCAA Women’s College World Series, lasting through 2035.

In exchange for the long-term agreement, the NCAA wanted improvements to the stadium to better accommodate the athletes, media and improve the fan experience.

Additional bathrooms, a new press box and complete demolition of the existing facade are also part of the effort and will be completed just in time for this year’s event.

The NCAA demanded such improvements if Oklahoma City wanted to keep the WCWS long term, but really, such things were desperately needed for an event as big as this.

The changes fans will notice are the most significant outward alterations to USA Softball Hall of Fame Stadium thus far.

The old pressbox was bulldozed to make way for a new structure. Now stands a two-story pressbox. The second level is dedicated almost solely to ESPN with a broadcast booth and an area where on-air talent can demonstrate skills in front of a green screen. Media will also have expanded areas under the stadium, including an interview room and work room.

While the pressbox is bigger, one part of the old structure is noticeably absent. The overhang that used to shade hundreds of seats behind home plate is gone, though more areas of the concourse will be shaded for fans seeking a respite from the sun.

Another big change associated with the new pressbox is the stadium entrance. There are new gates, box offices and landscaping.

Most stadium improvements in this round of renovations focus on the media, but one enhancement fans will notice is an additional big screen. A 17-by-10-foot screen is being added above the seating area on the first-base side, giving fans in the outfield bleachers a view of replays and videos.

Only one phase of the current renovations remains – but it will be the biggest of them all.

An upper deck will be built before the 2020 Women’s College World Series, adding 4,000 permanent seats and expanding the capacity to 9,000. With the temporary outfield bleachers brought in for the WCWS, seating for that event will exceed 12,000.

Fans who attend the WCWS this year can get an idea of where the new deck will be. Some of the steel beams that will hold the decks have already been placed near the new pressbox. The beams closer to the field show the slope of the front section of the upper deck, which will be separated from a back section by a walkway. The beams farther back represent the highest point of the new construction.

Once the upper deck is added, it will keep the WCWS in Oklahoma City for years to come.

This article was written for the June 2019 Point.