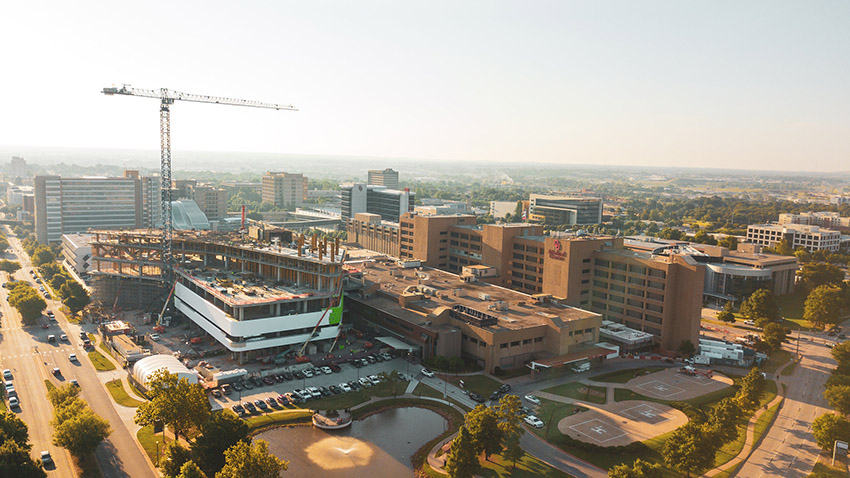 Travelers heading south on Interstate 235 are likely starting to notice another building in their eye sight as they look over at the Oklahoma State Capitol.

The large building will have a positive impact on the economy. Besides the construction jobs helping to make the dream a reality, OU Medicine President and CEO Chuck Spicer said OU Medicine has added 600 employees in the last couple years. After 2020 starts, another 100 full-time staff members will make it on the payroll. Spicer said they’re not all doctors, but they do make above the area’s average salary. He said these new jobs in the city will have a positive economic impact on the community with people buying homes, spending money at local stores, or taking advantage of the many entertainment options such as live music or professional sports.

The building was designed by Perkins + Will, which is the same firm that developed the land use plan for the Innovation District. P+W used Oklahoma’s topography as its inspiration, so the building was designed in the shape of a butte. P+W worked with Oklahoma City-based ZFI Engineering on the structural engineering. The Dallas office of the Turner Construction Co. is overseeing the build.

This is the first ground-up hospital construction project for OU Medical Center since 1975, though more recently there have been building renovations and academic, clinic and outpatient construction projects. The new nine-floor tower (eight floors above ground) will have 144 patient beds and 32 operating rooms.

Construction is moving quickly. Concrete will be poured soon on the eighth floor with a topping-out ceremony scheduled being scheduled for November. People can watch the daily progress via a live webcam.

Spicer said the patient tower was first talked about in 2009.

“This is a once-in-a-lifetime type project,” he said.

The space was projected to be needed as the Stephenson Cancer Center gained notoriety. In 2018, Stephenson was named as the only National Cancer Institute-designated cancer center in Oklahoma.

OU Medicine is also the only Level 1 Trauma Center in the state.

“If we run out of beds, we have to send people to Dallas,” said Spicer. “So the growth we have is to keep more people here. It’s not to take away business from other hospitals in the city.”

The tower’s rooms will be used by Stephenson Cancer Center patients, patients requiring complex surgeries, trauma-related services and more. The new operating rooms are larger than any other operating rooms on the campus, Spicer said. The rooms will have the latest in medical robotics equipment.

The patient rooms are bigger than what is currently on campus as well, he said. The new rooms will have space for family and visitors as well as doctors and nurses. The visitor area will be closer to the windows, where people can see the skyline or the capitol.

“The family space is critical,” Spicer said. “We have people coming here during some of the worst and most traumatic moments of their lives. We had families that are here help us tweak the design so it is truly accommodating to their needs.” 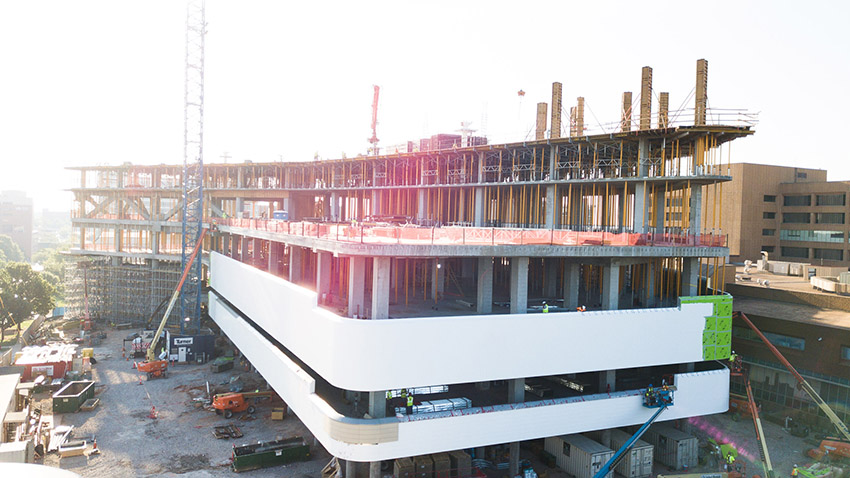 When completed, the building will be the largest hospital campus building in the state. With such a large space and so many systems to connect, the structural components are expansive.