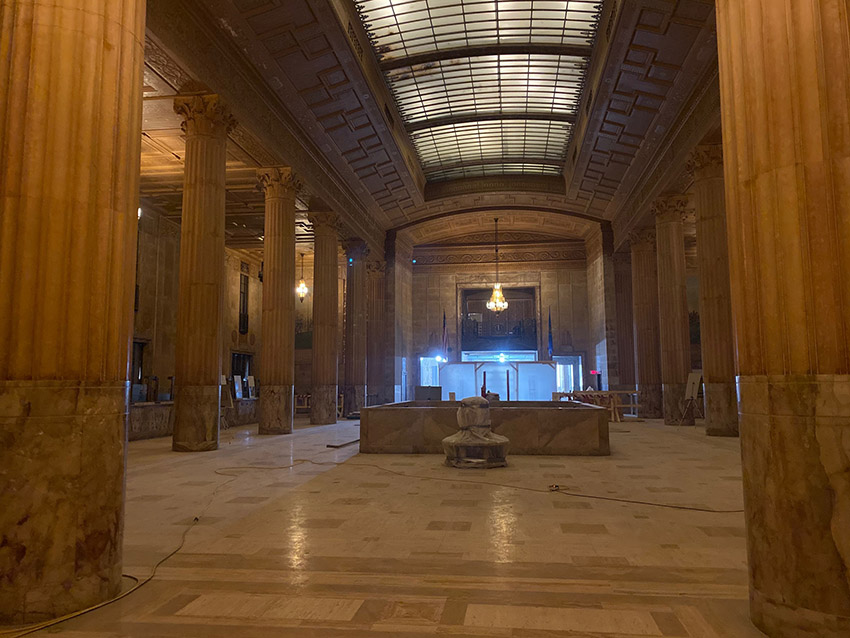 When the renovation is complete, The Grand Hall will look as shiny as it did in the 1930s.

It may seem like there’s an endless trail of junk being removed from the First National Center, but inside the building, progress is evident.

To date, there’s been nearly 43 million pounds of material removed from the three-building complex. Brooks said He expects it to reach 45 million pounds – if not more – by the time he’s done. Piles of rubble sit in the east side of the building, on the other side of the wall from The Great Hall.

Brooks and his co-developer Charlie Nichols bought the First National Center in January 2017 for $23 million. By 2016 and through their due diligence process, they learned how difficult a task it would be to bring the buildings back to their glory, but they were not deterred.

The latest timeline has the project being finished by late 2021.

Ever since the sale closed, Brooks has been working on removing asbestos from the building. He worked with Rose State College to set up a class where people could be trained in the work, then he’d hire them. In 2017, the FNC was the one of the largest asbestos-removal projects in the country.

The building will also have all new infrastructure. In the basement, the existing systems are being removed literally piece by piece and a new system will be installed.

Soon, the first new construction will happen on the site. With part of the 1970s-era eastern building removed, the concrete trucks will start arriving to pour the subbasement for the parking garage. The garage will have a glass front and metal front, facing Broadway. It will tie into the existing nearby architecture, such as BancFirst’s new tower and the Continental building.

When construction is completed, the buildings which once held state offices will be home to multiple places to get a cocktail, the city’s first Ruth’s Chris Steak House, a 146-room Marriott Autograph Hotel on the lower floors and 193 luxury apartments starting on the ninth floor. Coury Hospitality will manage the hotel property. 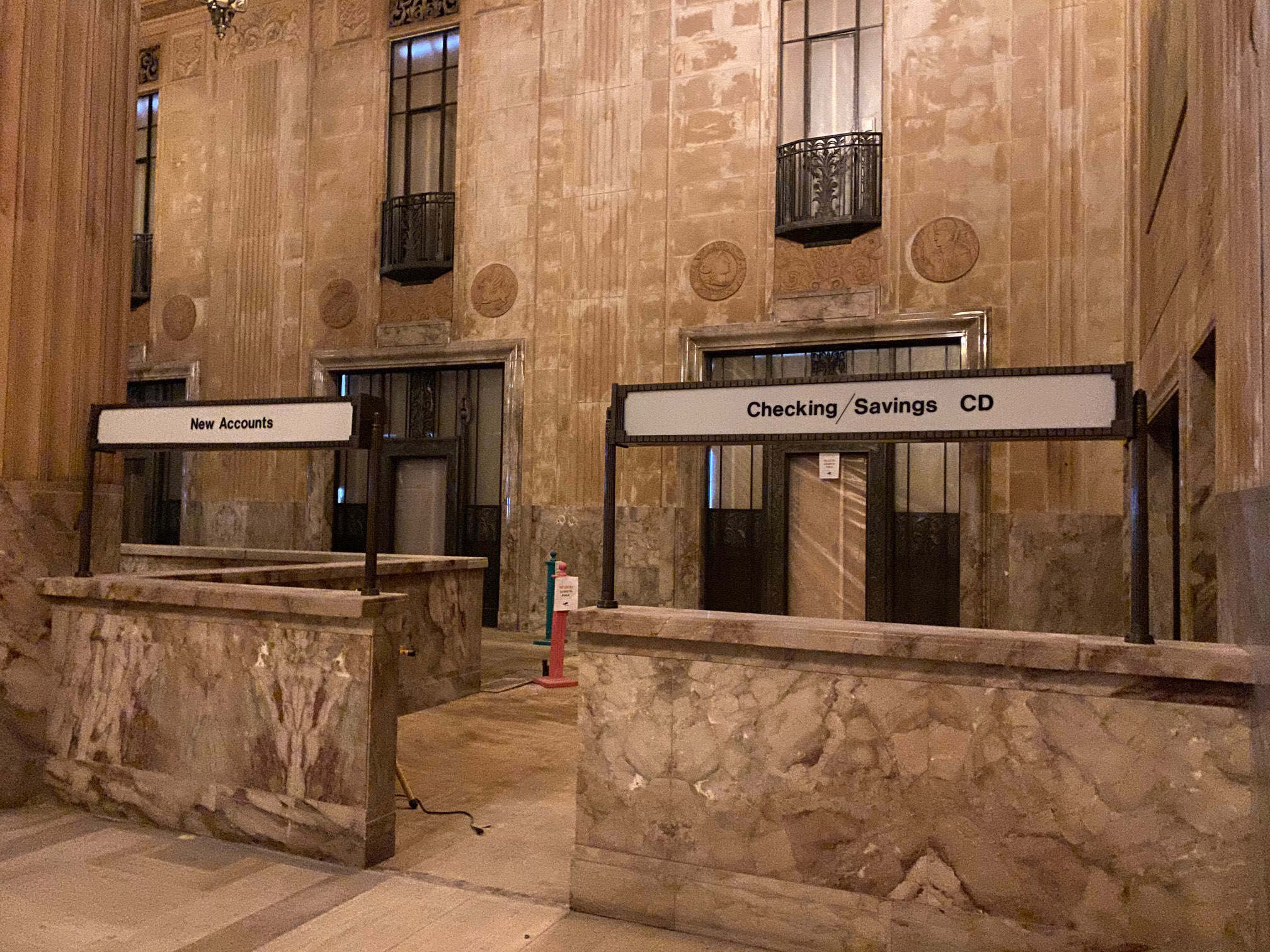 The existing teller windows and signs will remain in The Grand Hall.

There will be one bar and one restaurant in The Grand Hall. In the center, people can dine at Tellers, while in the northwest corner, visitors can enjoy a cocktail from Minted. In the lower level, Ruth’s Chris will open on the northern side. There’s a speakeasy planned for the basement, which was previously home to the vault.

Brooks said he and his design team have taken great care to create spaces that respect the reverence of The Great Hall, but are also approachable. His early take on what to do with the space turned it into something more resembling a library and he knew that wouldn’t work.

“It needs to be fun,” he said. “If someone is in flip-flops and a t-shirt, they can still come into The Great Hall and get a drink.”

The Great Hall will be restored to its 1930s glory, Brooks said, with people coming in to hand-paint the ornate designs on the wall and ceiling. The room has been sealed with its own heating and air condition system so it stays in good shape.

Another team will clear years of tobacco smoke, dust and other grime from the metal in the hall, such as the teller booths. A section of a door frame has already been cleaned and there’s a noticeable difference. The restoration will take about a year, Brooks said.

Oklahoma City Convention and Visitors Bureau President Mike Carrier said the new hotel is an attractive continuation of the city’s hotel growth. Before 2000, there were two hotels in downtown. Now, there are 24 hotels in downtown, with three more hotels – not counting FNC – under construction.

“As the Central Business District has continued to grow in both size and reputation, the need for more hotel rooms of a higher caliber has resulted in this monumental increase in new products,” he said. “The hotel at First National will be another great asset for corporate and leisure travelers, as well as those coming for conventions.”

While some debris has been removed and put into trash dumpsters, Brooks and his team are also saving other items. People who saw the basement before construction should not fret about what’s happened with demolition. The original wooden vault doors that framed the small, private rooms (think dressing rooms) have all been removed but are being stored for future use either in the building. The vault has been cleaned and put back in the building, but is protected by wood and plastic as work continues.

Also in the basement, the building will offer a private entrance to the parking garage with a limo turnaround; so if needed, someone can be dropped off and taken into the hotel without going onto the street.

On the eastern side of The Grand Hall, there’s a large conference rooms and other meeting spaces. 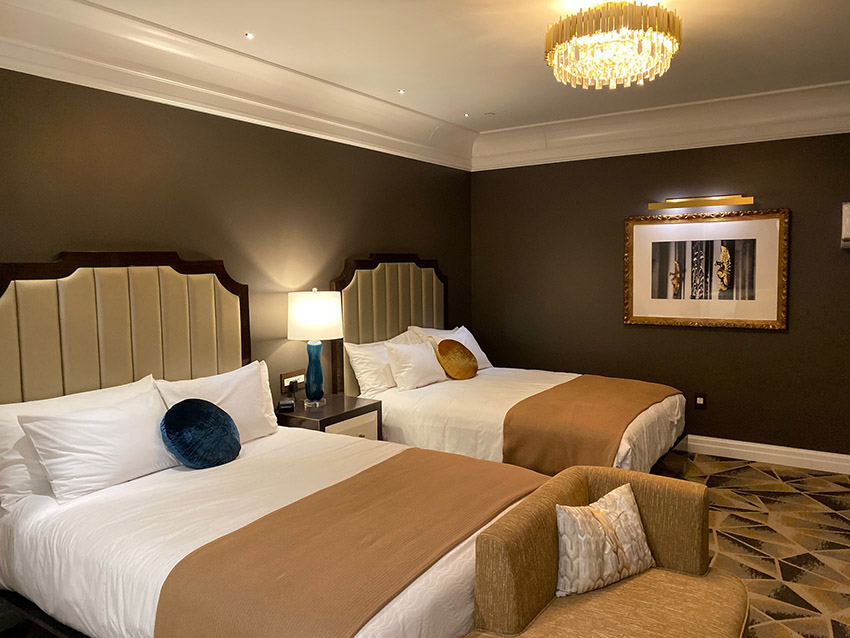 The room's interiors were specifically designed for the hotel in Oklahoma City.

Above The Grand Hall, cleared floors are being prepared for hotel room construction. There are two model rooms set up, showing the class and elegance that will be found in the hotel. Each piece in the room is made specifically for the hotel.

Throughout the building, the rooms and apartments each have an added storm window, which allows the building’s historic windows to be retained, but the extra window helps eliminate sound.

“Living downtown is different than the suburbs,” he said. “This is New York-style living in the middle of downtown Oklahoma City.”

Brooks said he’s received more interest than he expected in the apartments. Buildout, including installing cabinetry, has started on the units.

“These will be far better than the best product I’ve ever done,” he said.