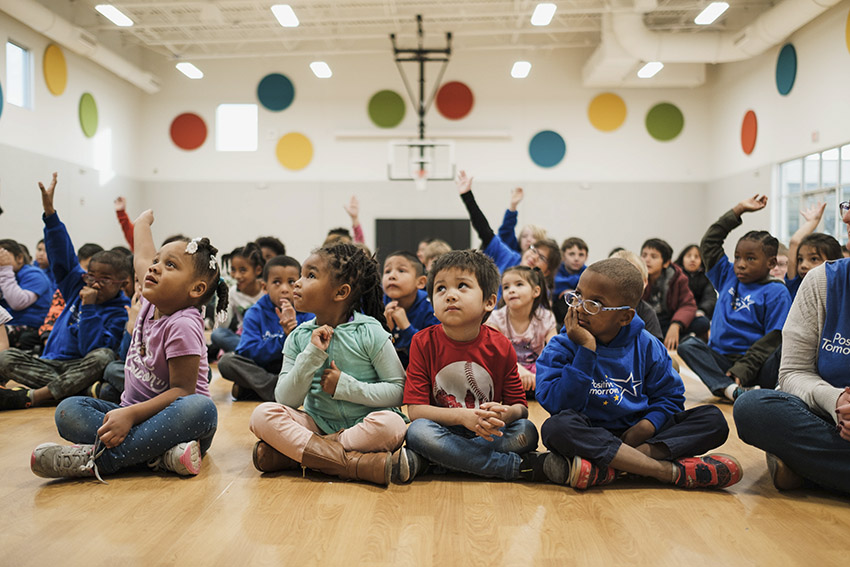 The Positive Tomorrows students sit for their first morning assembly in their new gym.

The new Positive Tomorrows building is more than a private school for children experiencing homelessness. It’s a social services agency, offering a range of family support services to parents of students.

With the unique needs and activities served by the building, Gary Armbruster and his team at MA+ Architecture, which specializes in designing schools, looked at this project differently than just another place to learn.

“The clients were completely different than most of our clients,” he said. “The first thing I said when we got on board was can I speak with the kids. In every school, the kids are the most important piece. But in this school in particular, it was crucial that they were the focus.” 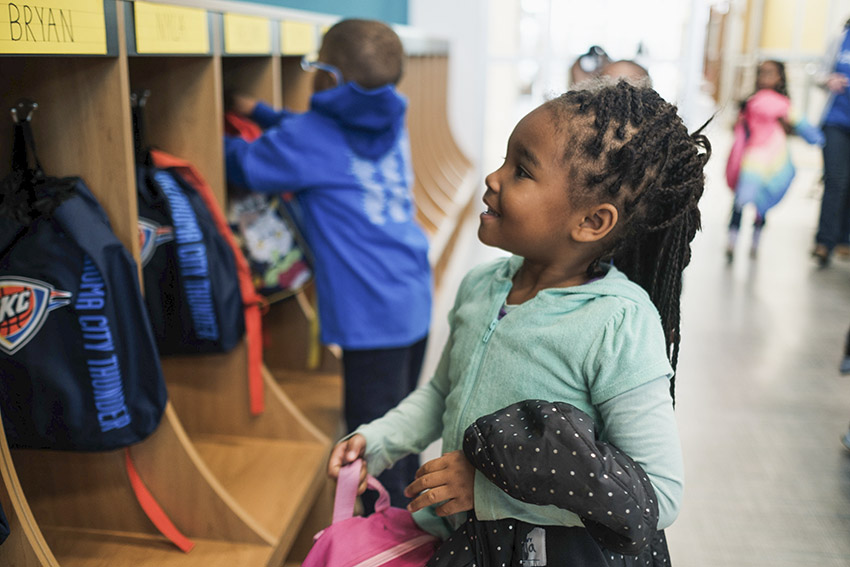 A student hangs up her backpack in her cubby at the new school.

Part of the building’s design is like a typical school, with classrooms, a cafeteria, a gym, a library and a playground. But even those amenities were a big step up for Positive Tomorrows; which didn’t have a gym at its former school, so rainy or cold days meant no playtime.

The nonprofit organization also offers services to parents, such as free clothing, hygiene items or other needs. There are social workers on staff to connect families with other resources for support or even find a job.

“There were a lot of the things we put into the school that were different than most schools, such as a clothing closet, a donation room and a kitchen lab,” Armbruster said.

All of the assistance and services needed a larger space. The teachers and staff needed more than one bathroom.

The new building has plenty of room for everyone.

“The clients we serve deserve what every kid deserves,” said Susan Agel, president of Positive Tomorrows. “Our teachers are skilled, and they need the equipment and space to use those skills.”

The new building has a Kitchen Lab, an idea that came from the firm’s Pinterest board. In the space, families can learn to cook and then enjoy a meal together. There’s also a washer and dryer in the space so laundry can be done at the same time.

“That’s one of my favorite rooms in the whole building, not just because of the design, but because of what will happen there in the future,” Armbruster said.

Agel said the building will allow the organization to serve students in a better and more functional way. And, eventually, there will be more students in the building as the agency expands its school to offering older grades.

For now, Positive Tomorrows is settling into its new space, with the students having their first day of classes on Dec. 2. They were shown a few spaces in November when the Oklahoma City Thunder brought the whole team for an early Thanksgiving celebration.

The students who will enter the school are likely not the same kiddos – or "friends" as the teachers call them – who worked with MA+ on planning the building. Positive Tomorrows has an average turnover rate of six months, so the students at the beginning of the project have likely already moved on to what is hopefully a better situation. That was a harsh reality that Armbruster said he came to realize while working on the project. He had bonded with a student named Kenneth, who drew a detailed design of his future school. 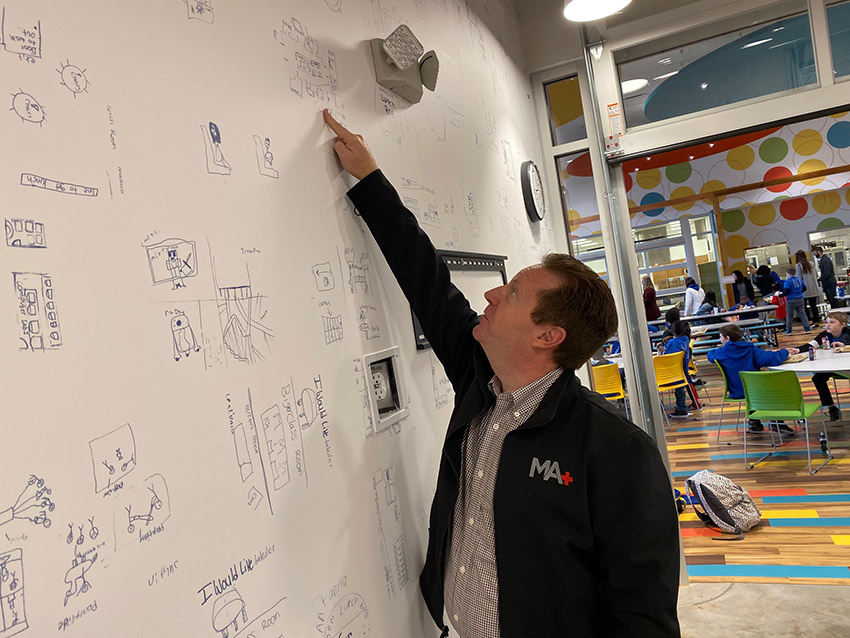 Architect Gary Armbruster points to Kenneth's drawing for the school. The wallpaper hangs in the Makers Studio.

Since it took five years to go from drawings to reality, Kenneth isn’t at the school anymore. But his ideas for the school and drawings from other kids now make up the wallpaper in the Makers Studio.

Armbruster said the project also taught him about his community. He always thought homeless people were single adults, holding signs on the street corners.

“I truly never thought of the children involved in this,” he said. “But as I’ve worked with Susan and the Positive Tomorrows team, I’ve learned about this population of kids and their families.”

When designing their school, the need for a homey environment came up a lot, so MA’s interior design team, led by Kalie Sheppard, brought in wood accents and inviting furniture to the space. The students and teachers also requested color, so from floor to ceiling, multiple colors are always in eyesight. The halls are wide with natural light beaming at the end of every hallway.

Compared to the white brick walls and grey flooring of the former school, the new space offers an uplifting and inviting environment. 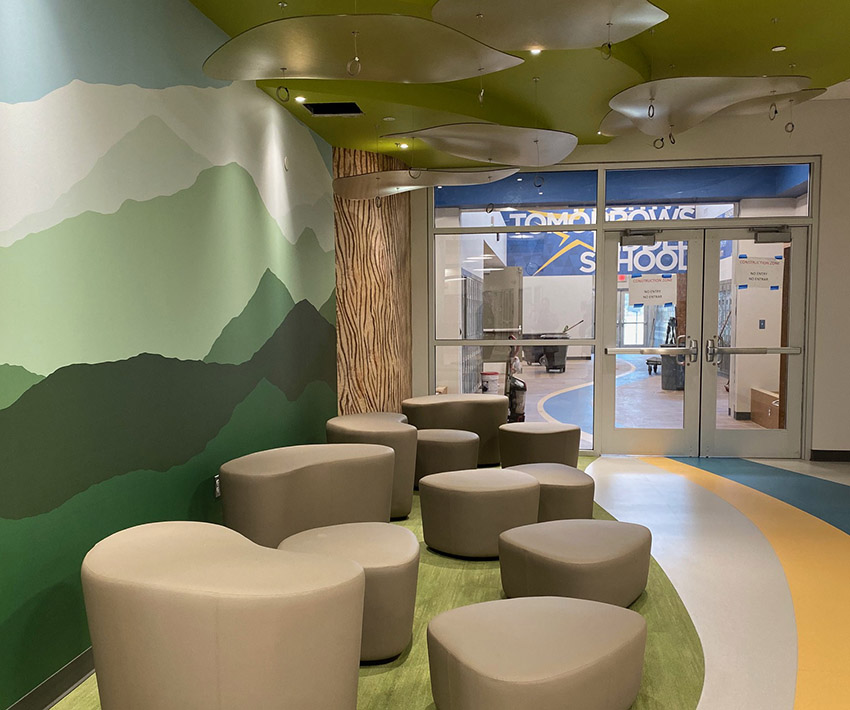 The students asked for a tree house at their school. This inside version of it will serve as a collaboration area.

“This building is a one-of-a-kind building, not just in the U.S., but in the whole world,” Agel said. “There’s no other building that we’re aware of that specifically takes the needs of homeless children into account and provides the case management and other services we have for families.”

The new building cost approximately $15 million to complete, with $10.5 coming from private donations and the remaining $4.5 coming from a new markets tax credit program, which seeks to make Oklahoma communities stronger through development and investment.

“This new building is going to allow us to do so much more than we’ve been able to do before,” Agel said. “But there is still much work to be done, and we need the continued support from our community to help more children and families into the future.”

GE Johnson Construction Company’s Oklahoma City office and Cooper Project Advisors were proud to be involved with the project as well.

GE Johnson OKC General Manager Randy Nance said working with the organization has been incredible. The company regularly volunteers with the agency.

“Their leadership is humble and mission focused and that attitude filters all the way down through their staff,” Nance said. “It’s hard for me to imagine a more important project for GE Johnson to be a part of. I get excited thinking about the lives that are going to be changed by Positive Tomorrows in this building. These are the types of projects that I got into this industry to build.”

He commended the entire development team on the work.

“MA+ Architecture and Cooper Project Advisors were exemplary partners on this project.  Construction projects always present challenges, but this team worked together to deliver a wonderful experience,” he said.