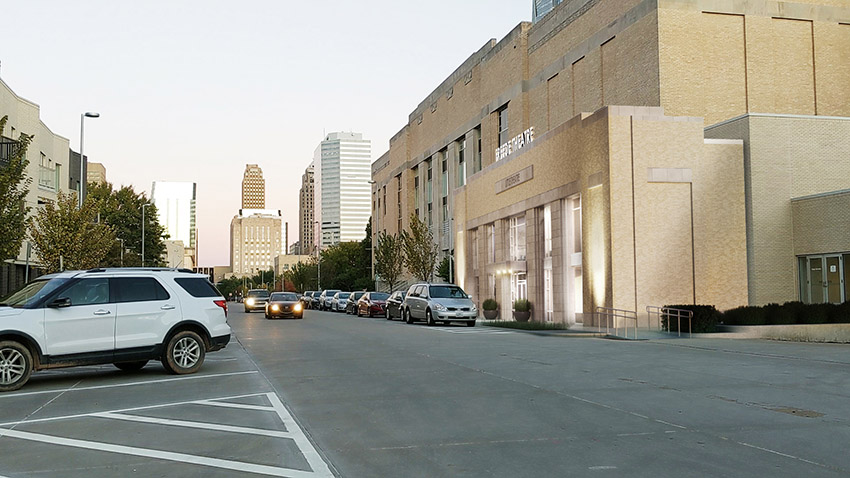 The addition will sit on the north side of the Civic Center Music Hall. Rendering provided by FSB.

A longtime dream of the late Jose Freede is finally coming true.

The Civic Center Music Hall will soon undergo another round of renovations and will get a new entrance and lobby to the Freede Little Theatre.

“It’s really unfortunate that we just lost Jose Freede [the theatre’s namesake]. We were really hoping to not only show her the plans, but she’d get to see it finished,” said Elizabeth Gray, executive director of the Civic Center Foundation. “This was something she hoped to see decades ago.” 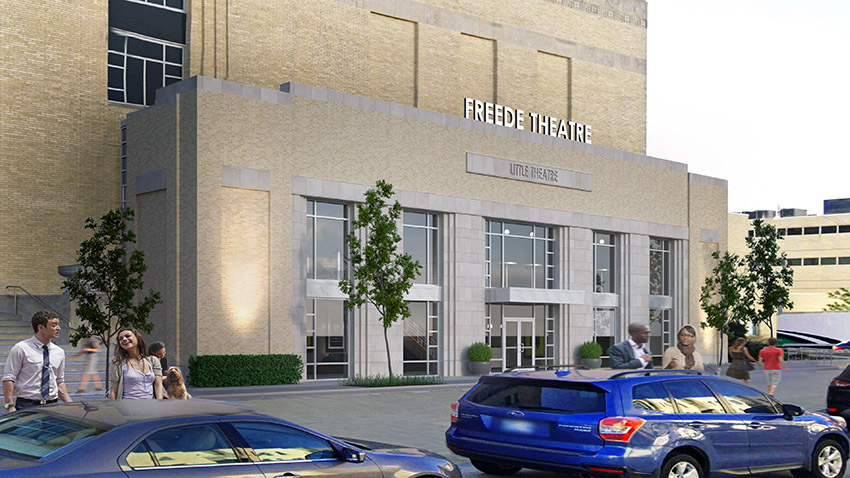 A new entrance and lobby for the Freede Little Theatre has been on the City of Oklahoma’s City’s radar since the first Metropolitan Area Projects initiative, when the Civic Center underwent millions of dollars in upgrades.

But as the budget evolved for the renovations, the Freede addition was left for another time. Freede is one of several performance areas in the building, including the largest venue, the Thelma Gaylord Performing Arts Center, as well as CitySpace Theatre and the Meinders Hall of Mirrors.

In 2013, the Civic Center Foundation and the building’s owner, the City of Oklahoma City, hired a national firm to study the entire facility and see how it could best be used. The study identified about $40 million in improvements that could be done in the building.

“We have lots of hidden pockets that are underutilized,” said Gray. “The study helped us find ways to increase utilization.”

One finding that came out of that study was how to better utilize the Freede, which needed updates to be more aesthetically pleasing as well as compliant with requirements in the Americans with Disabilities Act.

“Theaters of all sizes are important to a community,” she said. “It’s not just about the national Broadway tours. It’s about all the local musicians just trying to make a name for themselves or the students performing in a dance recital. That first time on stage can be life-changing and we want to make sure Oklahoma City has a top-notch place for those experiences.”

The $9 million budget for the addition, as well as the updates in the rest of the building, was approved in the 2017 general obligation bond package.

The Thelma Gaylord lobby area was also seen as underutilized, leading to a crowded area around the performance area, said John Semtner, principal with FSB Architects and Engineers.

Construction is expected to start in early 2021. While it’s forecasted to be 24 months of work, construction will be done in phases around the Civic Center’s events.

This is FSB’s fourth time to be involved with work at the Civic Center. The firm was the program manager for the original MAPS.

In the Thelma Gaylord lobby, the renovation plans call to remove the ticket booth, the glass walls and the bar, creating a more open space. The stairs near the theater, donned in red, are being removed as well to create more space.

A new central bar, serving spirits and coffee, is being built closer to the theater’s exterior wall, though two other bars are being added to the north and south side on the first floor. The north bar will be housed in a glassed-off area for VIPs.

The building’s main entrance will also have a new security system, first installed at Frontier City this summer. Evolv Express can screen 3,000 people an hour for weapons, helping to keep the line moving and allowing people to get to their seats in time. 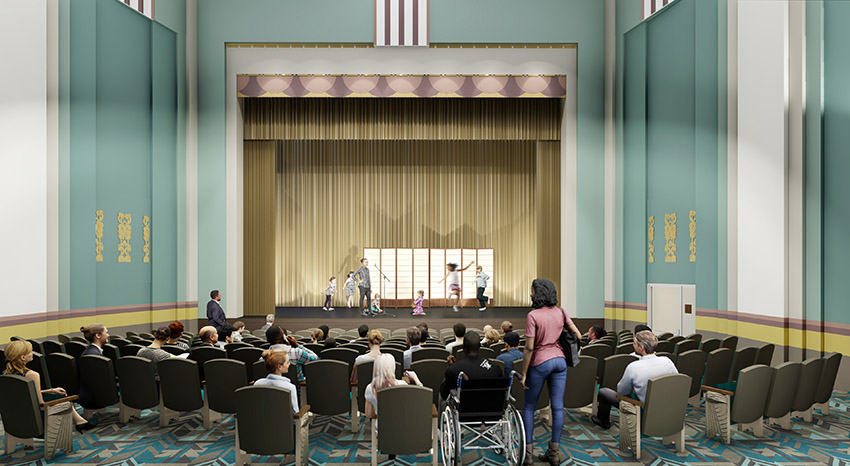 At the Freede, theater goers can expect a much higher-caliber experience in the venue once the updates and 4,500-square-foot addition is finished. The addition on the Civic Center’s north side sits out about 20 feet from the existing building and is about 100 feet in long, said David Ketch, architecture director at FSB. The firm worked with Schuler Shook on the updates to the theater’s interior, which included a full technology update. Larger seats are being installed as well and the historic lights will be redone.

The theater’s interior is being repainted with the historic blue seen in the Hall of Mirrors. Restrooms are being added to second floor.

The project has been a challenge for a couple reasons, said Semtner and Ketch. Adding nearly 5,000 square feet to a building constructed in the 1930s meant trying to find the architectural feel and materials. FSB asked for input from both the State and City’s Historic Preservation Staff and the City’s Downtown Design Review Committee, and who provided feedback including a request for the building to have a “hyphen.” 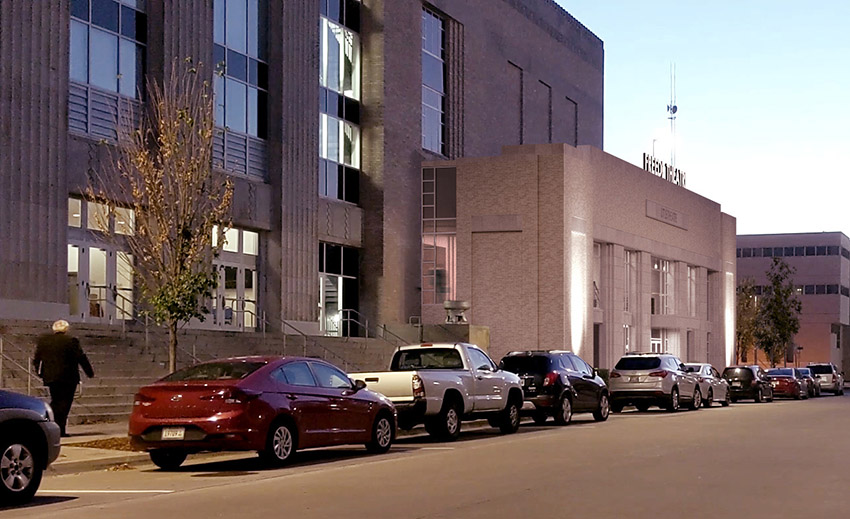 The addition features a hyphen, a design element that shows it's not original. Rendering provided by FSB.

“That’s a design element that shows it’s an addition to the historic façade,” Semtner said. “When people walk up from the east, they’ll notice some modern windows that mimic the building’s center window design designating that addition.”

But updating the main lobby has generated a lot of feedback for the architects. Regular theater goers are used to doing certain things when they go to the Civic Center and the lobby updates will change that flow.

“It will be a much more enjoyable experience when the renovation is complete,” said Semtner. “The main bar will have eight points of sale, compared to two now.”

The Freede is used by smaller performing arts groups, such as Oklahoma City Rep, OKC Theatre Company and Painted Sky Opera. But with the new addition, Gray said the foundation is hopeful that other organizations will see it as a place for their event as well since it will be more visible.

The Civic Center Foundation has been managing the center fulltime since 2018, though it has been easing into the role for the last few years. The foundation is doing as much as it can to increase revenue generation into the building, such as adding the VIP bar, making the Freede more accessible and bringing in top-quality Broadway shows.

The city’s continued investment in the center speaks highly of where art stands in Oklahoma City, Gray said.

“Art is an important aspect of our community,” she said. “A lot of people see it as a quality of life component, but it’s also an outlet for youth to get involved in something other than mischief. I think it reaches all aspects of the community other than just a fun night out.”