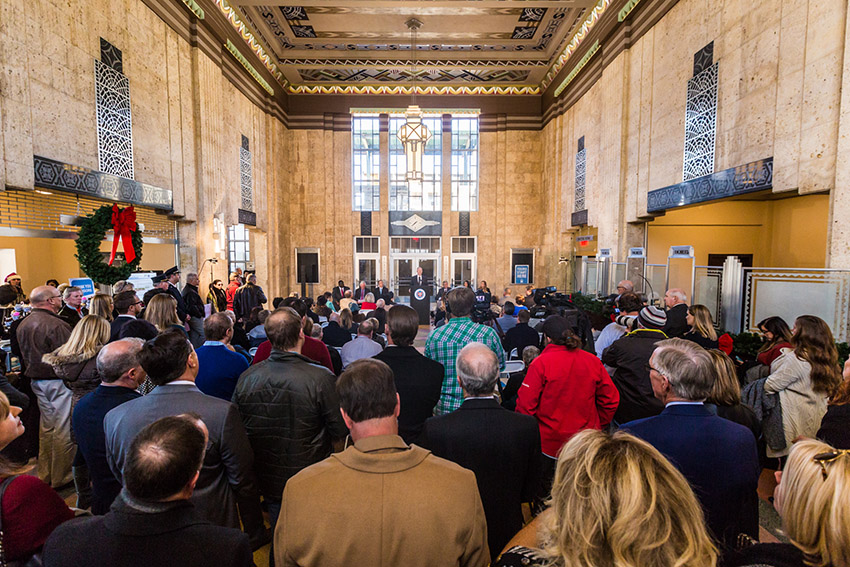 “This renovation project is the ultimate example of teamwork in Oklahoma – everyone pulling on the same rope,” said Mayor Cornett. “It took teamwork from the City, ACOG, the state and the federal government to get this project funded. Thanks to everyone for making this happen.”

Santa Fe Station is the northernmost station on Amtrak’s Heartland Flyer route, which runs between Oklahoma City and Fort Worth with stops in Norman, Purcell, Pauls Valley, Ardmore and Gainesville, Texas.

It will be served by MAPS 3’s Oklahoma City Streetcar, plus EMBARK buses and a Spokies bike sharing station. It has charging stations for electric vehicles, a redesigned parking lot and room for expansion to accommodate possible future high speed trains and regional light rail service.

The station was built in the heart of downtown Oklahoma City for the Atchison, Topeka and Santa Fe Railway in 1934. The station’s architecture and interior epitomize the Art Deco era with carved and painted geometric designs, period chandeliers and aluminum canopies, door and window frames.

The renovation helped restore original architectural and design elements of the station, enhance the streetscape on E.K. Gaylord Boulevard and will soon improve the boarding platform.

Limestone and granite on the exterior was restored, and chips to the facade were repaired using stone from the same quarries as the original work. New paint uses the original color palette, and the historic terrazzo floors were restored where possible and used as a guide for modern flooring elsewhere in the building.

The ornamental grilles in the main hall have also been restored.  Modern light fixtures installed during the renovation replicate the Art Deco style from the station’s early days and copy the 1934 designs.

Many of the original doors were refurbished and fitted with new, replica hardware while replacement doors were modeled on the historic designs.

Other historic elements of Santa Fe Station restored as part of the renovation include a freight scale, pendant light fixtures in the main hall, columns and windows.

New features of the station like hanging signage and the Amtrak bench have also been designed to replicate the original styles used in the station.

The new stainless steel and glass sculpture called Connectivity that rests above the west doors was commissioned and designed specifically for Santa Fe Station by California artist Marsh Scott.

In February, crews will bore a pedestrian tunnel from the train station to Bricktown and build a plaza on the Bricktown side to complete the project.

The $28.4 million renovation project is jointly funded by the City of Oklahoma City (including MAPS 3), the Association of Central Oklahoma Governments (ACOG), the state Department of Transportation and a federal TIGER grant.

The restoration project architect is TAP Architecture, and the general contractor is Cooley Construction. TAP and Cooley are open house sponsors along with the City of Oklahoma City and EMBARK.

Read the original release at okc.gov.