The new entrance to the Oklahoma State Capitol is nearly finished. The entrance is on the building's east side.

Visitors entering the Oklahoma State Capitol will have a grandiose experience as they go into the people’s building, where a $193 million renovation project is more than 75% completed.

With 18 months still to go, Project Manager Trait Thompson and his team are on the short stretch to the finish. It would take five legislative sessions to get the restoration done and there are two more sessions to go.

The $245 million project started in 2014, when the legislature passed two bond packages to help with funding.

The entire restoration will be completed in 2022, though three pieces will be finished by the 2021 legislative session. 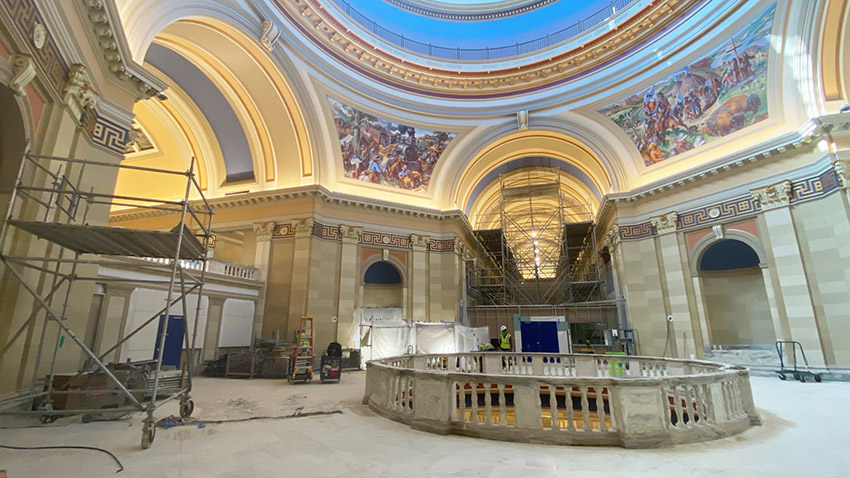 Work on the marble is underway in one floor of the rotunda.

“We’ll have the rotundas open in early 2021,” said Thompson with the Office of Management and Enterprise Services.

Another project that’s wrapping up is the new event space on the building’s first floor. This amenity can be reserved by the public. It will hold 200 people if tables are not used, though there are round tables and chairs that can be set up if needed and are kept adjacent to the meeting space. The large room can also be divided into two smaller rooms.

The third piece that will be finished by the 2021 session is the new entrance. Sitting below the eye view of the building, visitors will head to the east side to find the glass-covered entrance. The portico is attached to the existing building and has plenty of space for people to wait in the security line as they enter. The space is filled with natural light.

As soon as people enter the building through the new entrance, they find the gift shop, information about tours and a touch screen to get directions.

One of the goals with the restoration, Thompson said, is to make the building more visitor friendly. The 450,000-square-foot building was known to be confusing. During the restoration, rooms are being renumbered and once completed, there will be a touchscreen map at each elevator.

“We want to bring consistency to the building,” said Thompson.

The renovation had the end user in mind, which includes people who have to sit in the building all day. The finished dining room now has plenty of seats, with a restaurant counter that has access to a full kitchen. There are lounge chairs with charging hook-ups and two private rooms for nursing mothers.

There are temporary walls and doors installed all over inside the building. When one state office has to move so its space can be renovated, then a former empty area gets transformed. The temporary walls also help protect the public from the construction, so people don’t just wander into an active work zone.

Each state office in the building, including the legislators’ offices, are getting updated to the same look. In some offices, new carpet was installed, but if the original marble was discovered, then a rug was made to match the carpet.

“It was a hodgepodge of designs across the offices,” said Thompson. “Every reception area had a different look and feel.”

The finished offices will have a dark wood desk area, with light fixtures replicated to match the historic light fixtures found in the legislators’ hallways. In addition, every office space has dark wood built-in shelves, with granite countertops.

But that office work isn’t likely noticed by visitors. What people will see when they visit the capitol is the new color scheme. The walls now don tan paint in an alternating pattern, which shows off the block lines drawn into the walls. The pattern will help with upkeep, Thompson said. If the walls obtain any damage, then only the afflicted area has to be repainted rather than the whole wall.

The original plaster pattern on the trim in the public spaces is even more visible, with a blue background accenting the gold-painted design. A red-clay color is used in the new paint design as well.

Thompson said he gets asked frequently if its new plaster in the hallways; but it’s not, it’s simply more visible with the paint work.

The paint isn’t just in the hallways. The Blue Room, a popular place for press conferences, is getting hand-painted designs on the walls and the powder blue is being reduced.  The new darker blue will be used more frequently in the room. 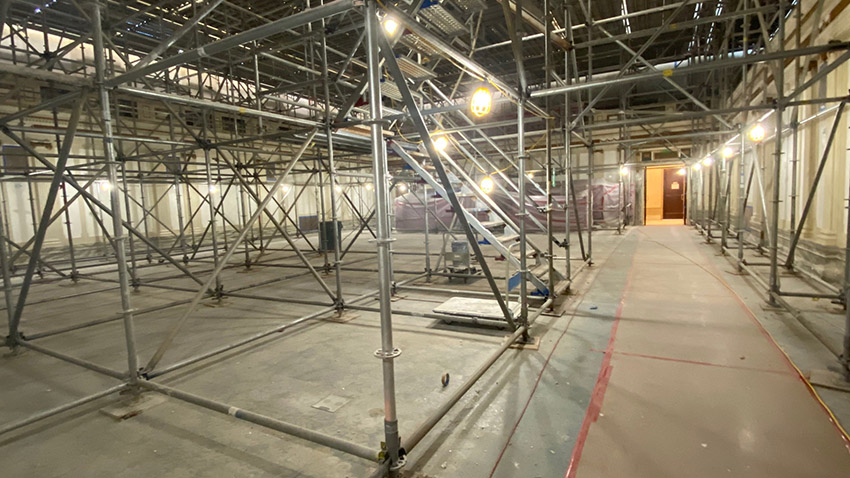 The House chamber is filled with scaffolding so the room can be painted.

The House and Senate chambers are being restored as well, with the work being done over two interims. During this interim, the rooms are being repainted with the new color scheme. The stained glass in the House chamber has been removed and is being restored.

During the 2021 interim, the carpet will be replaced and more painting completed.

Both chambers are filled with scaffolding, though each one has an empty area for people to stand. The space was left intentionally, Thompson explained, because the state constitution requires elected leaders to take their oath in the place in which they will serve. In November, the swearing-in ceremonies will be held in each chamber, though guests will be limited.

It’s been 20 years since the chambers were last updated.

Besides paint, the capitol’s meeting rooms and chambers will have full audio and video capability. Thompson was especially proud that the Senate committee room was complete, which was the previous home of the Oklahoma Court of Criminal Appeals. Because the room was now stocked with A/V and web video capabilities, online video meetings could be held and there was enough space for everyone present to space apart.

All the A/V installation is only one part of the infrastructure updates that were done during the interior renovation. The building has new electrical, air conditioning and heating systems, as well as new elevators and motors. All the lights have been updated to take LED bulbs. The entire building has finally been fire sprinkled. There are also three times as many security cameras in the building than prior to the renovation. 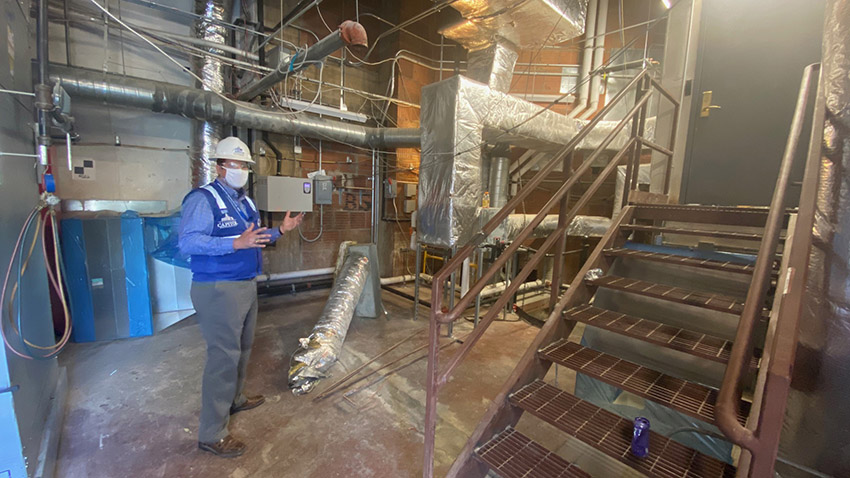 Project Manager Trait Thompson shows off all the new infrastructure in the capitol's attic.

“About 80% of the building wasn’t fire sprinkled before this project,” said Thompson.

Putting in all these lines required some creativity to get the lines out of sight. That’s why some of the old drop ceilings were removed, while others remained or new ceilings were added. There are limited number of ways to put in lines that have to be hidden, especially in a historic building.

The new elevator doors were recreated from designs of the originals, which feature an ornate design.

The building and the two chambers are also getting several updates that fit the standards set by the Americans with Disabilities Act. Even the dais in both chambers where the presiding officers sit will be ADA accessible.

But the front steps couldn’t be made ADA accessible, Thompson said, without disrupting the building’s historic look. Similarly, that’s why the new entrance is built at a subterranean level. While the addition complements the building, it doesn’t have the ornate stonework seen in the capitol.

The front portico will have a multi-color lighting system that can be lit to fit the season or a particular day. The original steel pocket doors were completely restored and can be opened. 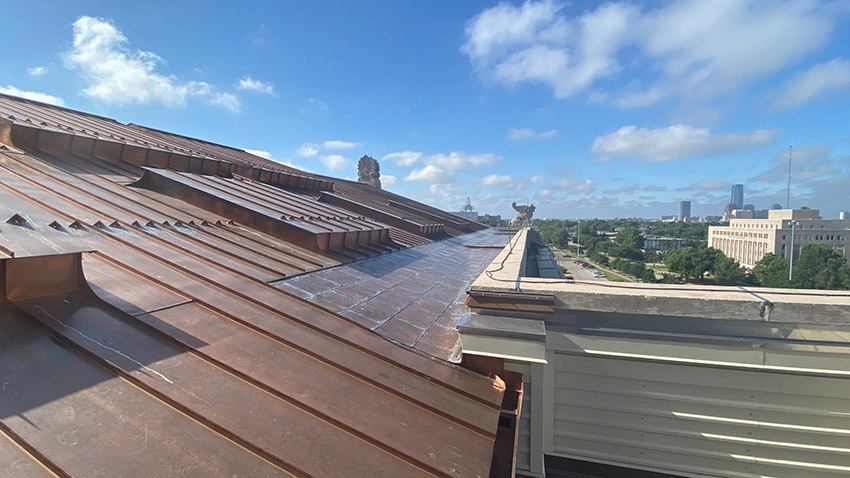 The $9 million copper roof glistens in the sun, though it will keep the building dry on rainy days for years to come.

The rest of the exterior updates were to help seal the building, Thompson said. The project included restoring – not replacing – 477 windows and putting in 21 miles of new mortar in the limestone facade. Over 4,600 stone repairs were completed. The copper roof was replaced, which should last another 80 years, he said. There were also lead t-caps attached to the stonework on top of the building, preventing water from creeping into the mortar over time. A tin cladding was added on the interior pediment walls adjacent to the roof, helping to keep water out as well.

“Everything about this building will last a lot longer than it would have before it was restored,” said Thompson.