Oklahoma City will pull back the curtain on its new inland Surf OKC experience Saturday, Aug. 29, at RIVERSPORT Adventures in the Boathouse District. It is the first surfing experience to open in Oklahoma. 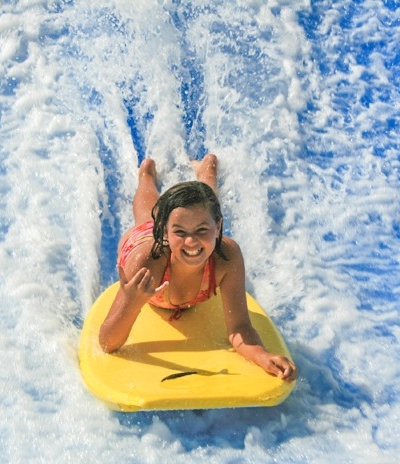 “We’ve been waiting for this for a long time,” said Mike Knopp, executive director of the RIVERSPORT Foundation which oversees the Boathouse District. “We can’t wait to introduce surfing to Oklahoma City. It’s going to bring a whole new dimension to RIVERSPORT.

“We originally anticipated being open much earlier in the year,” Knopp said, “but the coronavirus caused multiple slow-downs in construction and inspections. We’re just excited to have it open now. Snowboarders and skateboarders are going to take to the surfer naturally. Everyone will watch a short how-to video and our surf guides will help novices get started, but we expect people to catch on quickly.”

Knopp said Surf OKC will be included in the adventure park’s day and season passes. RIVERSPORT offers white water rafting, flatwater kayaking and stand-up paddle boarding, a bike park and land adventures including zip lines, high-speed slides and a six-story adventure course. RIVERSPORT is a U.S. Olympic and Paralympic Training Site for both rowing and canoe/kayak and has coached competitive programs for both youth and adults.

“The MAPS 3 RIVERSPORT project was designed to offer unique outdoor amenities to our residents and visitors, and Surf OKC certainly furthers that vision,” said Oklahoma City Mayor David Holt. “I can’t wait to hear people say that they learned how to surf in Oklahoma City.” 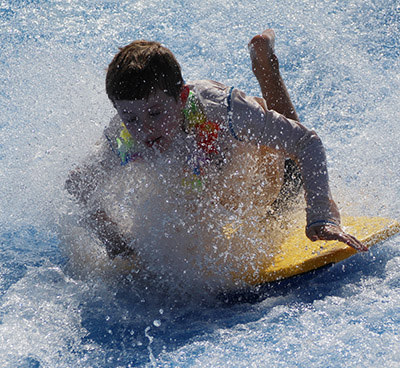 Surf OKC is presented by Lopez Foods, the primary sponsor of the experience.

“We are excited to be part of Oklahoma City’s first surf attraction,” said Ed Sanchez, CEO of Lopez Foods. “We also believe in what RIVERSPORT is doing for undeserved youth. Their summer camps, rowing and kayaking programs are giving these kids access to outdoor sports and recreation they never would’ve had before.”

A ribbon-cutting will be held at 11 a.m. Friday, Aug. 28, and will include a virtual event via the Greater Oklahoma City Chamber. Professional surfers will be on hand to demonstrate the surfer. The live event will be socially-distanced and guests are asked to wear masks.

Surf OKC will remain open on weekends through the end of September and will also hold special “sunset surfing” sessions from 4 to 8 p.m. on Thursdays and Fridays through the end of the season. Surf OKC is open to ages 8+ and day passes for surfing start at $19.99.

RIVERSPORT will offer group surfing lessons, a surf camp this fall, and a surf team for next spring. Persons can reserve private events and birthday party packages.

“We will ask everyone to start by body boarding to be sure they have the hang of it before they get on their knees or stand,” Knopp said. “It won’t be long, though, before you’ll see kids doing tricks out there. And our RIVERSPORT Xtreme Team of raft guides can’t wait to hop on a board.”

Knopp said RIVERSPORT will offer a Junior Surf Camp starting Aug. 29 and running for five weeks on Saturday mornings. Youth ages 10 to 16 who have an interest in surfing can come out to learn what it’s all about, then become part of the newly-formed RIVERSPORT Junior Surf Team. Camp registration is available online at riversportokc.org/camps.

The Flowrider was purchased from Aquatic Development Group, Inc. and is the state-of-the art in surf wave technology. Hornbeek Blatt served as architects while Downey Contracting handled the building of it.