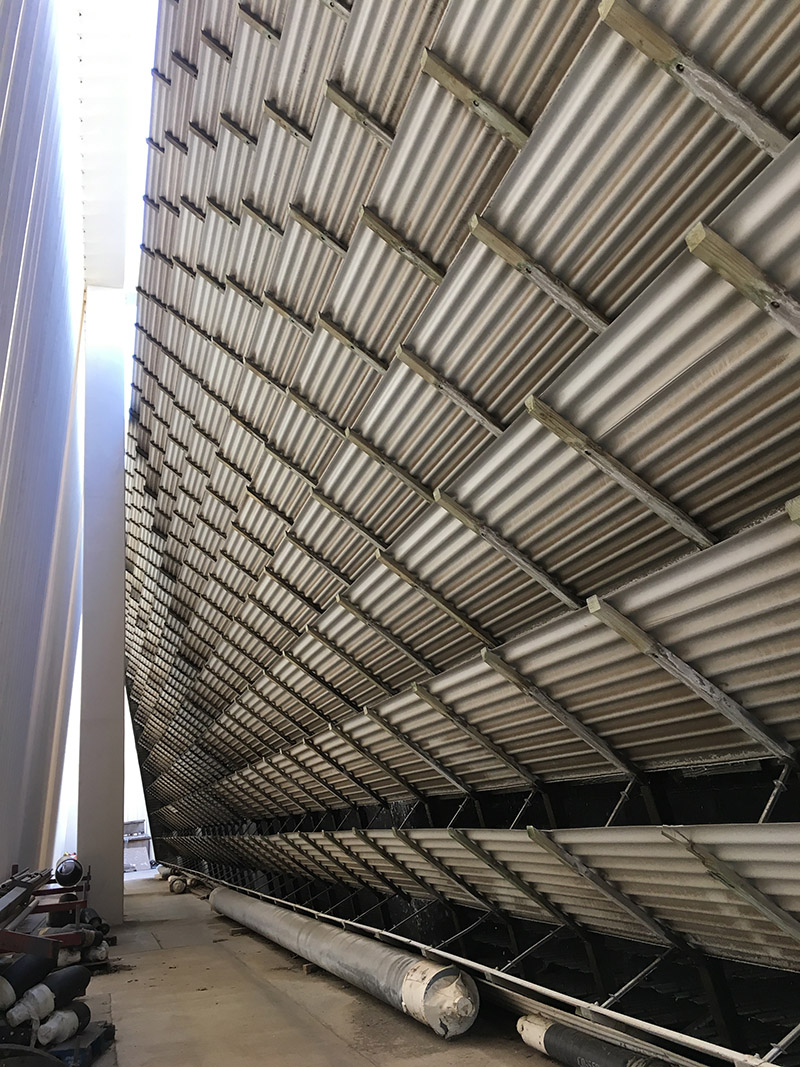 The structure at Sheridan Avenue and E.K. Gaylord Boulevard houses a waterfall-like tower, which is part of the district energy system.

For several weeks, downtown Oklahoma City employees and residents were able to see a huge painting project, though another more colorful phase is planned as well. Veolia recently completed the painting and refurbishment of their large structure at the corner of EK Gaylord Boulevard and Sheridan Avenue.

This structure surrounds the cooling towers for the district energy plant. Veolia owns and operates the entire district energy system in downtown. The structure’s walls are not solid, but a screen consisting of a series of louvers designed to let air flow through.

When the painting was underway, the Downtown OKC Partnership reached out to Veolia about using the freshly-painted south tower screen for a public art mural. Due to the unique louvered panels, one possible approach is for the mural to be lenticular, meaning the image changes when viewed from different angles.

DOKC has issued a Request for Qualifications (RFQ) to all professional artists and responses are due by July 12. Veolia and DOKC are looking for a design that aligns with Veolia’s goals of pursuing environmental responsibility. Veolia is a global environmental company offering solutions in water, waste, and energy that promote sustainability and the circular economy. 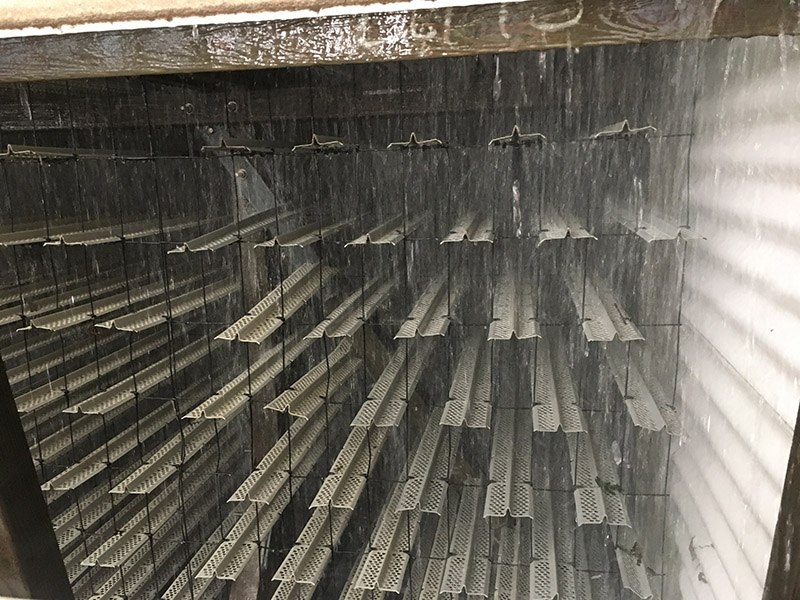 Water runs over the fills, which are housed by the screens shown in the above picture.

The district energy system provides heating and cooling to many of the buildings in the central business district. The system pumps hot water, steam, or chilled water to multiple buildings through a network of underground pipes from the central facility eliminating the need to place chillers or boilers in each building and cooling towers on the roofs.

Oklahoma City’s district plant was built in 1970 by Thermal Systems Inc., a subsidiary of Oklahoma Natural Gas. In 1989, the system was sold to Trigen Energy Corporation, and later sold to Veolia in 2007.

The plant was designed by the notable architectural firm, Bozalis, Dickinson, Roloff, which also designed the Gold Dome, Leadership Square, the Heritage (formerly The Journal Record building), and many other properties around the city. Engineering was provided by C.H. Guernsey, whose firm still operates in Oklahoma City.

The system was originally designed to burn natural gas to power the turbines, boilers and chillers. Over time, electric chillers and pumps were added. But if the electricity goes off in downtown, the original turbines are there and can be run by natural gas. Having the flexibility of two fuel sources is what allows Veolia to maintain its reliability, said Todd Lewis, General Manager.

District plants similar to the one in Oklahoma City are located in many cities across the world and most universities, hospitals and industrial complexes utilize the same approach to heating and cooling.

Construction on the 2,000-foot extension to the center is being done with great consideration for downtown traffic. The line will run South down Robinson and under the Oklahoma City Boulevard.

“Our goal is to work with the City of Oklahoma City to minimize impact to traffic and not affect the streetcar line,” Lewis said.

The convention center at SW Fourth Street and Robinson Avenue is slated to open in September 2020. The neighboring Omni Hotel will open in 2021.

The Downtown Oklahoma City district energy system will be celebrating its 50th Anniversary in 2021. The company hopes to have the mural completed to coincide with a celebration marking this milestone in Oklahoma history.

The company invites groups to tour the facility and learn more about district energy. Tours can be scheduled by contacting Diane Stroud at diane.stroud@veolia.com or by calling (405) 272-0388.