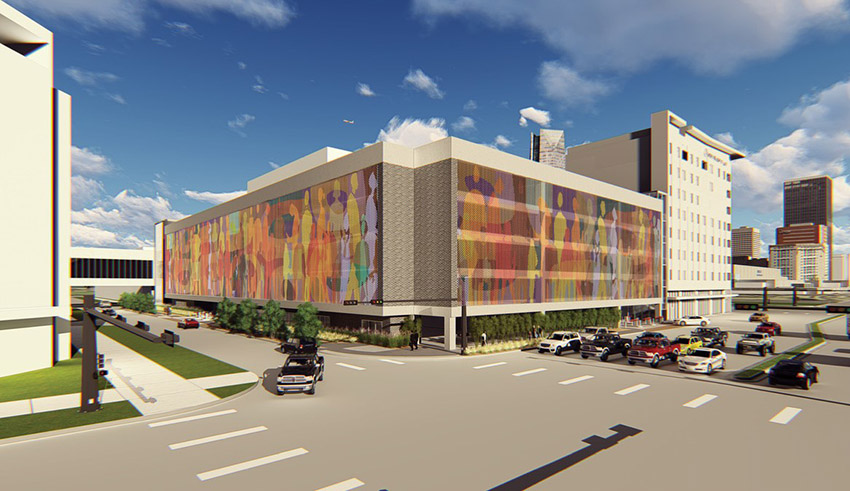 England-based artist Martin Donlin fell in love with Oklahoma City when he came to visit as a finalist for the terrazzo design projects for the Will Rogers World Airport Terminal expansion.

The glass artist said he was more interested in the glass walls that will encapsulate the above the airport’s public circulation area. While he missed out on that opportunity, another one came along shortly afterward that was more his style.

Donlin was chosen as the artist for the exterior ”skin walls” at the new parking garage near the MAPS 3 Convention Center and Omni Hotel. The six-and-a-half story, 1,100-space garage was designed by TAP Architecture and is being built by Manhattan Construction Co.

“This project interested me because it’s a parking garage,” he said. “You should see the parking garages in this country. They look terrible. But this one will be gorgeous.”

Donlin’s work is named for a line from William Shakespeare’s play, “Coriolanus” where Sicinius asks, “What is a city but the people.” The concept utilizes multiple layers of pattern and imagery exhibited through the placement of polycarbonate tiles and fastened to steel cables spanning from the second to the sixth floor of the parking garage. The result of Donlin’s design weaves together an eclectic mix of cultural and natural elements, with inspiration drawn from both the ancient and modern worlds. Ancient Greek sculpture, the Oklahoma sky, Oklahoma City architecture and traditional Native American textile patterns all contribute to the final design, an ode to Oklahoma City and the modern public square.

The piece will wrap around the east, west and south side of the building, with the people images measuring multiple floors. From the outside, viewers will be able to see the entire image, but on the inside looking out, users will see parts of torsos and bright colors.

Donlin said using people in the piece was an obvious choice because the building is near many active sites, including the convention center, hotel, Scissortail Park, Chesapeake Energy Arena, and newly proposed Thunder Alley.

The art is being funded through the City’s 1% for Art ordinance. Donlin was chosen out of a pool of 34 artists, said Robbie Kienzle, arts liaison and program planner for the City’s Office of Arts and Cultural Affairs. He was the only international artist to apply for the project. 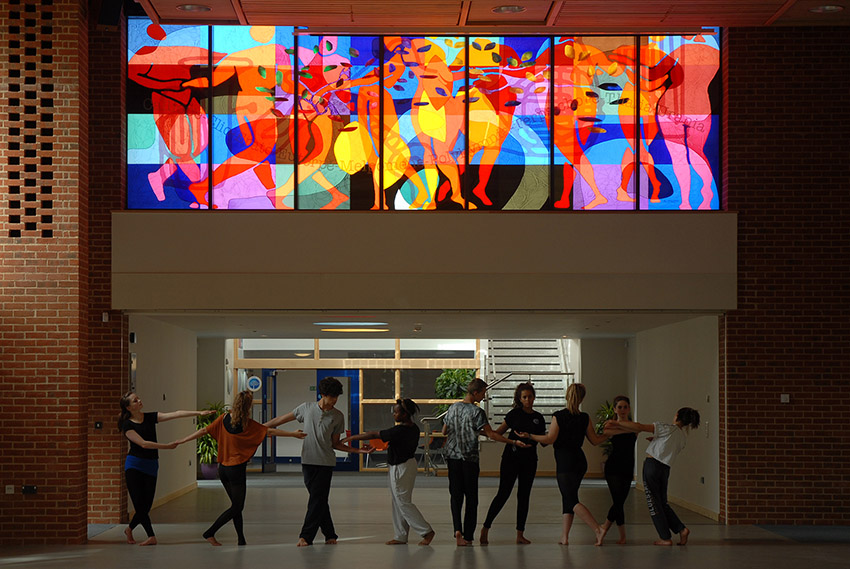 Donlin's "Dance of the Muses" is on display at Coleridge Community College in Campbridge, England.

This project is slightly different than the other 1% for Art projects because the work is incorporated into the facility’s design. Architect Anthony McDermid said he and his team created a tile system for the building’s exterior skin, with the ability to have that tile system turned into art.

This is McDermid’s second parking garage to design for The Central Oklahoma Transportation Authority, which oversees EMBARK, among other programs. TAP won awards for its light-filled Arts District Parking Garage.

“Everyone seems to love that garage,” McDermid said. “They love the color and the openness. The light penetrates deep into that garage and creates an elevated user experience. It was important to COTPA for people passing the garage to have a positive experience as well. That’s why we were hired. COTPA wanted to provide a higher-than-normal use experience from that outside than you’d expect for a receptacle for cars.”

McDermid created his own high bar of expectations with the Arts District Garage, said EMBARK Parking Services Manager Cory Hubert. When it came time for COTPA to build another garage, the next one had to be even better. Incorporating the $134,250 project budget into the overall building helped with costs and allowed for an even more beautiful piece, Kienzle said.

The site is next to one entrance into downtown Oklahoma City, off Interstate 40. The art, especially at this entryway, sets a tone for the city, said Kienzle.

“I think it’s nice to have works like this in the built environment that reflects our community’s personality,” she said. “I think the art selected not only represents the talent of the artist, but how excited we are about our city.”

While the art will bring vivid colors to the new Park Union District, it still has to be a functional parking garage. Garage construction is going well, Hubert said, with concrete pourings scheduled for the sixth floor in June. It takes about a month for each floor to be finished.

The garage can be expanded to park 1,400 cars if needed. The first floor will be home to the new operations office for EMBARK’s parking system.

For the user, drivers can expect to find the newest equipment. Hubert said he and his team calculated the number of customers, which includes the future apartment residents, then doubled the amount of parking entry and exit devices. His team had to consider that convention attendees could be exiting the garage the same time as evening traffic starts leaving downtown.

“We went real heavy on equipment in order the serve the entire community – not just our customers – in a positive manner,” he said. “Almost every entry lane can be turned into an exit lane with the click of a mouse.” 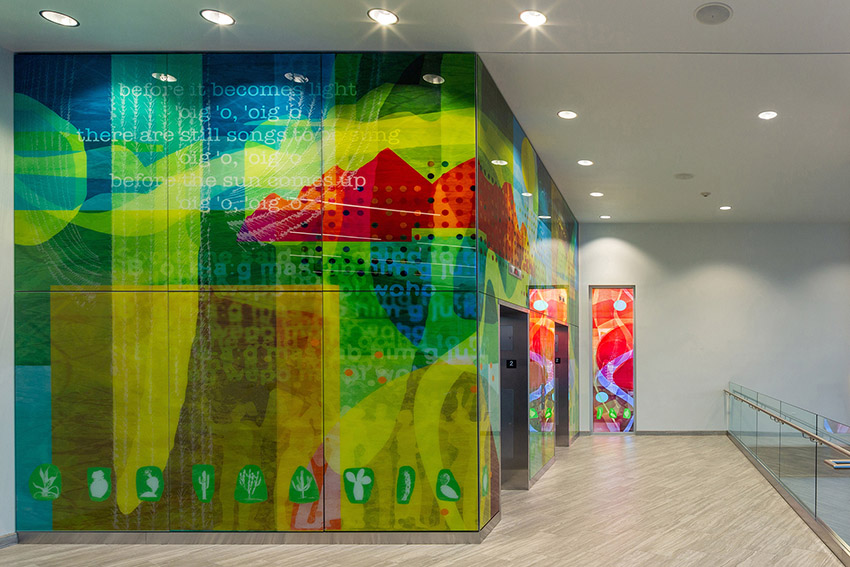 Travelers to the Scottsdale, Arizona airport can see Donlin's "From Land and from Air."

The exterior art piece in Oklahoma City is scheduled to take shape in September. Donlin is currently looking over the more than 102 colors available in the Duo-Gard tile line. He’s color coding the tiles in the piece so they can be installed this fall. He’s working with Tony Morton at Kasum Contemporary Fine Art, who will oversee the site installation and represents him as needed.

Donlin said if he’s able, he plans to visit Oklahoma City soon. He said he’s thrilled to have his work here.

“The public art is really interesting in this city. It’s like a gallery,” he said. “You have your own collection. It seems to be a part of the fabric of this city and you have the funds being able available for it. It’s encouraging to go somewhere and see that you’re being considerate of what your city looks like, rather than just about concrete blocks.”