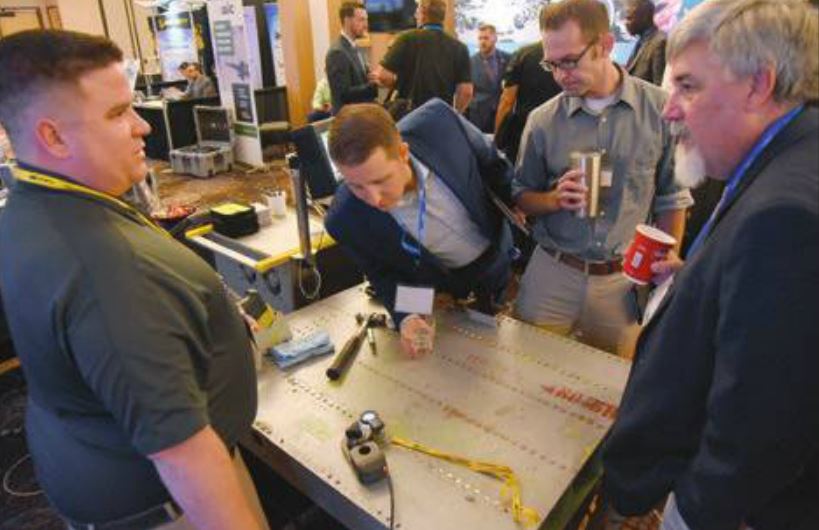 The 14th annual Tinker and the Primes Conference kicked off Aug. 13 with a keynote address by Oklahoma Gov. Kevin Stitt on how Oklahoma is “open for business” and the significant impact that the aerospace industry contributes to the state’s economy.

This year’s conference theme, “Enterprise Collaboration to Increase Readiness,” was reflected in Stitt’s opening remarks as he cited the ways in which Tinker Air Force Base and its operations have been a driving factor in bringing more than 100 aerospace companies into the state.

“Aerospace is such an important part of our state, we’re so proud of what Tinker does and everything they do that contributes to our economy,” Stitt said. “Aviation is just a huge cluster in our state, with 100 companies almost all based around Tinker.”

A further impact on aerospace Stitt discussed is his administration’s investment of an additional $18 million in career tech jobs. By funding career tech opportunities and further increasing education funding, Stitt said this fuels the jobs of tomorrow and helps Oklahoma become a powerhouse for aerospace opportunities both in-state and nationally.

Stitt’s remarks were followed by a presentation by Assistant Secretary of Defense for Sustainment, Robert McMahon, who stressed the role that sustainment operations and advances play in helping to sustain the national defense strategy of enhancing readiness, building partnerships and enhancing significant reform.

An ideal future partnership setup within the next 10 years is something that McMahon described as 80 percent public and 20 percent private collaboration on issues of aerospace, as opposed to the current opposite distribution of collaborative efforts. Support from Stitt and other state leaders is something McMahon said is exciting to see in building opportunities in this regard, especially in the way that state government has supported the state’s military installations and military families.

“If we can bring folks to the state that are interested, excited and talented, all this does is help this great state’s opportunity to do even better,” McMahon said.

The conference wrapped up Thursday with a keynote address from Brig. Gen. Chris Hill, commander of Tinker Air Force Base’s Oklahoma City Air Logistics Complex, on the transformative role that the ALC has in maintaining readiness within the U.S. Air Force.

“The ALC of today is not the ALC of 10 years ago,” Hill said. “Today we maintain, repair and overhaul aircraft, aircraft components, aircraft engines and we develop software. Those are our four main product groups and that is a change of the ALC of old.”

Emphasizing the role that partnerships and collaborations have in the success of the OC-ALC, Hill highlighted the need to maintain strong ties between the industry, academic and government partners that contribute to the overall success of OC-ALC.

“None of us can be successful by ourselves and it is absolutely imperative that we have clear communication, understanding, transparency, credibility and accountability across all of these partnerships,” Hill said.

While serving as the Air Force’s largest depot, sustaining approximately 76 percent of the Air Force weapon systems through the OC-ALC, Filcek said that the base’s forces and capabilities made it more than just a depot and instead a key operational support base for the Air Force.

Filcek also highlighted the major infrastructure updates the base has been undergoing to not only make the installation’s gates compliant and its perimeters more secure, but also in making it’s WWII-era buildings more modern to support operational readiness.