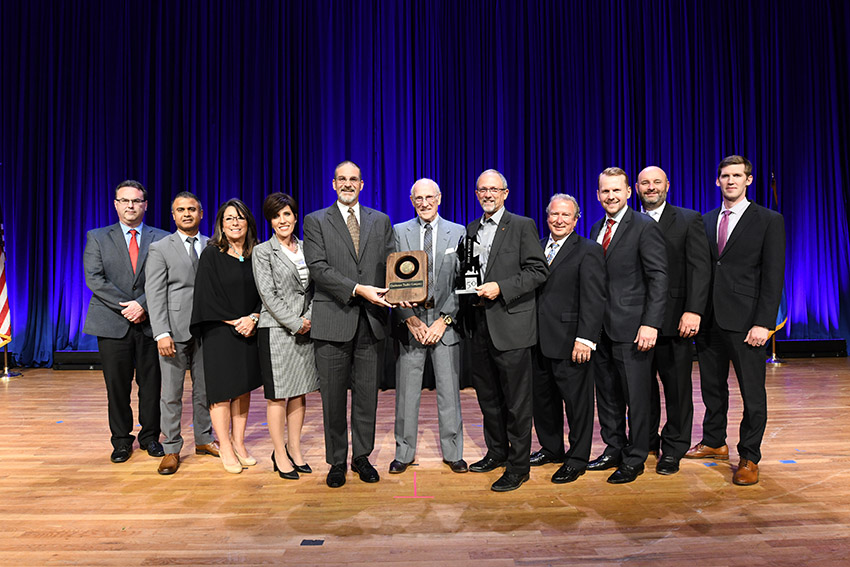 Clubhouse Trailer Company representatives accept the Metro 50 Award at the banquet held last month. The metropolitan area's fastest-growing privately held companies are ranked based on their percentage of annual growth between 2016 and 2018. Qualified companies are required to have revenues of at least $1 million for the previous year.

By: Jennifer Sharpe via The Journal Record

Clubhouse Trailer Co. started in 2010 when two band dads, Drew Taylor and Jeff Hadley, were approached by the director of Edmond Memorial High School marching band and asked to build a trailer to move their equipment safely and efficiently.

Over nine months, in more than one location and with many helpers, the first trailer was completed.

“We never anticipated that it would go any further than building one trailer,” Taylor said. Impressed with Edmond Memorial’s trailer, other programs began calling Taylor and Hadley for advice and offering to pay them to build trailers for them, too. Working part-time during nights and weekends, the pair built 10 trailers in the first seven years of the company.

“In 2017, we got busy enough that we had to do things differently,” said Taylor, Clubhouse’s president and chief operating officer. He took early retirement from FedEx and made Clubhouse his full-time career, churning out 10 trailers that year. Clubhouse built 23 trailers in 2018, which was also the year that they moved to the company’s current 12,000-square-foot location in north Oklahoma City.

“We built to our specifications so that we could be the mecca of marching band logistics in America,” said Taylor, who anticipates Clubhouse will make 46 or 47 trailers this year.

Clubhouse Trailer currently has customers in seven different states, and their reach extends as far as Utah, Michigan and Georgia. Clients are predominantly high school band programs, and they also build for college marching bands and college football trailers. The company currently employs six, and has considered adding to staff as growth continues.

Clubhouse’s primary product is a full custom trailer, which is a six- to nine-month process that starts with a gently used 53 foot moving van.

“We are now the largest consumer of used moving vans in the country,” Taylor said.

Trailers are DOT-inspected and then fully refurbished, sandblasted, primed and painted. After getting wrapped at an outside facility, the trailer comes back to the shop for the build-out. The expected life span of a new trailer is about 20 years. Clubhouse also provides parts or a standard build-out as kits for groups to do installation on their own. The company’s “Trailer in a Day” program is an on-location build where Clubhouse will go to the client and work with their volunteers to get a trailer put together in a day.

“We haven’t been able to meet the need, so we look for solutions that can be done in phases based on timelines or financial limitations,” Taylor said.

“It’s nice to disrupt an industry. It’s even better to create one,” Taylor said. “We are the only company that does this in the world. We have grown Clubhouse to a size that is beyond what either of us dreamed of. We have impacted more than 10,000 students since we started.”

Read the original story at journalrecord.com.