OKC VeloCity | Bridenstine: We are going back to the moon
Aerospace

Bridenstine: We are going back to the moon 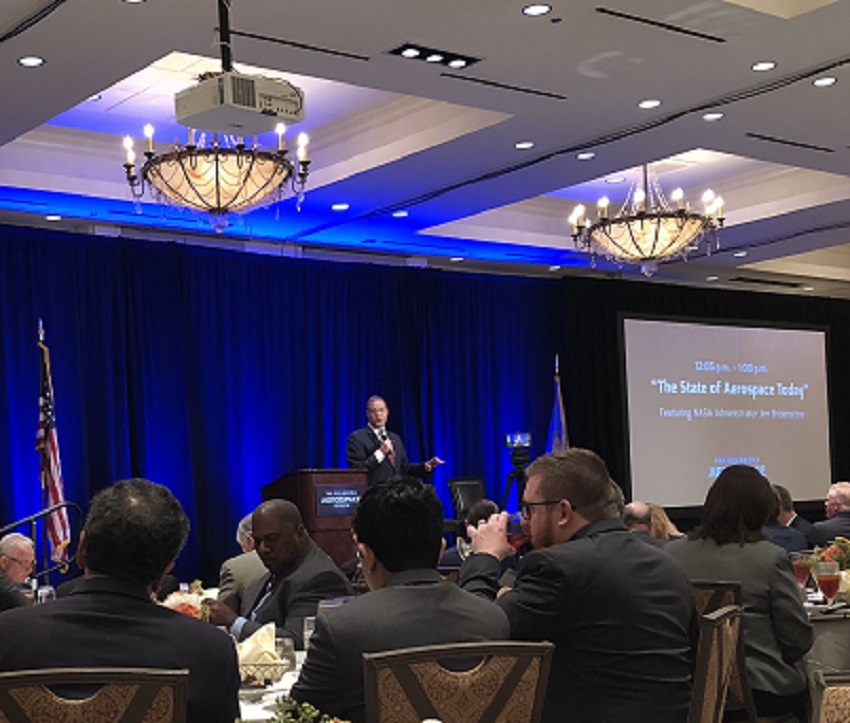 The United States will return to the moon in a way that has never been done before, National Aeronautics and Space Administration Administrator Jim Bridenstine said recently.

Bridenstine, who has led the agency for about seven months, gave the keynote address to the Oklahoma Aerospace Forum, held at the Skirvin Hotel on Oct. 30 in downtown OKC. About 200 people attended the forum.

Even as he paid tribute to some of Oklahoma’s aviation pioneers, Bridenstine, former U.S.  Representative from Tulsa and executive director of the Tulsa Air and Space Museum, said,

“Space is not unique to Oklahoma, we have a long history of being involved in America’s space enterprise. And, the future is very bright, not just for Oklahoma but for the whole country.”

Referring to the Trump Administration’s Space Directive One, which provides the space agency’s goals, Bridenstine said he wanted to make it clear that the United States is not going back to the moon, but going forward to the moon.

The return to the lunar surface will be done “in a way that has never been done before — sustainable. We are going to have a reusable architecture so this time when we go to the moon, we are actually going to stay.

“And in fact, we are going to retire the risk and take all of that technology and go on to Mars.”

“What we are doing now is, we are going to buy access to space,” Bridenstine said. “Instead of purchasing, owning and operating rockets that can take our astronauts to the international space station, we are just going to buy a ride on a commercially owned and operated rocket.”

He said the goal is to have several providers that compete on cost and innovation to drive down the price.

“The reason for all of this is because then NASA can use its money, we can use government resources, to go further and do more than we have ever done before, especially in areas where commercial markets don’t yet exist, mainly to the moon and then on to Mars,” he said.

Bridenstine said it would be a stepping stone process, but the nation could get there.

Currently, there are two partners to commercially take astronauts into space. One is SpaceX and the other is Boeing, using a rocket provided by the United Launch Alliance.

Bridenstine said he envisions a day when there are going to be commercial enterprises going on in low earth orbit, such as tourism and manufacturing.

“We believe there is a very robust commercial marketplace for low Earth-orbiting enterprises where NASA can be one customer of many customers and there are numerous providers competing on cost and innovation,” he said.

The Oklahoma Aerospace Forum was held so that Oklahoma aerospace executives and senior managers could discuss the current state of Aerospace in Oklahoma and learn about new efforts to support the industry.