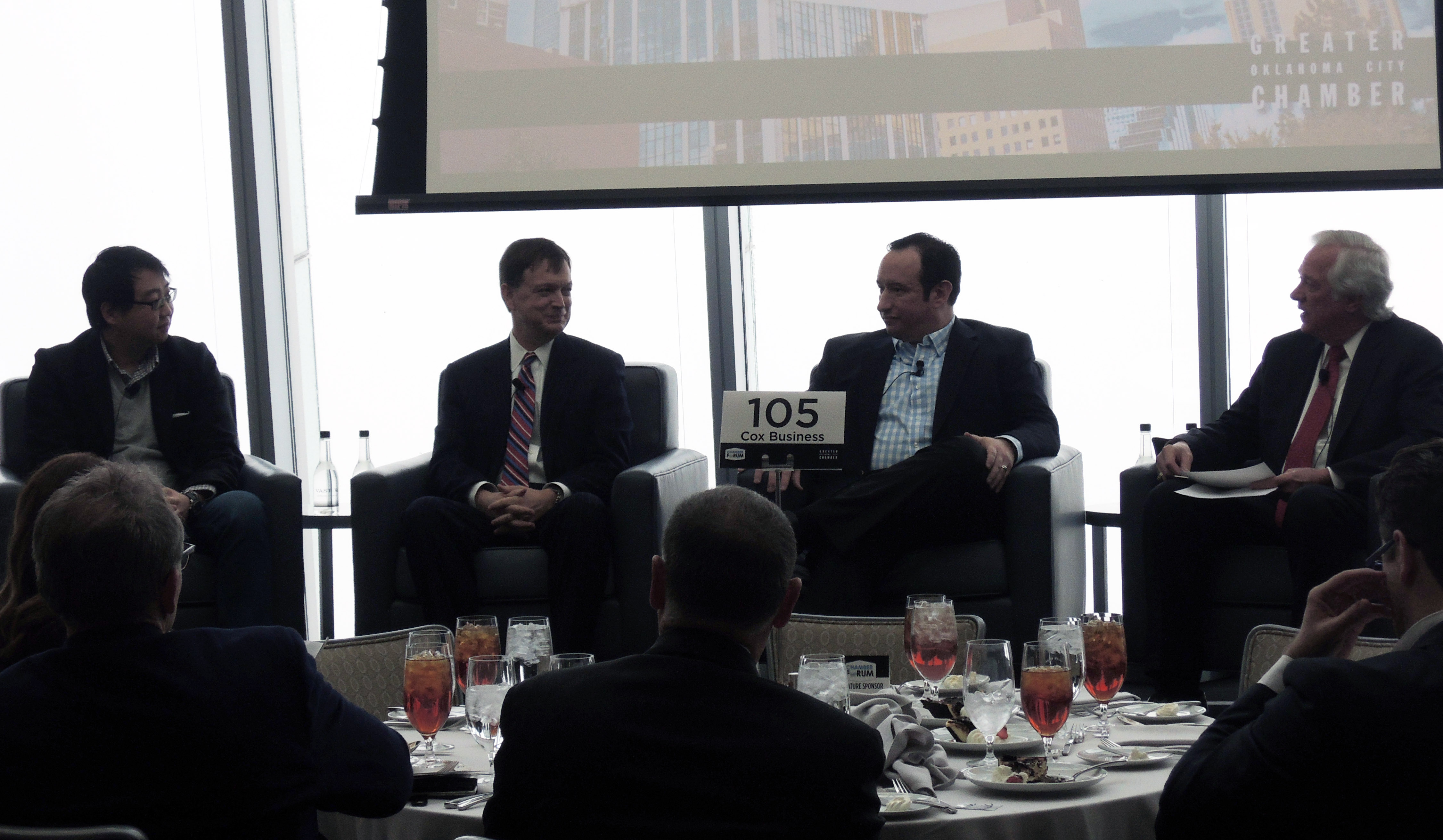 For U.S. cities looking to become the next big tech hub, it's not enough to just recruit eager entrepreneurs. Cities also have to attract the employees (coders, designers, salespeople) who can keep the startup afloat.

Over the past few years, Oklahoma City has been nothing short of relentless in proving it can attract the nation's top startup talent, while retaining the best and brightest home-grown talent.

At a recent Greater OKC Chamber Forum, more than 110 business leaders gathered at Vast, on the 50th floor of the Devon Tower, to hear about OKC’s start-up community from three of the area’s experts; Danny Maloney, CEO and co-founder of Tailwind – a Pinterest & Instagram marketing tool; Scott Meacham, president and CEO of i2E - a nationally recognized private not-for-profit corporation focused on growing innovative small businesses in Oklahoma and making a positive impact on the state's economy; and Tommy Yi, co-founder of StarSpace46 - Oklahoma City's premiere co-working space and hub for technology and entrepreneurship.

The three were asked to provide their views on the OKC startup ecosystem, resources that might be missing in OKC that entrepreneurs would need to overcome, challenges in transitioning from start-up to growth, possible issues in the state legislature, exit strategies, and to give their view of what is next for the region's startup community.

The three were unanimous in what makes the area attractive for entrepreneurs and it should be no surprise to those who live, learn, work and play here.

“I talk to a lot of friends who are still on the coasts and they’re getting burned out,” said Maloney. “They’re tired of the exorbitantly expensive tiny apartment they’re living in and the high taxes they’re paying and the absurd day care rates and stuff like that. The message that you can have a great career, you can do really interesting, meaningful work, you can make good money and, by the way, you can still have time for a life, there’s a lot of good stuff to do here, that’s actually a big differentiator for a lot of folks.”

Meacham added, “The cost of doing business is incredibly competitive in Oklahoma. The cost of energy, the cost of real estate, compared to either coast, you’re getting an amazingly good deal. You can build a lot of businesses just around leveraging the cost savings that you would get just by relocating those businesses from either coast to Oklahoma. The quality of life, it’s so much different in Oklahoma. You don’t spend as much time in your car driving back and forth to work every day, there’s much more of a sense of community here, it’s just a different lifestyle here, that a lot of people find is just a great place to live and raise a family.”

“Support your local companies. If they provide a service, keep it local... I think we have to be our biggest advocate for our companies, telling their stories and being the biggest advocates for them both in and out of the state.” - Tommy Yi, StarSpace46

“Oklahoma City is a sandbox,” according to Yi. “You have opportunities to create your own successes that you are not afforded in any other city. I think it’s that sandbox mentality, appealing to the crafters and the makers of the world who want to mold something out of nothing, I think that’s really important for Oklahoma City but I also think that’s what’s going to help grow and drive OKC to becoming not just the next Austin, but, I think, the next better than Austin in 20 years.”

Wait. What? Did he really just say that Oklahoma City will surpass Austin? Austin, Texas??

Indeed, he did. And Maloney and Meacham agree with him.

“I think we’re at an interesting point in our city’s history,” said Meacham. “Clearly, I think we’ve entered the era of the high-growth entrepreneur. My question is, will the next five years look like the last five years, because we’ve seen a remarkable number of really good companies in the past five years. I think that success begets success. We were talking about Austin, and Austin had Dell Computer, right? And Dell Computer was a big success, and there’s been other successes around the country in sort of the non-Silicon Valley, East Coast types of markets where you see they had a really big success and then that created all these other successes. We’ve (i2E) got some pretty nice deals out there right now. We had our first two big exits in the last 12 months, WeGoLook and Selexis Pharmaceuticals. And I think we’ve got a couple of other pretty nice ones in the pipeline. I think when those occur, a lot of things happen. One is, people start taking notice of you. More talent comes to Oklahoma. More capital comes to Oklahoma. And everything feeds off of each other, like you’ve seen. If we can continue this momentum we've had and we can continue to build on the success, I think Oklahoma City could actually surpass Austin, in the long run. Because of our geographic location, because we don’t have the central core restraints that Austin does. So I think there’s tremendous upside.”

“I think there are probably at least half a dozen to a dozen, somewhere in that range, companies that are further along at this point that have established business models, they’re growing, they’re building, and have a chance to become very significant, very meaningful,” added Maloney. “Companies that have a shot at becoming nine-figure revenue companies, where they’re employing lots of people and growing substantially. I think if we get two, three, four more of those in the local community, that starts to paint the picture of success begetting success. You have new entrepreneurs who are looking at that saying ‘hey, it’s possible’ and it’s not just one or two success stories I can point to, it’s a bunch.”

So, what will it take for that to happen?

“You need access to high-quality, talented folks who want to join the team and who want to contribute,” according to Meacham. “You need access to capital to be able to grow as rapidly as you could, or want to. I think there are solutions to that, I mean, we’re making progress day-to-day, but obviously the more we grow our community the faster it grows, the easier those things are gonna become. That’s it.”

“I think it’s human capital. I think we’ve gotta work on human capital,” noted Meacham. “It’s coders, I think we need more coding camps and coding nodes around. More people with the STEM kind of skills we need to fill these companies and move them forward. Because I think money follows good ideas, and I think if we can do that, and then I think the tech infrastructure, it’s always gonna be there.”

“I would say the human infrastructure, relationships, making sure that we have an ecosystem here that can provide what I think are sort of the three fulfillers of what keeps people in the city,” said Yi. “Having great commerce and industry, having a solid foundation for education that supports industry, and then, having enough culture that retains young talent here that want to remain here. So, if you have a balance of all three, that’s kind of typically when you look at all the great cities and how they’re not only able to retain their talent, but attract talent. Those are kind of the three pillars that you normally see.”

Maloney agrees with his colleagues.

“A lot of the folks that do apply for roles with us are typically in that age demographic, late 20’s, 30s, or 40s, where they have school-aged kids, or they’re thinking of having school-aged kids, and part of the reason sometimes they’re looking to leave a New York or an LA or Chicago, is because they feel like this is a better place to raise their family.”

But there are some challenges. The education issue that has plagues Oklahoma for several years is now garnering national attention, and the national media is not painting a very pretty picture of the state.

“The problem is, perception becomes reality,” according to Meacham. “If you go back to the pre-Thunder, oil bust days of Oklahoma, the world viewed us, not very well. And that, sort of, magically changed when the Thunder came and we had the MAPS projects and we reinvented ourselves. Unfortunately, we’re starting to see bad stories in national publications. People see those. There’s bad stories about four-day schools and guess what? That potential employee is reading those stories and doing their due diligence and seeing that kind of stuff. So, one of the best things we could do is just kind of eliminate those bad stories.”

“I think Oklahomans can do a better job being a louder megaphone in terms of all the good things about the state,” said Yi. “I travel a lot and I’ll fly out to Seattle or San Francisco and I tell them I’m from Oklahoma and they immediately have this image in their mind of what Oklahoma is. But then, the more and more I talk about all of the great things here, they’re like, wow, if I didn’t know any better I’d almost want to move there. I’m in Europe a lot as well, and when we talk about Oklahoma to them, Oklahoma’s this magical wonderland of opportunity. Whenever you talk to people internationally, or even people who have moved here from the East Coast or the West Coast, I think the one thing that they’ll tell you is that we are oftentimes our own worst enemy, in that, we’re often apologetic about all the bad things, instead of saying no, here’s all the good things!”

But, what about all of that local talent, aren’t they heading to the coasts and all of the “real” tech start-up jobs?

“We just hired a very bright student out of OU, exceptional computer science skills coming right out of college, and I was talking with him one day and he reiterated this point that the attitude on campus is all the best students move out, all the best students go to work for some big tech company somewhere,” said Maloney. “And I said, wow, that’s interesting, who did you think were the best students in your class? He started naming people, and I was like, alright, where did they go? Almost every one of them is working for a local technology company or they’re working for larger companies that now have presences here, but that sound bite hasn’t changed yet. But there are very bright students who are choosing to stay, even though they could go elsewhere, stay where they want to build a community, they want to contribute. We just need to change that sound bite a bit, but that’s doable.”

What can we do to support the start-up ecosystem in Oklahoma City?

Meacham agreed. “Get involved. Be a customer. Be willing to be a beta trial for a new product. Be a strategic investor. There’s companies out there launching products that could be advantageous to your business. Be a mentor. Everybody has something to offer. You may not understand a platform that’s for marketing on Pinterest, but you know a lot about business, just show these companies the love. It’s the community support they get here. In other markets they’re this little tiny fish in this huge massive ocean. Here, people notice. They wrap their arms around them and they want them to be a success. So, just get engaged.”

And THAT, is how Oklahoma City will surpass Austin – yes, Austin, Texas – in the next 15 years. Or sooner!