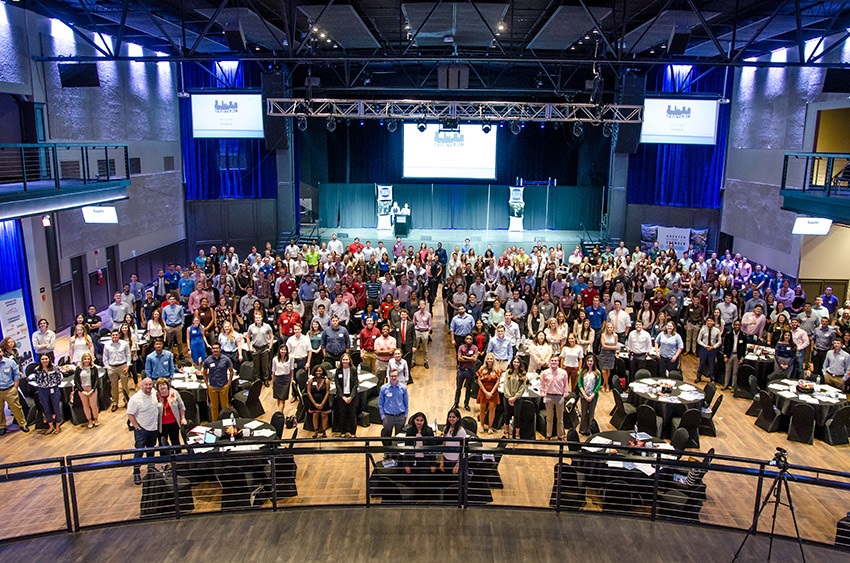 The main driver of economic success for cities in the near future is said to be “access to talent.” Since 2006, the Chamber’s Greater Grads program has focused on recruiting and retaining the young talent in our community that will continue to move OKC forward in the future. A big component of our efforts is InternOKC, the Chamber’s annual summer program where more than 300 interns from across OKC come together to learn from some of OKC’s best and brightest leaders and entrepreneurs about themselves, others, and what it takes to succeed in one of America’s fastest-growing cities (and maybe a few reasons why they should stay in OKC after graduation).

InternOKC kicked in the middle of June at the Chevy Bricktown Events Center. More than 300 interns across OKC came, ate cheese cubes, and listened to Kristen Partridge, Beth Shortt, and Mayor Holt speak about everything from the NBA to the benefits of working in OKC. Perhaps the most thought provoking segment of the day is learning what kind of animal they are from Kristen
Partridge. In an exercise that was referenced in both of the other sessions, interns learned (based on a quick personality evaluation test) what animals symbolize their personality best: Lions, tortoises, eagles, or koalas (or a mixture of them). Interns left the session with a new sense of self-awareness and optimism for OKC’s bright future.

The second session happened 2 weeks later at the Cox Convention Center. At this session, interns learned more about others from speakers Jerrod Murr, Lyndi Zavy, Ricki Bly, Guillermo “Willy” Morales, and Erika Lucas. Right off the bat this session was noticeably different from the last, not just because of the venue and the theme (and larger volume of cheese cubes), but because it started with a quick networking session. Besides professional skills, networking is, of course, one of the biggest incentives for interns to attend InternOKC; not only do they get to network with other interns (at least some of whom they’ll more than likely be working with in the future) but professionals as well. The speakers at these sessions are always more than accommodating to questions by bright-eyed interns. Many of the speakers also mention where to find them on social media to continue the conversations. In fact, the most effective ways to utilize social media was one of the many topics covered in this session, which focused on learning about others and the most optimal ways you can understand/communicate with them in a professional setting. The importance of hard work, the renaissance OKC is currently experiencing (especially in the biotech/aerospace industries), understanding generational differences, staying hungry for success, and being a willing participant to making progress despite the hardships were also among the discussed topics. About 2 and a half hours later, with minds full of wisdom and stomachs full of cheese cubes, the second InternOKC session ended on positive notes about perseverance.

The interns gathered for the last time on July 10, back in the Cox Convention Center. To celebrate the final session, the usual cheese cubes that were available were upgraded to chips and queso (an upgrade everyone seemed to appreciate). Several members of the Chamber staff happily noted while waiting for the event to start is that most of the interns weren’t sitting down—they were up and about, networking and learning from each other. Business cards were being passed, social media information was being exchanged. Indeed, it was truly a sight that would make any potential employers proud. In fact, it wasn’t until InternOKC’s hosts—Kelli Dupuy and Sheena Karami—took to the podium that interns finally went back to their tables. After watching a video about this year’s InternOKC that was filmed across the other 2 sessions, the focus of this final session was to get the interns thinking about their futures. Speakers Brian Bergman, Michael Shellabarger, Teresa Rose Crook, and Jennifer Fogg talked with them about the importance of prioritizing and time management (eating their frogs, as it was called), the importance of good leadership and knowing what sets you apart, and the importance of experience. Perhaps the most inspiring words from this session came from Jennifer Fogg, President of TBS Factoring Service, LLC who shared many eye opening insights about what it’s like to be an entrepreneurial leader in OKC and how others could work toward getting there. OKC’s interns are hungry for more than cheese cubes and queso, after all. They’re hungry for success and they’re on the right track toward achieving it.