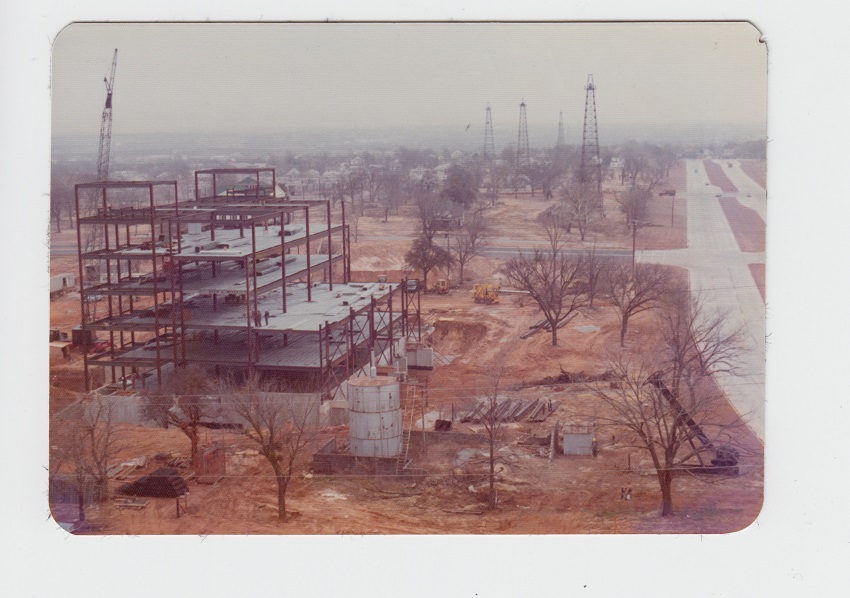 Forty-four years ago, a small group of prominent Oklahoma City citizens, led by ophthalmologist Richard A. Clay, MD, founded the Oklahoma Eye Foundation. The group had a goal of establishing an eye institute while creating a center of excellence to train ophthalmologists and conduct vision research.

The $2.2 million installation was constructed largely through contributions of the late Dean A. McGee, then-chairman of the board of Kerr-McGee Corporation, while Lions Clubs members pledged $350,000.

More than 200 people gathered at the front entrance of the building, a 70,000-square-foot facility located at NE 11th St. and Lincoln Blvd., for the official dedication. There, they heard then-University of Oklahoma President Dr. Paul Sharp hail the institute as being devoted “to medical excellence and the service of people.” Sharp also welcomed the institute to the OU Health Services Center “family” and said that the institute was unique for three reasons; it is independent, community sponsored and university affiliated.

A second, 78,000-square-foot pavilion was dedicated in September 2011 to further advance the institute’s missions of patient care, education, vision research, leadership and service. The additional building doubled the space for research laboratories, expanded clinical capacity by 40 percent, and consolidated all the clinical care, vision research, teaching and administrative functions into one location.

The $46 million building increased Oklahoma’s visibility and made it more competitive in the grab for research dollars, said an ophthalmology leader in an interview with local media.

“This will be the newest eye institute building in America. It will give the Dean McGee Eye Institute closing in on 200,000 square feet of space, making it also one of the largest in the country,” said David Parke II, chief executive and executive vice president of the American Academy of Ophthalmology.

“And, quite frankly, the rest of the country doesn’t expect to find that sort of thing in Oklahoma. They expect to see it at Johns Hopkins or Harvard ... but to have it in Oklahoma is a tremendous feather in the entire state’s cap.”

During the dedication ceremony for the new building, Dr. Paul Sieving, director of the National Eye Institute, described the Dean McGee Eye Institute as a “national treasure.” In providing about 150,000 patient visits each year from all 77 Oklahoma counties and the surrounding states, the institute is one of the largest and most respected such centers in the country. 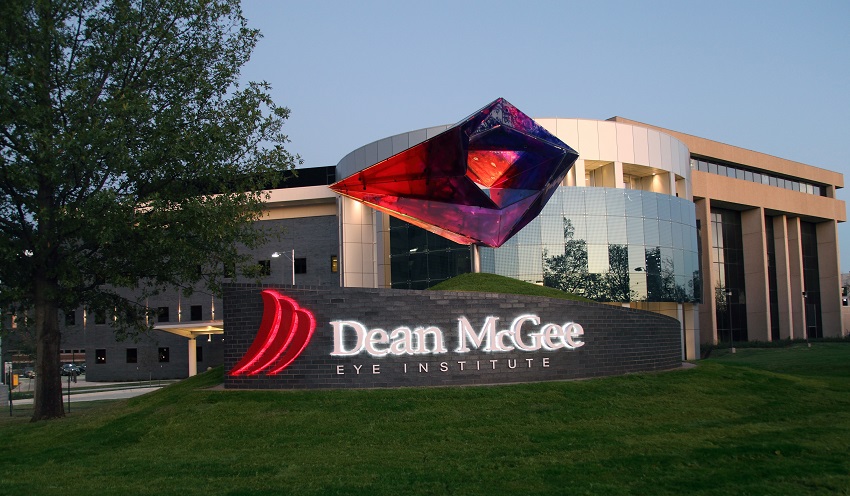 Dean McGee houses the University of Oklahoma College of Medicine’s Department of Ophthalmology, ranked among the top departments in the nation in National Institutes of Health funding for vision research and 10th in the country in cumulative funding from Research to Prevent Blindness. Residency and fellowship programs of the institute and the OU department are highly competitive and respected.

The Dean McGee Eye Institute attracts some of the brightest minds in the profession, including award-winning scientists who conduct groundbreaking vision research and outstanding clinicians and surgeons, many of whom are national leaders.

Advances in glaucoma surgery and the treatment of macular degeneration and tumors affecting the eye are among the innovations taking place at the Dean McGee Eye Institute.

Surgeons at Dean McGee are using a combination of technologies to increase the precision, accuracy and success of cataract surgery. One of the most recent technological developments is an increasing use of the femtosecond laser, which can precisely perform some of the critical steps in cataract surgery.

Several years ago, Dean McGee recruited an ocular oncologist, Dr. Brian Firestone, allowing the institute to increase its ability to care for patients with various cancers of the eye, including ocular melanomas. Firestone works closely with staff at the Stephenson Cancer Center.

The institute has other doctors who are adept at treating tumors of the eyelid and of the orbit, which includes the tissues around the eye.

Glaucoma surgeons at Dean McGee offer minimally invasive glaucoma surgical techniques, such as canaloplasty and the iStent, which make them national leaders in terms of offering the latest advances in glaucoma procedures. Those techniques carry fewer risks than traditional glaucoma surgery and often allow patients to reduce their dependence on medications.

Doctors at the institute have also participated in a study that will help to develop broader methods of screening for premature infants with the potential for developing a potentially blinding eye disorder called retinopathy of prematurity.

Retinopathy of prematurity primarily affects premature infants who weigh about 2 ¾ pounds or less and are born before 31 weeks of gestation, according to the National Eye Institute.

As part of the study, nurses in neonatal intensive care units were trained to use a special camera to take pictures of babies’ eyes. The photos were sent to an image reading center for evaluation, where people who were trained to recognize signs of retinopathy of prematurity identified when infants should be referred to an ophthalmologist for evaluation and potential treatment. Their evaluations were compared to those of ophthalmologists.

The study showed that telemedicine could be used to aid in early detection of the eye disease in premature babies.

Another innovation relates to treatment of age-related macular degeneration, or AMD, a leading cause of legal blindness in elderly patients. Years ago there were no useful treatments for people with the “wet form” of macular degeneration, which generally is caused by abnormal blood vessels that leak fluid or blood into the part of the retina that is responsible for central vision.

Now, doctors are able to use anti-Vascular Endothelial Growth Factor agents, or anti-VEGF agents, which have had a “transformational impact” on the treatment of AMD. Doctors administer the agents directly into a person’s eye through an injection, thus reducing the risk for the wet form of AMD to progress to a blinding condition. The agents have had a remarkable impact on the preservation of vision and prevention of blindness from AMD.

Not only does the institute seek to provide innovation to its patients and to all Oklahomans, but it also strives to provide leadership and service to the profession as a whole, which ultimately benefits patients.

All of this has become possible because, 44 years ago, forward-thinking Oklahoma City leaders very much like today’s leaders created and literally built upon an extraordinary vision for our future.