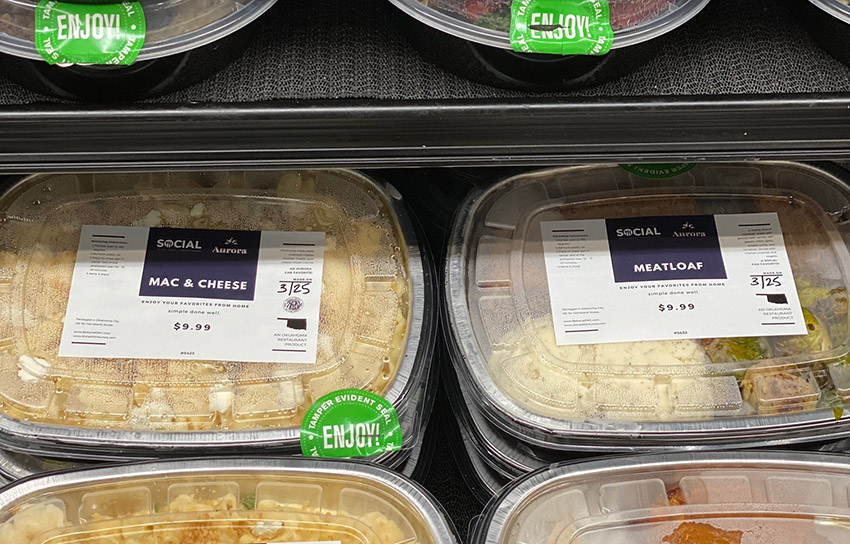 Some of Oklahoma City’s favorite dishes, including Rococo’s crab cakes, are now available at Homeland stores.

As grocery stores have been slammed with customers, restaurants and other eateries were forced to close their dining rooms, cutting their revenue.

“We looked around at the restaurants near us, where we all like to eat and thought, ‘What can we do to help our community?,’” said Marc Jones, Homeland CEO and president. “We just felt like this was the right thing to do.”

And that small action – giving space in a deli case – has rippled through the city.

Restaurant owners Jamie Winteroth and her husband, Jordan Winteroth, operate the breakfast eatery, Aurora, in Oklahoma City’s Plaza District and Social Deck + Dining in the central part of the city. Jones knew the Winteroth’s Aurora operating partner, Dallas Cody Barnett, through their children’s school. He reached out to the operators and then the hustle began.

“We took a day to wrap our head around it, then made a big food order, called our marketing guy to get labels made and within a day-and-a-half, we had almost 200 packages in five Homeland locations,” she said.

Getting the food out the door for the Winteroths meant calling back some of the Aurora staff. The couple had closed the restaurant’s doors so their employees could file for unemployment. Social was down to a volunteer skeleton crew to work in the kitchen and help get food to customers curbside. The Winteroths have also hired back the eatery’s baker, who will work part-time to put the restaurant’s cinnamon rolls in Homeland.

The restaurants are excited to be a part of it not only because it keeps their kitchens operating, but there’s some revenue coming in as well. Homeland is letting them keep all the money from the sales of their items. For Winteroth, that money has gone into paychecks for the employees she’s hired back and into buying the food.

“As long as the restaurants want to do it, we’re happy to work with them,” said Jones.

The products are labeled with the restaurant’s brands, which was especially important for the Winteroths, who had taken over Aurora’s operations only in the last few months. The team was ramping up to improve the restaurant space, even looking at offering live music, when it had to close its doors because of the COVID-19 outbreak.

“Mostly what we’re trying to do is make sure the restaurant doesn’t die in this process,” she said. “So having Aurora’s name on the products with Social lets people know that we plan on coming back. Hopefully when it’s time to reopen, it’s even easier.”

While getting into the stores was a rush for the restaurateurs, Homeland already had some practice in working with outside meal producers through its relationship with i2U Culinary Solutions. The chef-driven meal-prep company works with hospitals to get diet-specific meals to patients when they transition back to their home.

At Homeland, the pharmacies were working with i2U and helping patients get healthier diet recommendations following a blood test. Homeland’s Deli and Bakery Director Chris Rogers let i2U start selling the meals in the stores in February. There are five regular dishes, one rotating option and snacks available in the four stores in the Oklahoma City area.

That was all going well, with meals being cooked at i2U’s headquarters then delivered daily to the restaurants.

But the relationship paid off in the last few weeks as grocery store shelves were cleared of bread. Rogers inquired about i2U’s capabilities and the company stepped up, now delivering 500 loaves to stores across the metro, from Norman to Edmond.

“We’re marketing this as helping a local business, which I know is something customers are really trying to do right now,” said Brent Wilson, dietician with i2U.

The company’s motto, “Food is medicine,” is still coming into play, Wilson said, with their bread being made with the simplest ingredients.

“We know that bread can get a bad rap,” he said. “But we have to remember that food can be nourishing to the soul as well.”

Jones said i2U coming through with bread is one example of how a local supply chain is important. Selling local was always something they were proud to do. Now, those locally-developed relationships have helped keep his shelves stocked, whether it’s from restaurants or a flour mill. He’s been working with restaurant food distributors to get their products out as well.

“This experience has really brought out a lot of creativity,” he said. “While we’d certainly trade it all for the world we had four weeks ago, the small silver lining has been seeing all these Oklahomans working together.”