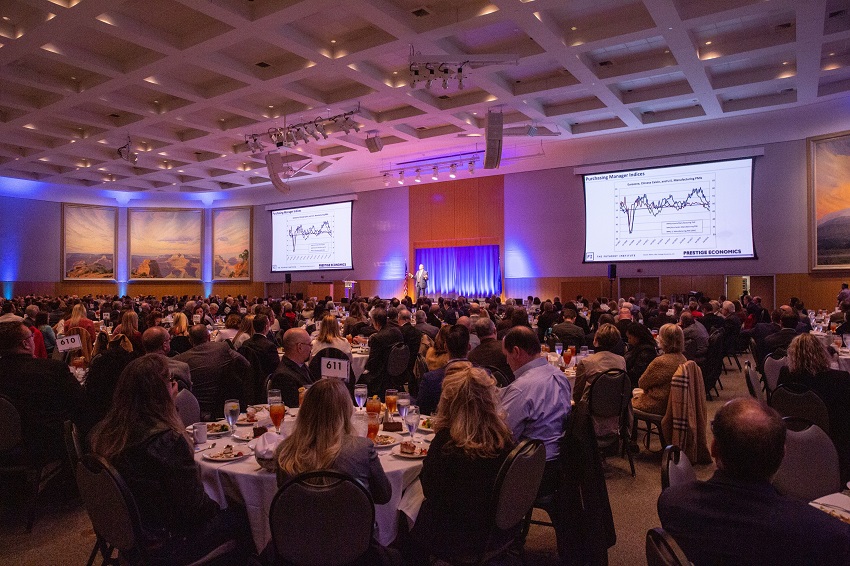 At the recent annual State of the Economy event, a panel of economists told more than 650 Oklahoma City business leaders that the community continues to benefit from public and private investments brought in by a series of MAPS initiatives.

While Oklahoma City residents so far have approved initiatives that have raised about $1.8 billion and Dec. 10 will vote on another MAPS package that would raise about another billion dollars, Greater Oklahoma City Chair Percy Kirk said estimates put total public and private investment so far into Oklahoma City’s downtown area since 1993 at nearly $7 billion.

Robert Dauffenbach, director of the Center for Economic and Management Research at the University of Oklahoma's Price College of Business, called Oklahoma City’s economic progress over the past years nothing short of tremendous.

He observed that Oklahoma City has gained 75,000 jobs over the past 10 years, boosting its employment numbers by 13 percent and increasing its share of real income in Oklahoma from 33 to 38 percent, adding that each percentage point real income shift represented $1.8 billion in value.

Mark Snead, president of the economic research firm RegionTrack, said that property values in the city’s core have doubled since the initial MAPS initiative was approved.

“All of the things we hoped for in creating this place to live, work and play are all gelling,” he said.

Russell Evans, executive director of Oklahoma City University’s Steven C. Agee Economic Research and Policy Institute, said he is most struck by how conversations about Oklahoma City’s future have changed over time.

“It is encouraging to see these types of conversations in our community,” he said.

During the keynote presentation, Jason Schenker, president of Prestige Economics and chairman of The Futurist Institute, discussed whether a national recession is likely soon.

Schenker said debt is at record levels, but most of the recent debt growth has involved loans for students pursuing educations and people buying cars.

On the question of a recession, while Schenker agreed data shows that Europe, China and the U.S. are in manufacturing downturn, he added that doesn’t mean the U.S. economy is headed for a fall.

“With the lowest unemployment rate in 50 years, it is understandable that if we have a good jobs market, that means people have more money … and tend to buy more stuff. That’s important,” he said.

The local economists tended to agree that while the state’s economy may slow, they don’t see a full-scale recession.

“2020 is going to depend on where oil and gas prices go,” said Snead. If oil and gas process moderate and rise back up a little bit, I think we will resume growth without ever noticing this slow patch.”

Dauffenbach said that there are some economic trouble spots and even though he puts the possibilities of a large-scale economic slowdown at about 25 percent, he doesn’t see a recession on the horizon.

Evans thinks that 2020 will be similar to 2015 in the state. “The national economic growth rate slowed from 2.5 to 1.5 percent in 2015, and I think that’s likely for 2020,” he said. “I think there’s a good chance Oklahoma experiences a mild contraction the first half of next year.”