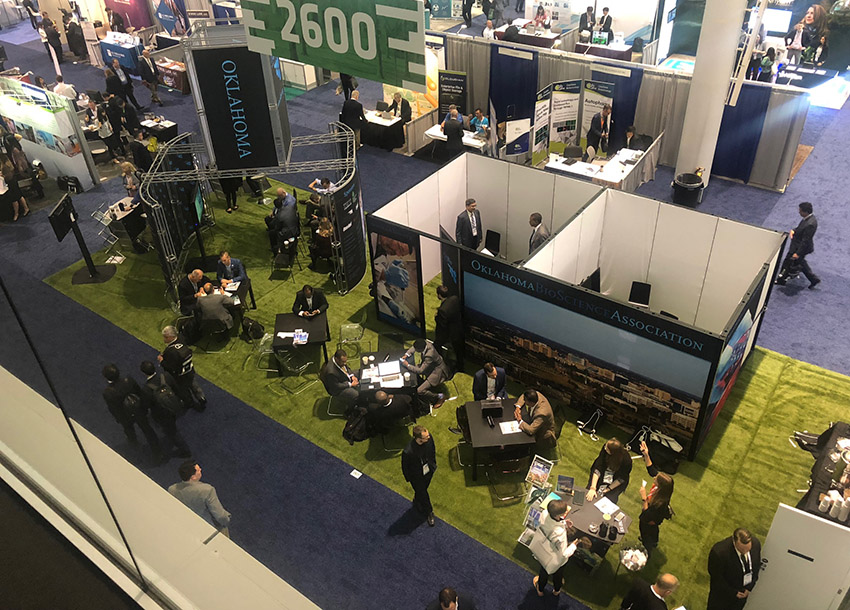 BOSTON — It was the ultimate compliment paid to the group representing Oklahoma at the BIO 2018 convention at the Boston Convention Center.

A representative with Thermo Fisher Scientific had just concluded a one-on-one partnering meeting Wednesday with James Tomasek, Ph.D., vice president for research at the University of Oklahoma Health Sciences Center, when he glanced across the busy Oklahoma exhibition space.

“You guys have an impressive presence here,” he said.

That assessment was just what Oklahomans like Tomasek and others in the OKBio group wanted to hear this week.

Scientists and company representatives from around the world have flocked to the Oklahoma exhibition space for multiple one-on-one partnering meetings throughout each day.

Those meetings here at the BIO show are critical for showcasing Oklahoma's technologies and capabilities to the world, Tomasek said.

“Without this kind of environment, it's very difficult to do that,” he said. “Without this, being able to come to BIO, it would be difficult for us to make the number of contacts that we do for our technologies."

OU's Office of Technology Development has stepped up its schedule of partnering meetings at the show, Tomasek said. It has a portfolio of technologies and fledgling businesses that it wants to showcase to the world.

James Johnson, project manager for the Oklahoma Department of Commerce, said the focus of the Oklahoma delegation at the BIO show has evolved over the past few years.

“I think it's moved more toward those one-on-one meetings that are at the core of real substance in terms of ‘what is the core competency that you have and how can I exchange that for the betterment of my company and my research that I'm doing?'” Johnson said. “The meeting rooms have been kept very, very busy.”

Kupiec and Evan Fay, manager of innovation and entrepreneurship with the Greater OKC Chamber, spent an hour discussing the potential to bring manufacturing and distribution to Oklahoma City of a Spanish company called Era7 Bioinformatics. The company makes “next generation” sequencing technologies.

Next steps in the process, Fay said, would be a potential visit to Oklahoma by company representatives.

“They could sell their sequencing kits to researchers throughout the United States,” Fay said. “They want to do it somewhere where the cost makes sense for them. It's a lot cheaper to do business in Oklahoma, obviously, than on the east or west coasts.”

Kupiec credited the OKBio group for making the meeting happen.

“It's because of the great work that our OKBio Association is doing,” he said. “They helped set up and facilitate this meeting.”

“The partnering is the key here,” he said. “Being able to talk to potential investors. The companies are in trial stage (and) being able to move those trials forward is just critical.”

Read the original article and see photos at oklahoman.com.