OKC is a big selling point for paddle sports show 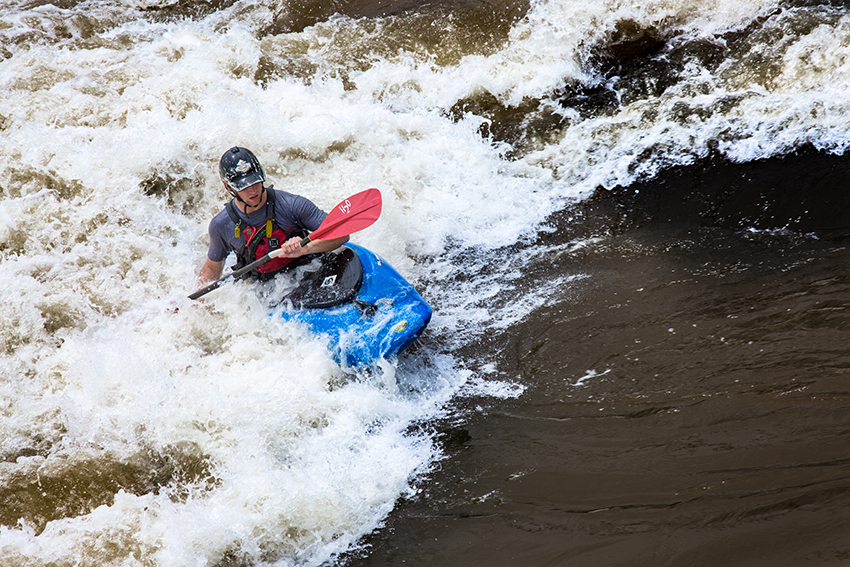 OKLAHOMA CITY – As the sun was starting to bring light to downtown on Tuesday morning, a group of about 16 paddle sport retailers and media representatives walked over to the Bricktown Canal.

On the short walk over, the group was chatting about Monday night. Kayaks of all shapes and sizes, along with other watercraft, were tested and showcased on the Riversport Rapids.

With wide eyes, the visitors talked about the attraction with surprise and awe. They never expected to find this in Oklahoma City.

The visitors were in town for the Paddlesports Retailer show. This is the second year paddle sport manufacturers have had their own event after starting at the Outdoor Retailer show. Most people arrived Sunday, and the retail trade show finishes Thursday.

For most of the Tuesday group, it was the first time they had been to Oklahoma City. Maine-based Johnson Outdoors Watercraft was hosting a float on the Bricktown Canal, where the group would get to try the Old Town line of kayaks and paddle boats.

Oklahoma City Convention and Visitors Bureau Director of Sports Business Sue Hollenbeck told the Tuesday group how and why all the waterways came to be. She described the Metropolitan Area Projects sales-tax plan and how it was designed to fund projects that would improve quality of life.

While getting a trade show tied to water may have been in the dream, it wasn’t a specific goal, she said. She worked for The Boathouse Foundation when the first boathouse was opened. In 2006, the whitewater facility wasn’t on the city’s radar either. It would come with MAPS 3.

“People just loved the whitewater park,” said Dave Lindo, owner of Oklahoma Kayak. “Never before has there been a moving-water component to the show. Flat water is easy to come by. But moving water in an urban environment, that is way, way cool.”

Lindo was part of the group that kayaked or took paddle boats down the canal on Tuesday. While on the float, people slowed down to hear the history of the city, or took pictures with the Land Run monument. They asked questions about the Land Run and the Native American tribes.

After Tuesday’s float, Johnson Outdoors Watercraft brand manager Ryan Lilly said he was scratching his head when he heard the show was coming to Oklahoma City. Then, he did some research and found the whitewater center.

“It all makes perfect sense,” he said. “(Riversport Rapids) was awesome. It was intense. I’ve never whitewater kayaked before, so that was really exciting.”

Lindo can understand the hesitation about having the show in Oklahoma City. He heard the same disbelief when he told people he was going to open a kayak store in landlocked Oklahoma. That was 15 years ago. Now he has two stores and the claim to being among the top in sales for most vendors.

OKC Kayak carries more than 30 kayak brands, where other small stores likely carry only a few because they’re in larger cities where brand territories come into play. Lindo doesn’t have to worry about that.

He attended the Outdoor Retailer trade show for about 10 years before the paddle sport show started. He said the first time he went, it was overwhelming. A lot of the brands were not specific to his business. Outdoor Retailer features everything needed for outdoor adventures, from ropes to tents and everything in between.

When the paddle sport retailers broke off to their own show, he has had more efficient trips. Last year, the show was in Madison, Wis., where show co-founder Darren Bush lives. Co-founder Sutton Bacon is from Asheville, North Carolina.

Lindo said an audible groan was heard in the room when it was announced the show would move to Oklahoma City in 2018.

Langford Canoe manufacturing representative Steve MacAllister, based in Ontario, Canada, said at the trade show that he questioned the move. There’s not a store in the state that carries his high-end wooden canoes.

But that’s not the reason he came to the city. The show offers manufacturers a chance to get their 2019 items in front of big name retailers, such as REI and Academy Sports + Outdoors.

MacAllister said he had been receiving text messages from friends, asking him questions about Oklahoma.

“There’s nothing better for this type of show,” he said. “Anywhere else you go is so busy and chaotic. It’s very easy to get around.”

In the middle of the show floor, the Pau Hana Surf Supply booth stood out among booths that had more of a woodsy look. Surf boards were stacked against what looked like the side of a surf shack. The company is based in Santa Clarita, Calif.

The brightly colored boards are used in stand-up paddle boarding.

Owner Todd Caranto and sales director Molly Sommer said their first thought about coming to the city was food. They were looking for good barbecue.

Caranto said he and his team took a team of four people down the rapids and ended up with two people at the end.

“I didn’t expect it to be that intense,” he said.

He said the show is only going to get bigger – likely double or triple in size – especially after industry leaders hear back from this year’s attendees about the city.

“This will have long-lasting effects,” she said. “The vast majority of them had not been to Oklahoma City, and they’ve been blown away. With the manufacturers being here and the buyers being here, they’ll go back home and tell everyone about their experience. That’s the value in something like this.”

Read the original article at journalrecord.com.