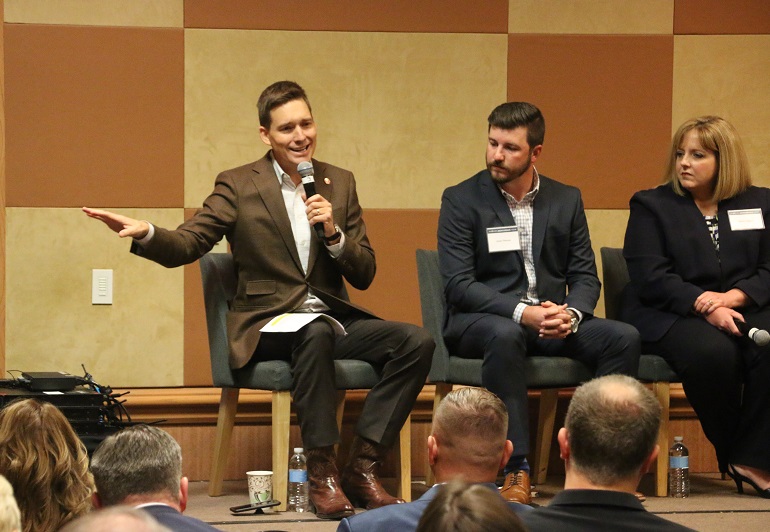 Did you know that aerospace is Oklahoma’s second-largest (and fastest-growing) economic sector? Did you know that greater Oklahoma City has more than 230 aerospace firms, more than 36,000 workers, and a $4.9 billion impact on the economy in goods and services produced?

You didn’t know that? Well, neither do many others, especially those from other parts of the country. When you think of aerospace you likely think of California, Washington, Kansas or Florida. And that’s exactly the topic Oklahoma Lt Gov. Matt Pinnell and a panel from the aviation industry in Oklahoma addressed at the recent Oklahoma Aerospace Forum.

The lieutenant governor said that if there is something in the aerospace industry that needs to be done differently, pertaining to private sector job growth, there has never been a better time for that to happen.

“We can fix it pretty quickly at the state capitol,” he said. “For example, the Greater Oklahoma City Chamber recognized that we need more software engineers and mechanical engineers in the state of Oklahoma. They came to us with an idea to put a tax credit in place to lure those types of engineers to Oklahoma and we got that done very quickly.”

Panelist Jason Thomas, HR senior manager for Boeing, says that they have used employees who have relocated from other Boeing facilities to “sell” Oklahoma City to potential hires now working in other sectors.

“We call it ‘conversion’, moving personnel here from Wichita, Long Beach, the Puget Sound area, and Oklahoma has welcomed them,” he said. “They have become sold on Oklahoma City and they are now our advocate for others around the country who have the aerospace talent across the nation that we need.”

“What can we do to attract more businesses and support the businesses we have?” asked panelist Alexis Higgens, CEO of the Tulsa Airport Authority. “Due to the major economic impact of companies located on our airport, we have a vested interest in their success. We need to help them grow.”

The panel shared examples of what is working for them, helping to attract and retain workforce. They agreed that a STEM-educated workforce pool, quality of life and professional development were essential to the continued growth of the aerospace sector.

“We’ve had success by bringing people to Oklahoma,” said Higgens. “People have an image of what Oklahoma is, but once they come and see our cities, they are just blown away.”

“If you Google Boeing Oklahoma City video, first thing that pops up is something we did about seven months ago,” said Thomas. “I think it’ll give you chills, if you’re an Oklahoman.”

Thomas also advocated developing partnerships and thinking outside the box.

“Partnerships with groups like the Greater OKC Chamber are vital,” said Jason Thomas of Boeing. “They just did the Elevate Conference, a full day of professional development. You get people to Oklahoma and we can send you there (to Elevate) and not send you all over the country for professional development and that’s cost-effective for the company.”

“Your employees and potential employees, people who have moved here, can experience and learn about the things that they can see and do in OKC,” he said. “It provides a networking opportunity and helps to make them a part of the Oklahoma family.”

Pinnell said that the state will be holding events to showcase all 77 Oklahoma counties.

“We can get them here, we pass the eye test,” he said. “But you have to invite people for them to come, to a state or to a city. We see this in all sectors and it works. State government, particularly the departments of commerce and tourism, has a role in creating these events to bring in that talent and to show them our 77 counties and give them a reason to come to Oklahoma. We will prove that Oklahoma is a great place to bring your company.”