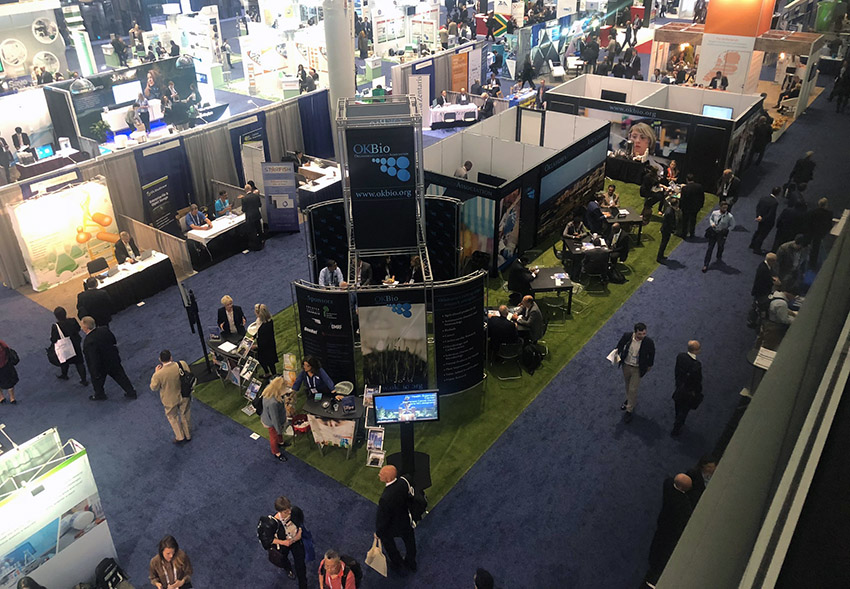 “Oklahoma is fast becoming a breeding ground for the bioscience industry,” said Roy H. Williams, CCE, president and CEO of the Greater Oklahoma City Chamber. “There is groundbreaking research being conducted in Oklahoma City and, alongside the opportunities for collaboration and investment, our bioscience community stands head and shoulders above many locations across the nation.”

Members of the delegation hosted 250 meetings with prospective business partners at the OKBio booth. They were also able to share some of Oklahoma’s recent bioscience success stories. Read on for a recap of how companies are advancing bioscience research in the region.

Scientists at OMRF have discovered a way in which cells duplicate themselves accurately and completely. The new findings provide a better understanding of how cells replicate, and it could help outline how and why this process goes wrong in cancer.

Moleculera Labs, Inc., an autoimmune neurobiology company, issued a key patent covering the company’s Cunningham Panel™ and its use in helping physicians identify whether an individual’s neurologic and/or psychiatric symptoms could be caused by an autoimmune dysfunction. Specifically, the new patent covers methods of diagnosing Pediatric Acute-Onset Neuropsychiatric Syndrome (PANS) and Pediatric Autoimmune Neuropsychiatric Disorder Associated with Streptococci infection (PANDAS). The Cunningham Panel™ can help identify the level of autoimmune antibodies associated with such neuropsychiatric disorders and the capability they have to stimulate and trigger neurologic behavior.

Lead investor i2E, along with Chicago-based OCA Ventures and Mayo Clinic Ventures, has funded the first round of investment to assist Progentec in moving its technology for predicting the onset of lupus flares closer to commercialization. Technology created by the Oklahoma Medical Research Foundation (OMRF) is at the core of the platform being developed by Progentec.

Read more about the NCI designation at www.velocityokc.com/stephenson

Oklahoma’s bioscience sector currently contributes more than $6.7 billion in economic activity and supports more than 51,000 Oklahoma jobs. The sector also produces annual revenues of more than $4.1 billion. OKBio represents more than 500 bioscience-related businesses and organizations across the state and is the voice for Oklahoma’s dynamic and diverse bioscience community.

This article first appeared in the August 2018 edition of The Point!