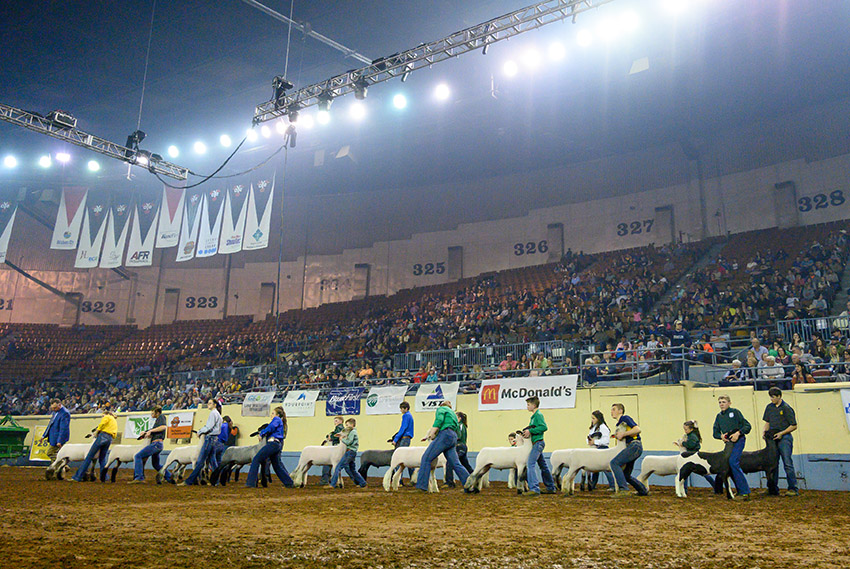 For the past several months, Shaylee Maddox, 16, of Thomas, has been thinking about taking a limo ride.

But it’s not a ride to prom that’s been on her mind. It’s the Grand Drive, where she could ride with other Oklahoma Youth Expo Grand Champions into the Jim Norick Arena to possibly win her Grand Champion trophy.

Maddox is taking five sheep to this year’s Oklahoma Youth Expo, two ewes (females) and two wethers (males). She’ll need them to cooperate if she wants to make it to the limo.

“They look pretty good in my eyes. They actually act good, too,” she said.

Maddox is one of the 7,100 FFA and 4-H students coming to the Oklahoma City Fairgrounds for the state’s largest youth event. There will be more than 22,000 animals (sheep, goats, pigs and cattle) in the barns at the State Fair Park, coming from all 77 counties. Families will move in this week, with competitions starting Wednesday and activities lasting until March 20, when the animals are sold.

This year’s show also includes an agricultural mechanics contest, where students can enter anything from decorative pieces that they’ve built to student-built livestock trailers. 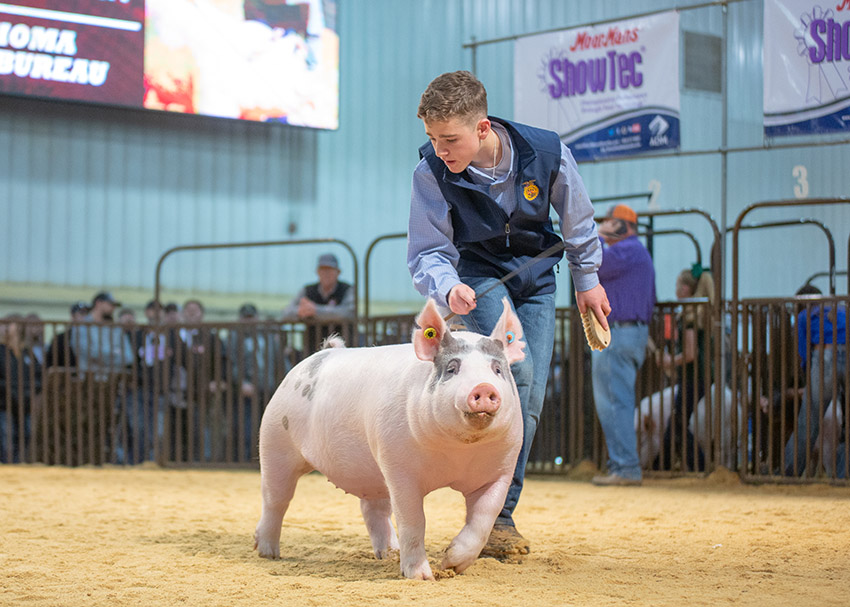 A young man coaches his pig around the show ring during a previous OYE.

The 10-day event is projected to have a $25 million economic impact on Oklahoma City. Yet the even larger effect is felt by the students, who not only walk away with the checks from selling their animals, but with thousands of dollars in scholarship money. Sale money, scholarships and awards are expected to reach about $2 million this year.

One of the buyers in the stands during the sale is Bob Funk, Sr., owner of Express Ranches and co-founder of Express Employment Professionals. At the 2019 show, he said he spent about $85,000 on mostly cattle during the Sale of Champions. He’s bought some pigs and sheep in the past as well.

“I try to support them as much as I can without being too dominant,” he said. “It’s just about helping the kids.”

Funk has been involved with OYE for more than 20 years. Growing up on a dairy farm, he said he sees the values that are learned through agriculture work. Now as someone who’s in the employment business, he’s seen how raising an animal and getting ready for a livestock show can help shape a young person into a good employee.

“It teaches them good work ethic,” he said. “Work ethic is extremely important in today’s market. Agriculture teaches them values. It teaches them to care for an animal and to give to something other than themselves. It’s been a value system that’s been lost in our urban areas. But learning those values when they’re younger is a lasting one and helps them to be successful.”

OYE’s Vice President of Communications JD Rosman said in the five years he’s been involved with the show, he was blown away by how many non-agri-related companies are involved with the show, such as Express Employment. Rosman grew up in Washington, where his family raised and showed Angus cattle, and he said he didn’t see that same kind of financial support at the livestock shows there.

“So many industries (in Oklahoma) see the value of investing in these youth,” he said.

The Oklahoma Energy Resources Board has been one of the show’s larger sponsors for the last five years. Executive Director Mindy Stitt said it was a natural fit for the organization to get involved.

“In Oklahoma, the oil and natural gas industry and agriculture often go hand in hand,” she said. “These hardworking students are some of the best and brightest in the state. The people of Oklahoma oil and natural gas are proud to support programs like the OYE that allow the future leaders and workforce of our state to hone invaluable skills and work ethic.”

Maddox said one of the skills she’s honed from participating in livestock showing is learning how to interact and talk to many different people, even during uncomfortable situations. At the shows, she’s in the barns with people she’ll see in the show rings, so she’s learned how to be competitive with her friends.

Funk said he can understand what it’s like being friends with people you compete against. He still experiences that in the cattle business and the heavy-horse business (Express Ranch raises Clydesdales). Learning how to build relationships with people is important in all aspects of life, he said, whether it’s with someone’s boss or a person’s employees.

“I think agriculture-learned relationships are extremely important,” he said. “That’s why OYE is so important in my mind. You have 7,000 kids that learn relationships and many become lifelong friends. That’s a value system that many people don’t learn when they’re younger.”

Cooper Shebester, 18, of Alex, is coming to OYE with his market steers. He’s been showing since he was nine and taken the infamous limo ride twice. 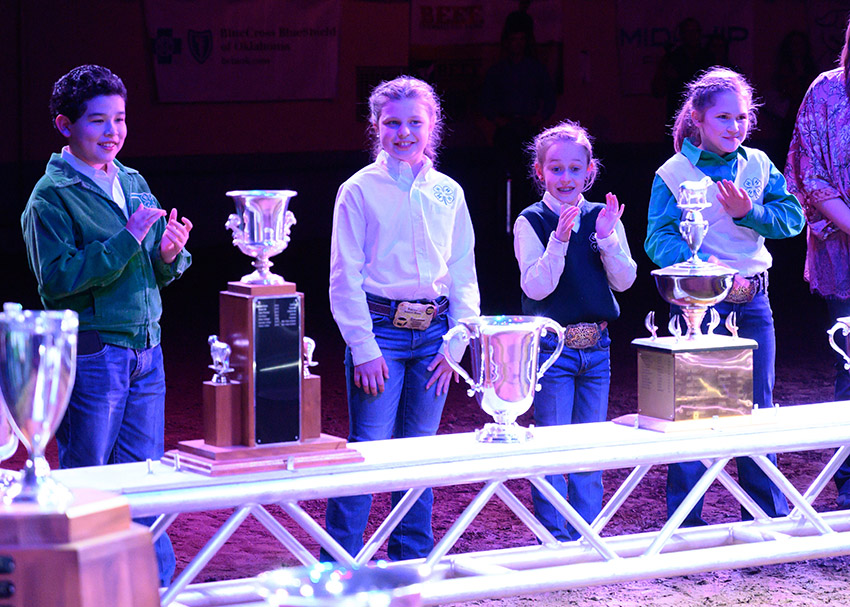 A young girl gleams with excitement as the trophies are lowered from the ceiling at a previous OYE.

To make it into the limo, the students must be among the top of their breed. They could leave the arena with a Grand Champion title or the determination to come back and try again next year.

“When you get out the limo, they play ‘Thunderstruck,’” he said. “They do a lot of stuff to really celebrate us.”

Besides the shiny trophies being lowered from a platform, there’s a pyrotechnics show and a special guest to greet the youth as they enter the arena. At the 2019 show, Oklahoma State University’s Pistol Pete gave high fives as the kids walked in for the final round of showing their animals.

With pyrotechnics and lively music, it’s almost like an athletic event, which is what Shebester said livestock showing was like for him.

“For me, showing steers is an outlet. It’s like a basketball game for a basketball player. It’s relaxing,” he said. “Being in the barn is something I really enjoy. It’s something that allows me to think clearly about whatever’s going on in my life and whatever else is happening at school.”

The high school senior will attend Eastern Oklahoma State College in the fall as a member of the livestock judging team. He said his time as a showman has been one of the biggest impacts on his life.

“With most of us at OYE being in FFA or 4-H, we’ve been really involved in leadership or other activities,” he said. “For most of us, it stuck. It taught us to be a leader to the people around us.”

And it’s those young leaders that will take this state and country into the future, Funk said, which is why he continues to invest in them.