Rural Sourcing Inc. excited to be a part of OKC's tech industry 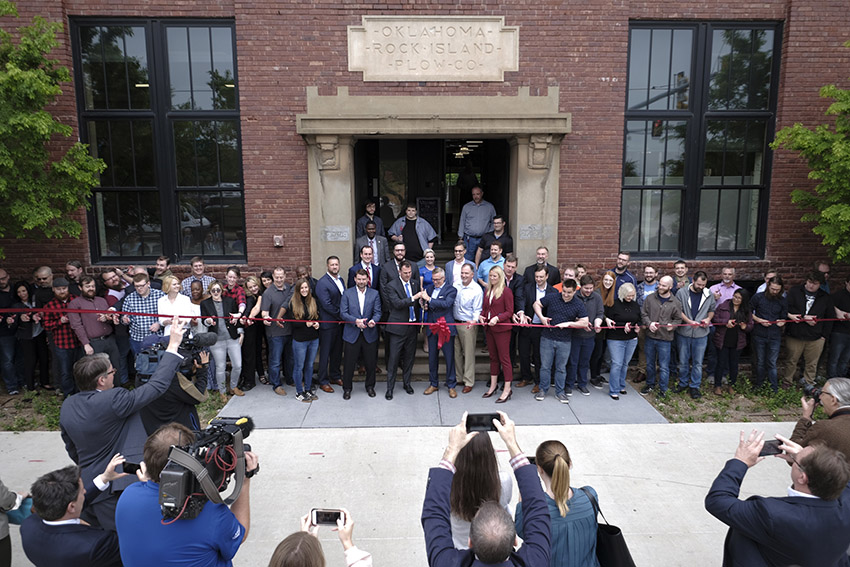 City and state officials, including Gov. Kevin Stitt, celebrate as Rural Sourcing, Inc. cuts the ribbon to officially open its Oklahoma City office. The company is housed in The Plow building in Bricktown.

For Rural Sourcing, Inc., Oklahoma City was a bigger market than its other locations. CEO Monty Hamilton said the company wanted to be sure it could make a positive change here like it’s done in other cities.

“When we go into a city, we want to know we have an impact and can change the technology acumen,” he said. “We want to be a catalyst for increasing the technology wave in Oklahoma City. Once we got our boots on the ground and dug into the place, we felt like we could have that impact by pulling together 150 technology professionals and getting them jazzed up about working together.”

Rural Sourcing builds software solutions for two types of companies: Fortune 1000-size and those businesses that operate on a digital platform.

Rural Sourcing started hiring in Oklahoma City in September 2018. It set up shop in StarSpace46 while it hired its first 150 employees. StarSpace46 is a technology and entrepreneurship coworking center in west downtown. Being there turned out to be quite helpful.

“By being in the central nucleus of the technology hub, it gave us access to Techlahoma,” he said.

Techlahoma is a network of more than 4,000 information technology workers, hobbyists, students and teachers housed at Starspace46.

“Being in StarSpace46 gave us some street cred right off the bat,” Hamilton said. “That was beneficial. We have since added this consideration to our list of startup best practices.”

Rural Sourcing is now housed in The Rock Island Plow building in Bricktown, following the company’s goal to operate in a historic building. The building had recently been renovated by owner Richard McKown, who used Allford Hall Monaghan Morris architecture firm to design the update.

Besides the historic space, Hamilton said another attractive point for Oklahoma City was the MAPS projects. Since the Metropolitan Area Projects sales tax initiative funds many quality-of-life improvements, it helps build a culture and climate where tech professionals want to come and stay.

About 10% of the new hires in Oklahoma City came from other parts of the country. Otherwise, Rural Sourcing was able to find the talent it needed right here. The company plans to focus on its community impact by reaching out to elementary, middle and high school students and have them visit the office to see what it’s like to work in the tech industry.

Rural Sourcing is also focused on diversifying the tech industry, which isn’t just a problem in Oklahoma. By being intentional about diversity and inclusion we will improve the overall culture and capabilities of our company. This inclusion is especially important when it comes to showing the office to students.

“It’s very, very impactful to have someone walk through our door, see someone that looks like them doing this job and having a good time at it,” he said. “It truly can be life changing for those folks.”