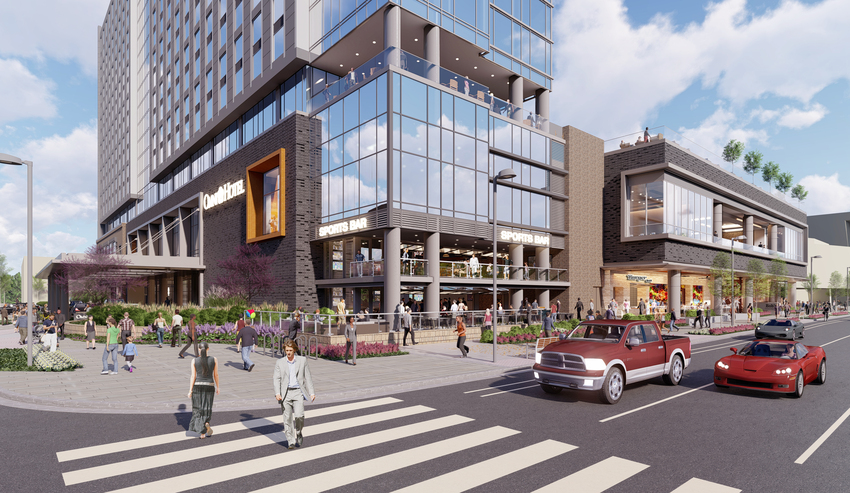 Seventy-five years ago, cowboy Will Parker sang in the Broadway musical “Oklahoma!” that “Everything’s up to date in Kansas City…” Imagine what he would sing about Oklahoma City, should he now leave the ranch in Claremore – where the fictional musical took place – and instead visit OKC!

The visitor and entertainment industry is an $8.6 billion industry in the state of Oklahoma, the third-largest sector in our economy behind only energy and aerospace. In Oklahoma County alone, the industry generates more than $2.2 billion in travel receipts, supporting an employer base of more than 22,000 and a local payroll of more than $525 million. This is a tremendous part of the local economy and a testament to the work of private and public sectors toward delivering a top-notch environment and experience that's attracting visitors from all over the world. That momentum is going to continue as four new critical projects come online in 2020 and shortly thereafter.

MAPS 3 projects and Omni lead off

“We're very excited about this, obviously,” said Carrier. “We should be finished and ready for opening of the building midsummer of 2020, assuming that everything goes according to the plans that we have.”

But it will take a couple of months after that to get everything ready for groups to come in and use the new facility. “Fall of 2020 is probably what we expect in terms of actually opening and being ready for groups,” Carrier added. “We will still be operating the Cox Center until then and will still have a number of events held in there. In fact, we know that there's a large Baptist convention the summer of ‘20 that has said, 'We're going to be in the Cox Center.'”

What about the new park, which borders the Convention Center?

According to Heffernan, it should open next year. “We're working right now on kind of a June soft opening. We will have our cafe running, the boathouse, the fountains, everything will be up and running and we'll be planning a grand opening which will be really spectacular. We hope it's a great big celebration over a number of days. It may be Labor Day weekend or even early October when the weather cools a little bit. You can start to enjoy the park next summer and the grand opening, with everything up and running, and the big celebration in early fall of next year.” 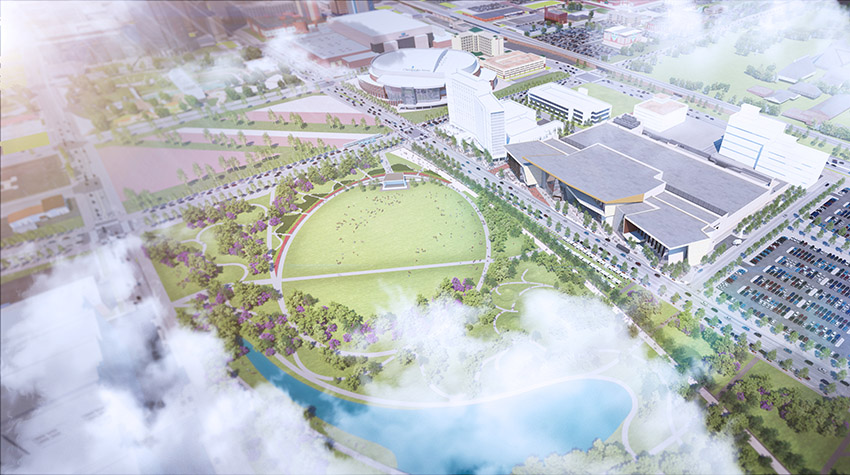 A key piece of the puzzle in creating a synergistic environment for the meeting, lodging and entertainment needs of a large-scale convention is the new Omni Hotel. With ground breaking slated for late August or early September, what can a visitor expect to find at the hotel when it is completed?

Cimorelli said that he and his design team have spent time learning what makes OKC tick and on what the citizens pride themselves. He listed a few things that will make the Omni unique.

On the northwest corner of the building, there will be a two-level sports bar. “I heard you guys like sports a little bit, so we're gonna put a 20 foot big-screen TV in this space,” he said.  “We're hopeful that that really energizes both, kind of a connection point between the park and the arena. Going down the mid-block, continuing down, we're actually gonna have a burger bar between our Bob's Chophouse and sports bar. That burger bar will be kind of a nod to the park, an opportunity for people to come off the park, walk up to a window get a burger. Sit down if you like. Leave if you like. Real quick and easy. And, again, midship of the building on Robinson will be a Bob’s Chop House.” 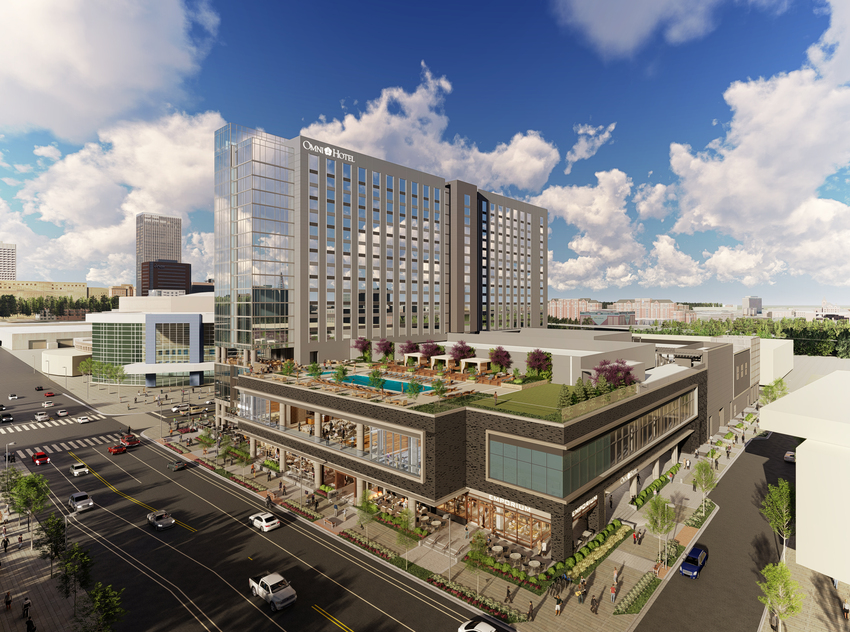 “We haven't decided yet on the coffee shop name, but there will be coffee on the southwest corner. And then, on the pool deck, up on the third floor there'll be a pool bar. Again, open to residents, open to people that want to come in and enjoy great views of the park, great views of downtown.”

Very cool. So what did Omni find so attractive about Oklahoma City that they wanted to open a new hotel?

“It's the energy, it's the uniqueness of the opportunity here. One thing that we really pride ourselves on at Omni is doing something that's different than every other cookie-cutter hotel. I mentioned we want to capture the essence of Oklahoma City, but the energy from the park, from the new Convention Center, we are dead center of all the activity and that is a perfect place to be for us,” Cimorelli added. “It's just an exciting time to be a part of Oklahoma City. We're excited! We've got a groundbreaking, actually, in Boston next week. But, I want to say that this is just as exciting, if not more exciting than what's going on in Boston. So it says a lot for us to be here and we'll continue to develop the relationships and try to be a good partner when we come.”

AICCM finally on its way

Another jewel in OKC’s tourism crown, the Native American Cultural Center and Museum, is back on track, thanks to the Chickasaw Nation and the City of Oklahoma City and lots and lots of private donors. For years, possibilities around the museum have been envisioned, becoming a global attraction, sharing the story of Native Americans and, at the same time, creating jobs and adding to the success around all of the other, new, tourism-related projects.

“The good news is, and the burning question everybody wants to know is, when are we going to open? This project has been going on for nearly 20 years and we're going to open in the spring of 2021, so about 36 months from now,” reported Henry.

Why not sooner? The short answer is, the design is 20 years old and upgrades are being made.

Henry also said there will be a world-class dining experience in the museum, much like the restaurant in the Smithsonian’s National Museum of the American Indian. “We're gonna bring that experience here to Oklahoma City, so that people can, for the first time, really experience traditional foods. When I say traditional, I'm not talking about fried bread and Navajo tacos. I'm talking about foods that are sourced from the tribe’s food. Sovereignty is a big deal right now with the tribes. The Choctaw have the largest cattle ranch in the country. Several tribes now have their own bison herds, so we're gonna source locally. You'll be able to experience great native cuisine.”

Projects to benefit everyone

Will Parker maybe “…didn't have an idea of what the mod'rn world was comin' to…” 75 years ago, but these four leaders certainly have a vision for what OKC will become.

Referring to Scissortail Park, Heffernan said, “We have the opportunity to hopefully start the culture or birth of the DNA of it. A park is such, it can be such an improvement to the quality of life. I mean, it has a spiritual value, a physical value, as it does so many things for the community.”

Henry said he thinks an improvement in overall quality of life will continue to lead to better things for Oklahoma City. “That means great cultural institutions and having the critical mass of things downtown to bring people back into town. But from the perspective of the cultural center, the one of the stories that we're missing, the big piece of the puzzle is the collective histories of all the tribes here in Oklahoma. We can't talk about Oklahoma in our history here, and even our the history of our country, without telling the stories in the histories of our native tribes and, specifically, the 39 tribes that are here in Oklahoma, So I hope that down the road, not only the quality of life part of it, but that there's greater understanding and a better appreciation of our cultures and between cultures 30 years from now. Certainly, our mission is to help to help with the education of our citizens with the rich histories of the cultures that we have right here in Oklahoma.”

While not an Oklahoma City resident, Cimorelli has come to appreciate what OKC has to offer and understands the importance of a vibrant downtown. “We're hoping that what we're doing now, being part of this, spurs the growth. I think there is a vision here.  A lot of people think of it as a flyover city. Well, why not stop here and enjoy what's here? There's so many things that you guys have to offer that the country doesn't know about yet and I see that kind of being spilled out and everything that you guys are doing, so, hopefully that continues to grow.”

Carrier has seen many changes over the 11 years he has lived in Oklahoma City. While he is pleased with all of the exciting things that have happened to energize OKC, he looks to the future and wonders, “Who are the next visionary leaders? Look back 25 years at Ron Norick and the people that sat around and dreamed up MAPS 1, and the people that worked on MAPS 2, which was MAPS for schools, and Mayor Cornett and MAPS 3, which is coming to the end of its life as we speak now, with the projects that are still to be done.”

He had a few words for the business leaders in attendance. “You guys got to step up, because you're the ones that want to make it happen. We can all sit around and dream and throw things against the wall to see what sticks, but you are the ones going to make it happen and going to continue things like the legacy of the Indian Cultural Center and Museum that continue, the Scissortail Park and Myriad Gardens and other great projects like that. We're building a convention center that has space for expansion. You're the ones are going to be looking at, when is it time to expand and what is the expansion, that looks at what are the, what's the next major hotel, you know? Where does it go and how does it service? What are we going to do with the Boathouse District? How do we continue to expand that and keep it vibrant? We go all over the country, preaching about Oklahoma City and when we tell somebody that we have a US Olympic water program here the first thing they do is look at us, like, you know, we're Martians or something. I didn't know, yeah, yeah, we're in the middle of the US, but, what are you doing with a US Olympic Training Center for water sports? Well, why not? What's the next why not? That's the thing that we've all got to continue to do. It’s in your hands as we continue to grow and prosper and move forward.”

There’s your “mod’rn world”, Will Parker.