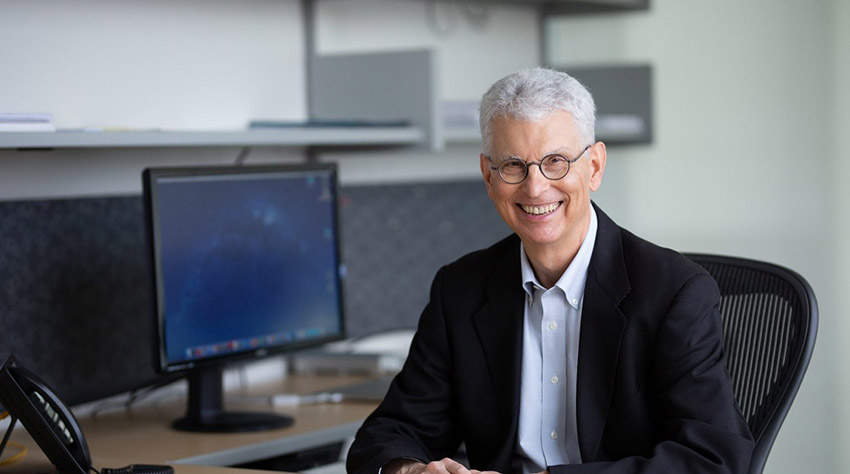 Dr. Rodger McEver sits in his office at the Oklahoma Medical Research Foundation.

Dr. Rodger McEver and his teams at the Oklahoma Medical Research Foundation and Selexys did not set out to create a drug that could be used by sickle cell disease patients.

Rather, McEver was studying a protein that’s connected to white blood cells.

He had been studying that protein, call P-selectin, since the 1980s when he worked at the University of Texas in San Antonio. P-selectin is a protein that’s expressed on the surface of blood platelets that are involved in blood clotting, as well as on cells that line blood vessels. P-selectin only goes to the surface of cells when activated, which happens as a response to an injury, infection or bleeding.

When he moved to Oklahoma City in 1987, he and other researchers dug more into P-selectin.

“We thought this protein we discovered was likely to do something important because it was an early sentinel,” he said. “It got popped to the surface when you needed a protective response or had an infection.”

McEver and his team broke down the protein’s structure to understand the amino acid sequence. The assembly was unusual and it turned out other scientists had learned this about selectins as well. Of the selective family, p-selectin is an early warning system that helps bring white blood cells to the infected or injured place in the body.

“Its purpose is to be protective when you get in trouble,” he said.

In another lab, other investigators were working with sickle cell patients. The disease causes the red blood cells to change shape into a crescent or a “sickle.” Those cells then stack up in the smallest blood vessels in the body, so tissues get too little oxygen. This can also strain organs of oxygen.

“This periodic blockage can create excruciating pain,” McEver said. “So people with sickle cell disease are suffering all the time.”

But McEver and his team knew that when the body sends the pain signal, white blood cells respond. Adding more cells to the mix doesn’t help the problem, especially since the white cells travel with the P-selectin. This causes more blood cells to stack, so the blockage doesn’t go away.

Luckily, McEver and his team had found an antibody that could stop P-selectin from interacting with the white blood cells. This discovery was early in his research at OMRF, but he and his team didn’t know exactly what to do with it.

That is, until they realized the connection with sickle cell disease treatment.

In 2002, McEver formed a private company called Selexys with two other OU Medicine researchers. The company focused on how to block the P-selectin from being released. Selexys was able to raise enough seed capital from Oklahoma investors that it was able to have the antibody made into a drug, then run drug trials in 2012 and 2013. Innovation District neighbor, Cytovance Biologics, created the drug for the trials.

There were 200 patients in the trial from across the U.S. and two from outside the country.

“It was a challenging trial to do,” he said. “Selexys deserves all the credit for all the hard work and rigorous design of the study.”

When the results were revealed, patients who were given the drug saw their number of pain crises – times of extreme pain – reduced by 50%. The results were published in “The New England Journal of Medicine”. Pharmaceutical company Novartis had already invested in the company and had bought the first rights to acquire Selexys if the drug trials worked.

Novartis then took the drug, called Adakveo, through the FDA process. The administration put the drug on the fast track and gave it the seal of approval in November. The actual marketable drug should be available for doctors in 2020. The drug is given monthly intravenously to patients.

McEver said he’s lucky to have been involved with the process from the beginning. Usually the research is passed from scientist to scientist; even more often, the work likely won’t even make it to the point of seeking governmental approval.

But McEver and his partners are not done researching. Whether it’s at OMRF or with the Selexys team, that now operates as Tetherex Pharmaceuticals, McEver is not resting on his laurels.

“One success does not guarantee another,” he said.