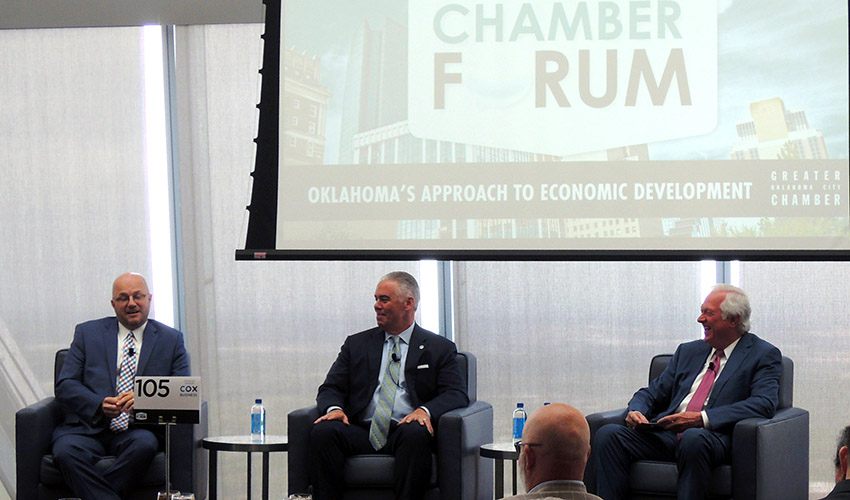 Executive Director of the Oklahoma Dept. Of Commerce Brent Kisling and Oklahoma Secretary of Commerce and Workforce Development Sean Kouplen joined Chamber President Roy Williams to discuss the state's approach to economic development under the new Stitt administration at the April Chamber Forum.

Kouplen said that a restructuring of cabinet roles under new Gov. Kevin Stitt allows him to pursue strategies that will be beneficial in bringing new businesses to Oklahoma while working closely with existing businesses.

”We're going to recruit outside. We have a top-five anti-business list throughout the country that we're going to do guerrilla marketing into and try to steal companies and bring them in, and we want to do that and I love that. But, in reality, there are so many companies that I visit with on a day-to-day basis that have never heard a word from the State of Oklahoma. Never. There just hasn't been this effort toward, hey you're adding jobs, you're adding value, you’re, how can we help you? Let us tell you about the resources we have and we have many. So, I think those are my top priorities.”

“One of our, or maybe our top priority right now is, we have got to have a brand as a state,” he said. Those of you who've owned businesses, are involved in any types of sales of products, you have got to know what your product is before you can ever sell it, before you can send staff out on the road and start telling them to move their company to Oklahoma or even to invest in our state, you've got to have a message first. And we've been through several iterations of that as a state.”

Kisling acknowledged that Oklahoma has had taglines and logos over the years, but Oklahoma has never really stepped back and said what is our promise to the rest of the world?

“What is our brand promise,” he asked. “There's a lot of different directions we could go with that. There's the direction of, well we're lower cost than everybody else. You can make a hundred grand here, it’s just like making two hundred fifty thousand dollars in Orange County. Or you can say, you know, we drive 10 miles in ten minutes in Oklahoma. That's much different than Dallas. That's a great, great message to share. We're quaint. We're an oil and gas state. We’re an Air Force Base state or a military state. We're an agrarian state. We're a high energy state, we're an aggressive state. There's lots of different directions we can go.”

But what will it take for Oklahoma to achieve one of Gov. Stitt’s goals, becoming a top 10 state? Kisling and Kouplen have definite ideas on how that can happen.

“One thing that we have got to do is focus on our existing businesses,” Kisling said. “It's great to bring new companies in and we love to have those employers come in here, but if we're truly going to be a top 10 state we have got to grow all of our existing businesses. We have actually already begun the process of changing some job descriptions at the Department of Commerce, especially with our field staff. We have six staff members that are all around the state that work projects for us. We need them to visit each of these companies, find out what their needs are, be able to have a direct line back to us, back to the governor, in order to solve some of their problems.

“That's one. But another big one is more of a cultural change, I think, for state government and also for the Department of Commerce. And it is this idea that the Department of Commerce does not create jobs. A state government doesn't create jobs. We create an environment where businesses can add jobs. That's our goal. And if you can change the culture to that, then you realize that you truly are, as an organization, a support, a service organization that's there to help.”

Secretary Kouplen expounded on that.

“In a business, you have a finite amount of resources and you have to deploy those in the best way possible,” he said. “You can't spend the money and then go to the legislature and ask for more. That is not an option in business. We're trying to be very, very strategic in how we use our marketing dollars. I mentioned the five anti-business markets that we are going after and I'll just tell you they are California, New York, Washington, Colorado and Michigan. We studied these extensively, we laid them all out, we looked at where they are the worst and our goal is just to create leads for the local communities to land deals. That's our purpose. Instead of just kind of going out there and saying, hey everybody, we want you to come to Oklahoma, we will be more successful if we pick certain industries and focus on those and become experts in aerospace, for example. When you are very deliberate and focused on a particular industry, you infiltrate it, you're at all the conferences, you get to know everybody, you learn the information and who's moving and who's growing. That's our goal in a variety of industries, in our key industries. And we're just beginning this process. But that's going to be a different way that, I think, we will function than in the past.”

Kisling said he thinks Oklahoma is headed in the right direction, starting with a new cabinet position.

“I think, in Governor Stitt’s wisdom, he appointed a secretary of branding. And I don't know that we've ever had one of those in Oklahoma before. And over this next eight, nine months we're going to be discussing branding and, to me, that's going to be important for us. Because we've got 92 people at commerce that we send all around the world. What am I telling them to say? Right now, just saying hey, say nice things about Brent and Sean! And, you know, do your best. They need a better message than that and we're working on it.”