State of the Aerospace Industry - a recap

The challenges faced by aerospace companies working with drones and a comprehensive look at the structure, purpose, opportunities and challenges of the Air Force Sustainment Center were among the topics at this year’s State of the Aerospace Industry event, sponsored by the Greater Oklahoma City Chamber and held at the Reed Conference Center.

While the variety in size and uses for UAVs has grown tremendously in recent years, the standard of safety maintained by the FAA and the time put into keeping it that way has been taken for granted, Grimsley said.

“I think we need to manage our expectations as far as what we’re likely to see,”he said. “Automation is happening in lots of different areas. We’re more likely to see automated cars on the road on a wide scale before we see large-scale drone operations.

“The public has an expectation of very safe airspace. When we bring these new drones and technologies in, we have to start at a very high level of safety.” 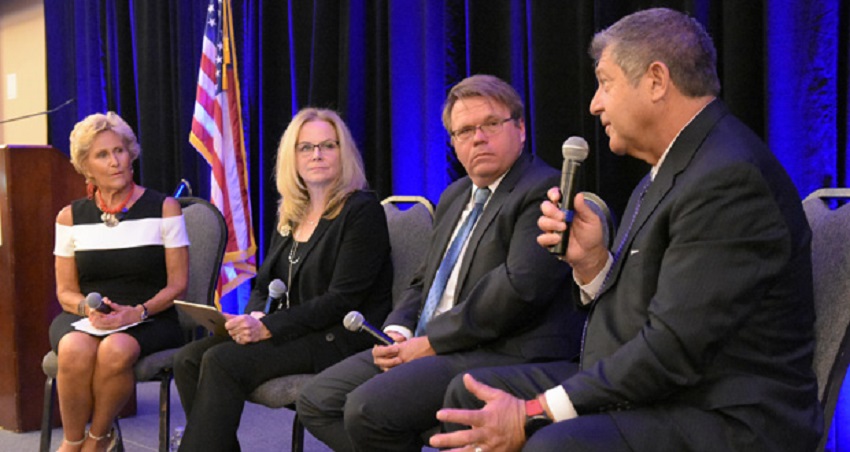 Herro said it is important to understand the complexity involved in integrating unmanned aircraft with manned aircraft like commercial airplanes. Drone testing requires large areas of controlled environments, such as a military base or unpopulated areas, which are currently hard to come by in the U.S.

Herro said the problem with access to the range of airspace needed to properly develop UAVs needs to be addressed to make testing affordable.

“We need to find a way to get access to that airspace a lot more readily,” she said. “That’s going to make our jobs a lot easier and will make us a lot more effective in trying to develop these products.

“There is a lot of work to do in collaboration with industry over the next weeks and months and years. But we will get there … we’ll get there when the time is right and when it’s safe to do it.”

Giles said she understands the frustration that comes from regulations moving slowly, but the FAA is taking its time to do it the right way.

She said the agency is working closely with the industry.

“The airspace belongs to everybody. It’s regulated by the FAA, but we try to be very respectful of that,” Giles said.

A Goldman Sachs study estimates that by next year the market for drones will climb to $100 billion, helped by growing demand from the commercial and civil government sectors. The fastest growth opportunity comes from businesses and civil governments, according to the study.

Air Force Sustainment Center (AFSC) Commander Lt. Gen. Gene Kirkland spoke about the State of the AFSC at the event.

“We are big business,” Kirkland said. “We have over an $11 billion economic impact to our communities. These are big numbers, but it’s really about the readiness it generates.

“Our center’s capabilities and cost-conscious approach are central to our Air Force’s readiness.” 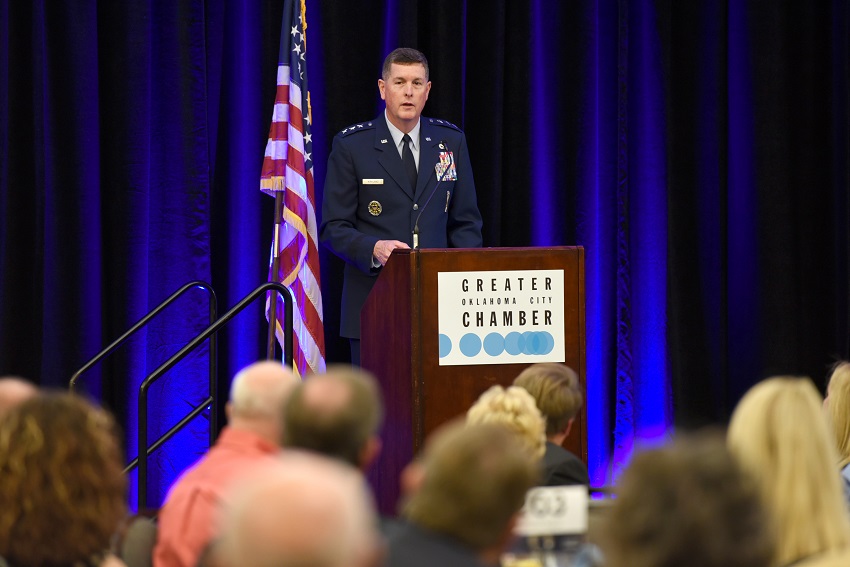 This fiscal year, AFSC has repaired and returned more than 400 aircraft to the warfighter, he said.

Discussion on depot activity included workload realignment regarding the C-130, the Global Hawk (UAS) and growth of the F-35 program.

“From a Sustainment Center standpoint, all of this is interconnected,” Kirkland said. “The landing gear at Hill [AFB, Utah] complements the engines we do [at Tinker AFB] and the avionics at Robins [AFB, Georgia]. Our supply chain and our operations are mutually dependent; we operate as an enterprise.”

Kirkland also talked about how support from each of the communities near AFSC bases help drive the Air Force mission and support future opportunities for growth. The Enhanced Use Lease and recent opening of a $35 million software support facility at Hill AFB, the partnership of Robins AFB with the Central Georgia Technical College and the acquisition of land now being used at Tinker AFB for the development of the KC-46 Sustainment Campus could not have happened without community and legislative support.

“Commitments like that are investments which help ensure each base has long-term viability,” Kirkland said.

One area where community support will remain an integral partner in progress is meeting the demanding workforce needs of AFSC, he said.

“Within Oklahoma, Utah and Georgia, we rely on community colleges, vocational schools and universities to sustain our growing workforce,” Kirkland said.

As organic software development and technologies such as robotics, additive manufacturing and 3D printing become more prevalent in sustainment operations, the need for scientists, engineers and highly skilled mechanics continues to increase.

Future workload such as the B-21, which will be sustained at Tinker, and the T-7A Red Hawk trainer aircraft, will also require new personnel with advanced skills.

“Looking back at 2012 when the Sustainment Center was born, there was cautious optimism among the three depot communities,” Kirkland said. “I’m convinced, seven years on, that this journey has produced a win-win-win outcome. Our workloads, our workforces, our interdependence have created a shared journey that is only getting tighter and more beneficial.  As the commander who gets to lead AFSC, I could not be more proud.”