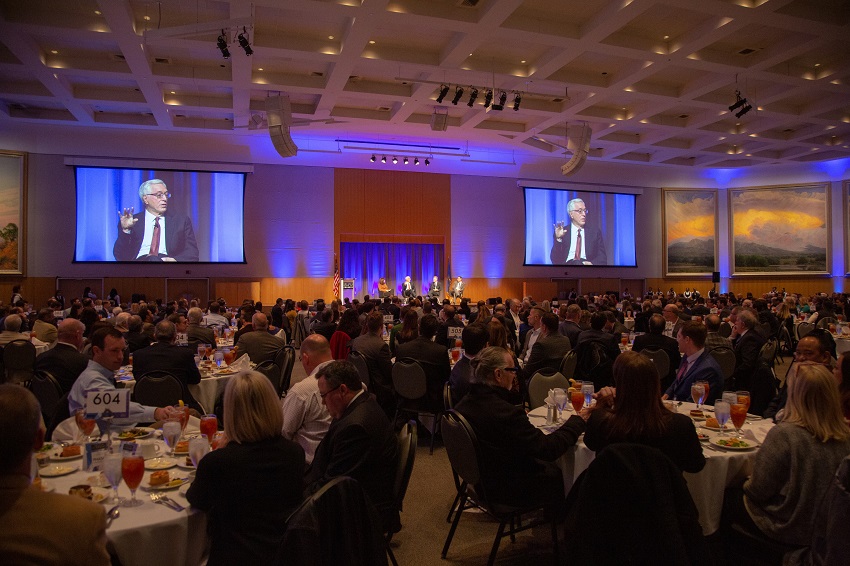 For the past eight years, the Chamber’s State of the Economy event has been a principal way for chamber members to gain insight into the local economy. Information about economic trends is critical to help guide Oklahoma City’s continued progress. More than 600 Oklahoma City business leaders attended this year's event to learn what the economic experts think lies ahead.

That future looks very bright as the calendar is about to flip to 2019, with unemployment at an all-time low and employment at a ten-year high. Through September, the Oklahoma City metro added nearly 16,000 jobs over the same time last year. And year-to-year, employment gains are now approaching 2.5 percent.

This year’s job growth has been buoyed by new entries to the market, with companies like Kratos, Amazon and Rural Sourcing moving to Oklahoma City.

There is almost one billion dollars of new capital projects in downtown alone, which will only further strengthen OKC’s highly successful visitor and tourism industry. Developers across the city are making their marks, from Gary Brooks’ innovation with the First National Center downtown to the Medallion Group’s creation of a premier leisure and entertainment destination in northwest Oklahoma City at Chisholm Creek. These are just a few examples of the many remarkable projects that are creating jobs, adding to our economy and bolstering our quality of life.

“I’m optimistic about things like activities down at the river complex and having the streetcar come online; I’m excited by the convention center in the economic core – all of these things are signals of economic successes,” said Russell Evans, economics professor at Oklahoma City University.

“My concern is what’s happening outside Oklahoma City and what’s beyond our control.”

Evans was joined by Robert Dauffenbach of the University of Oklahoma and Mark Snead, president of the RegionTrack analysis and forecasting firm. The panel of three economists set a positive but cautious mood.

Dauffenbach said interest rate hikes by the Federal Reserve, under new Chairman Jerome Powell and to the consternation of President Donald Trump, have been necessary because the labor market is hot with a low 3.7 percent unemployment rate.

“We are looking at a national economy that’s incredibly vibrant and expected to continue with a lot of growth,” he said. “This expansion that we’ve seen is getting a little long in the tooth. You have to be a little concerned about building up a war chest to fight the next recession.”

Snead and Evans agreed the Fed is slowing growth to a more manageable speed. Snead believes members will likely ease up a little. Evans said he was concerned those efforts, although necessary for price stability and maximum sustainable employment, could inadvertently cause harm as well.

“For me, there is some concern here that, as we try to slow the economy down, it is something that's sort of sustainable and ongoing, then we overstep a little bit, we jostle things a bit and that could be the thing that that significantly slows economic growth.

I'll always fall back on my fail-safe, time-tested forecasting methodology that, when times are bad, say that they'll get better. When times are good, say they're likely to continue at about this pace. When times are really great, say, well you know, we're probably not going to be doing as well in the future.”

Snead said the last few years have presented the perfect experiment to study how tightly bound Oklahoma is to the energy industry, a sentiment echoed by Dauffenbach. Even with a rebounding national economy, Oklahoma struggled with low oil prices.

Evans said it’s obvious Oklahoma will continue to be known as an energy state for at least another generation and he warned against policymakers using strong revenue from market highs as a solution to regularly occurring government costs.

”The state has a habit of taking these dollars and spending them to, committing to a recurring expense and so I appropriate them to an agency or to an expense and then comes back the next year and wants that appropriation plus three percent and it's not there anymore,” he said. “it's a bit like getting that bonus at the end of the year and then taking it and using the entirety the bonus to build a pool in your backyard, only to realize that you also have to pay for the maintenance of the pool. You've committed yourself to a recurring expense but you don't have the recurring cash flow to manage that that recurring expense.”

The panel’s perspectives on the energy industry were highlighted by keynote speaker Peter Ricchiuti, a professor at Tulane University Freeman School of Business. Ricchiuti forecast the rise of electric cars and the decline of the internal combustion engine over the next several years. He also identified liquid natural gas and oil in shale drilling as two of the most important trends in energy.