Wheelbarger and the Trifecta team returned for another summer camp the following year and the students were now more familiar.

“Ultimately, we had this idea of ‘what if we could create a Silicon Valley tech start-up for the kids?’” he said.

Norman-based Loveworks already had some experience in helping its students launch a business. The nonprofit organization works with young people age 11 to 14 to empower their creativity, resourcefulness and potential. The students visit Loveworks daily afterschool to work on their projects and meet with community mentors, along with other programs.

In 2015, Loveworks’ students launched the REAL Kitchen selling their own salsa. The group is now working with Oklahoma State University to make a new shelf-stable product.

After learning about augmented reality, other students were ready to take on a new venture. They set out trying to put augmented reality on a wristband. Through their hard work and help from Trifecta, they created the WristWorld game system, which the students are pitching for Shark Tank in January.

WristWorld requires a wrist band that can be purchased at OnCue stores or on the WristWorld website. Then, by downloading an app on the player’s phone, a game appears and players work their way through the different levels. Each of the four bands has a different world. The players can also make their character three-dimensional and add more features to it.

The programming, story line and entire look were created by the WristWorld student team.

Going from learning about AR to having a product to pitch on Shark Tank has been a journey, said marketing director Braden Breinholt, 14. The students were middle schoolers when they started and now some are high school freshmen.

The group first raised $23,000 on Kickstarter to launch the product. Once they had a prototype, they took it to the New York Toy Fair in February, where they were on the exhibit floor with toy giants like Hasbro and Nintendo. 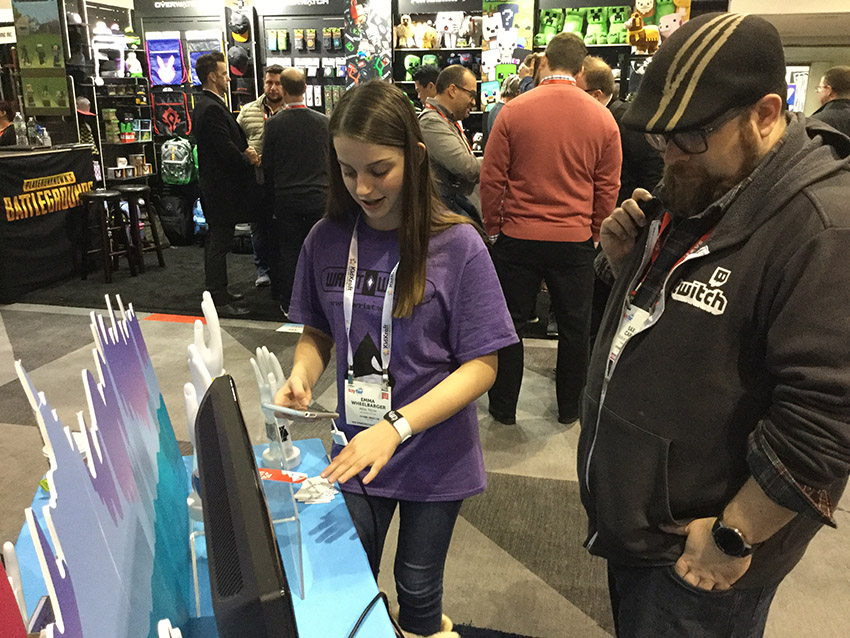 Emma Wheelbarger shows off the WristWorld game at the New York Toy Fair.

“Being in the competitive market was almost humbling,” said Breinholt. “We weren’t even registered as exhibitors. We had to go as model. But we were able to talk to these big companies and even without a product, we were able to get their interest.”

The students received valuable feedback as well, such as pricing and packaging. The crew returned home and perfected the game’s look and created t-shirts.

Dakota Mayo, 15, took the character drawings from sketches to a more realistic design. Connor Davis, 13, created a second t-shirt design and worked on the 3D modeling team to make the one-dimensional characters into something digital. Aidan Strother, 15, is also on the art team and created the original t-shirt design. Strother said the art team has already started on designs for the next phase of WristWorld, which could be a board game.

The wrist bands launched in OnCue stores in October. They can be purchased individually for $7.99 or as a four-pack for $25.

OnCue Express Stores President Laura Aufleger said it was the company’s Vice President of Operations Tommy Schreffler who first heard about WristWorld. He saw the group speak at a Leadership Oklahoma event.

“He came back and said, ‘This is the coolest thing. I don’t know what we can do with them. But this is really neat,’” said Aufleger.

She later saw a presentation about the product at TedXOU event in September. Fortunately, OnCue was able to work with WristWorld to get the product in its stores. They’ve even expanded the store count, with more than 40 locations now offering the bands.

She said OnCue looks for a gift item every year. With the bands being made by young entrepreneurs and having an approachable price point, the company thought it was a win-win.

Strother said he saw in person just how fast the product had sold. A few days after the launch event, he went to the OnCue by his house and noticed there weren’t any on the shelves. He asked about it and the store had already sold all theirs.

Davis said it’s been great to see the fruits of their labor.

“It’s amazing to see something that so many people around me have worked on and put so much time and love into is now something that actually exists and people can go buy,” said Davis.

Loveworks Executive Director Michael Hirsch said the product has caught the attention of teachers as well, who are relishing the fact that it’s made by students.

“We got an e-mail from a teacher saying she wanted to get each of her students a wristband because she wanted to show them that their dreams can become a reality,” said Hirsch.

The students are not done making their dreams come true. In November, they attended ChiTAG: Chicago’s Toy And Gaming Week where they were able to sell their product. They almost went home empty handed after selling so many bands at the expo.

The next big step in the journey will be a trip to Dallas to try and get on Shark Tank. They have one minute to make it past the first audition and get closer to landing on the show.

Then in February, the students will head back to the New York Toy Fair with their actual product. And they’re already planning to go to San Jose, Ne Mexico in May, where they’ll attend the Augmented Reality Expo. 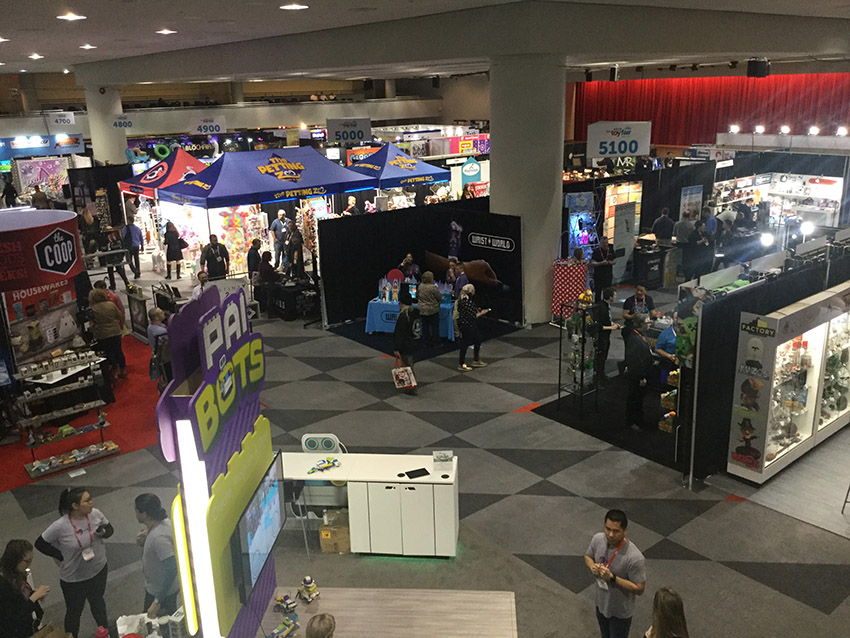 The 2019 New York Toy Fair floor is packed with the best-known toy brands. The students will attend the show again in February.

While showcasing the work they’ve done is good and speaks well of the organization, WristWorld is a business. The students have also been watching their bottom line, keeping track of merchandise and other expenses. There’s a student finance team that keeps up with the expenses using the QuikBook software. The students keep up with the invoices from each OnCue store as well. Katie Sparks, 13, helps keep track of the finances.

Wheelbarger said Trifecta is excited to be a part of WristWorld, not only because the company has introduced students to AR, but the persona they’re spreading about Oklahoma City.

“I think it’s exactly the sort of message that Oklahoma City should continue to accelerate to the rest of the world,” he said. “We have our challenges, but we have the ability to innovate just like anyone else in the country. The proof is in the pudding with these students.”