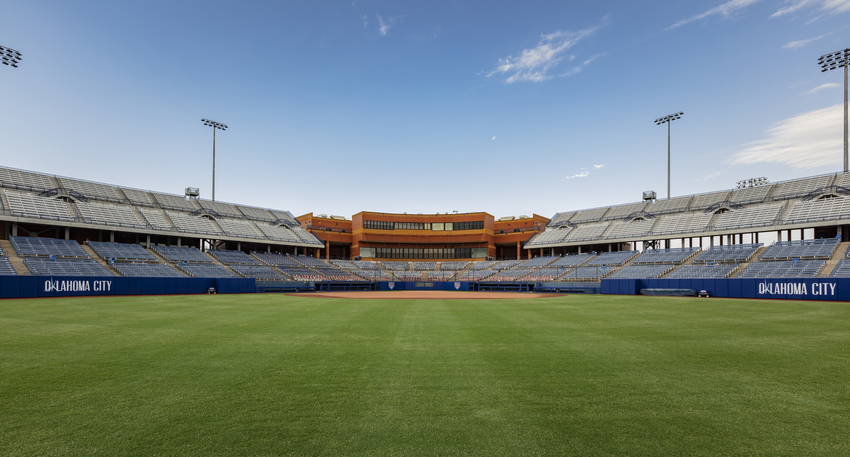 Construction finished at the USA Softball Hall of Fame Complex just in time for a global pandemic.

And for USA Softball, having that complex open has been beneficial as other states canceled large events.

The City of Oklahoma City started the 4,000-seat addition at the complex in summer 2018, after that year's NCAA Women's College World Series. Construction paused for the 2019 WCWS then work continued on the $20.3 million project, that added many amenities to the complex, including more space and better technology for media, kitchen space, restrooms and elevators. The money was part of the 2017 voter-approved general obligation bond package.

“We missed hosting the NCAA Women’s College World Series this year, especially since we had an expanded stadium to show our devoted fans,” said Sue Hollenbeck, director of sports business for the Oklahoma City Convention and Visitors Bureau. “But the silver lining has been that the stadium expansion is complete and we were ready to bring events back to the Softball Capitol of the U.S.”

USA Softball had men’s and youth softball players continue to flock to OKC to play at the home of the WCWS.

“Even without the series this year, we’ve learned we’re still a softball destination,” said Craig Cress, chief executive officer for USA Softball. “And with everything else in Oklahoma City, such as all our neighbors in the Adventure District, there’s a lot to do here. People want to come and take it all in.”

In June, USA Softball welcomed a Heartland Fastpitch League event, held from June 28-July 1. It was the first event USA Softball was able to hold at the complex since the USA Softball All-American Games because the stadium was still under construction. There were 26 teams total for the league’s tournament.

In July, USA Softball was able to get a true test-run of its updated place with its Gold National Championship Tournament, which was slated for 48 teams, comprised of a 16-and-under and 18-and-under division. This was the first time the tournament had returned since 2016 because of construction. The event is supposed to be in Oklahoma City every even year.

“But as the pandemic hit harder around the U.S., there were other places that were not as fortunate to have events, so we opened up the tournament,” said Cress. “We had 80 teams at one time in the mix, but there were 71 teams that ended up playing.”

Games were played at the Hall of Fame Complex, and at complexes in Mustang and Choctaw.

“We played a lot of softball games in six says,” he said. “But it was nice to have some real softball to deal with, to have that hustle and bustle back again.”

The Girls’ Class A 12-Under Fast Pitch National Championship was scheduled July 31-Aug. 2, but it became more of an exhibition event for a California team that planned to come to Oklahoma City and get some play against regional teams.

The 2020 USA Softball All-American Games was held the third weekend of August and the USA Softball Men’s Major National Championship was moved to Oklahoma City after it couldn’t be played in South Bend, Indiana.

In late August and into Labor Day weekend, the city saw teams return to Oklahoma City after their tournaments were moved because of construction at the stadium.

“Everyone was excited to be back,” said Hollenbeck. “And we were glad to have them. It’s been quiet out there for too long.”

While it will be quiet at the complex this month, the USA Softball staff is resting for an upcoming busy month.

In October, softball will resume at the complex as OSSAA high school championships are played and two other tournaments hosted by the newly-formed Alliance Fastpitch League. Formed by travel ball coaches from across the U.S., the league’s goal is to let teams of all caliber come together and play.

The Alliance and USA Softball are now partners, so more events from the league could be coming to Oklahoma City.

While there’s a lot still being discussed for 2021’s events at the complex, including possible Team USA exhibition games before the Olympics, Cress said he’s ready to more regularly hear bats popping and see balls flying.

“We’re looking forward to sharing this fantastic facility with a lot of different organizations,” he said.