What's next for aerospace in Oklahoma? 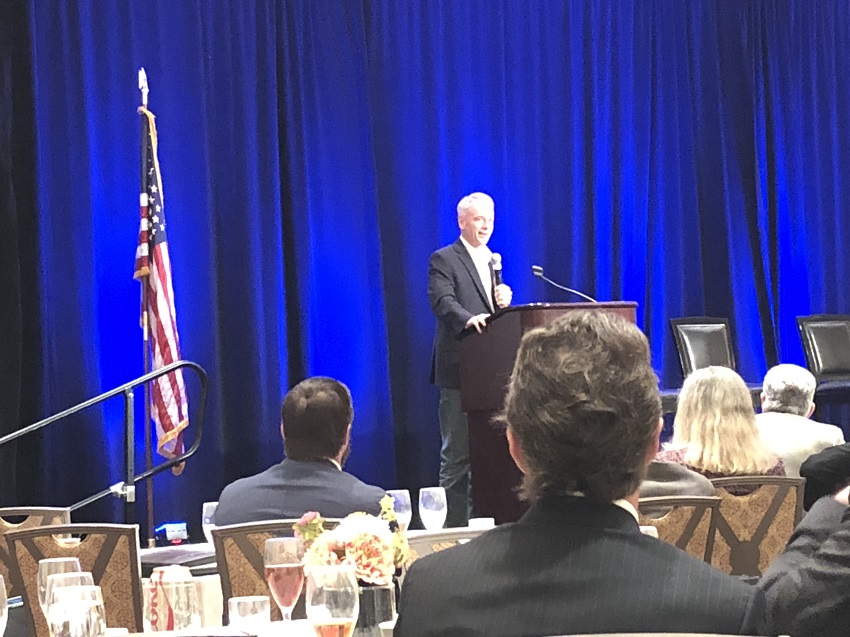 U.S. Rep. Steve Russell gave the closing remarks at the first Oklahoma Aerospace Forum in Oklahoma City on Tuesday where he spoke about the future of the aerospace and aviation industries, which are critical to the region’s economy and workforce.

“Oklahoma’s aerospace industry is thriving,” he said. “Aerospace companies recognize the potential in our state and it’s important we keep supporting this industry which provides so many jobs to Oklahomans and helps boost our state’s economy.”

Russell told the nearly 300 attendees that aerospace could easily be the primary economic engine in the state.

“We’ve got all of the ingredients to make aerospace the number one industry in Oklahoma,” he said. “But, nobody’s baking the cake.”

Aerospace is an important segment of the state economy, with more than 230 aerospace firms located in the Oklahoma City region alone. These firms produce nearly $5 billion in goods and services locally and employ nearly 40,000 people in the region.

Some of the biggest names in the aviation industry have operations in Oklahoma City, including Boeing Aerospace, Pratt & Whitney, Lockheed Martin Aircraft, Northrup Grumman, General Electric Aviation and AAR Aircraft Services, with more being regularly added to the already impressive list.

At the forum, Russell announced he will form a congressional advisory task force to advise how Congress can continue to promote and grow aerospace in Oklahoma and nationwide.

“We’ll take the best and brightest minds, put them in five key areas (pilots, maintainers, air traffic controllers, engineers and fabricators) with the purpose of making aerospace the number one industry in Oklahoma,” he said.

Russell addressed the widely publicized national shortage of pilots (both civilian and military), air traffic controllers, and a shortage of qualified workers for aerospace manufacturing and supply chain employers.

“We have an incredible capacity in Oklahoma, but it’s all geared and tooled for an industry that is very cyclical in nature,” he said, referring to oil and gas. “It’s great when it’s on the upswing, but it’s not so great when it’s in decline. Aerospace is climbing, and they’re not even starting to see a bend towards leveling off until somewhere mid-century.”

Citing Oklahoma’s flyable weather, due to our sunny climate, Russell pointed out how important the state’s three U.S. Air Force bases are in training pilots.

“If you took Oklahoma airspace out of the defense equation, the Air Force would not have pilots,” he said.

One of the solutions Russell proposes involves getting young people enthused about aerospace by bringing a new type of flight school, the Bob Hoover Academy, to Oklahoma City. Founded in California by famed professional aerobatic pilot Sean D. Tucker, the academy would create opportunities that inspire at-risk and underserved teens to get engaged in STEAM (Science, Technology, Engineering, Arts and Mathematics) education and to take flight in aviation. This could result in high school graduates already having received their private pilot certificate, paving the way for more advanced ratings and helping alleviate the pilot shortage.

When it comes to maintenance and repair operations, Russell called for a reevaluation of how we educate and train potential employees.

“There are a number of community colleges that are doing this well, but they’re doing it in the automotive industry,” he said. “They’ve always shown that they can get corporate sponsorships to come in, set up the machines, set up the technicians, bring in the engineers, train these folks, then walk out the door with an associate degree and walk into a job making $60,000 a year. That’s great! Why couldn’t they be doing that turning wrenches for aircraft or on engines?”

Discussing air traffic controllers, the congressman said, “there are only three places you get them. Almost all of them come from the FAA, a tiny portion come from the military, and the FAA can be augmented with contractors.”

Russell said that promoting those types of jobs to young people is extremely important because the controllers who were hired following the strike in the ‘80s are rapidly nearing retirement. Those controllers would be trained in Oklahoma City at the FAA’s Mike Monroney Aeronautical Center, meaning an even greater economic impact on the local economy. He also expressed strong support for the FAA as it currently exists and sees no benefits from privatization of the agency.

The lack of engineering focus on the aeronautical and aerospace fields is another challenge the state faces.

“There’s not an engineer out there that’s not going to walk right into a job,” Russell said. “But name the institution in Oklahoma that has the aeronautical school – not department – but school. I’m working to change that and I’ve found a university that’s willing to do it, so stay tuned.”

Russell suggested that corporate partnerships may be a solution.

“We need to leverage our light and medium manufacturing capacity and also look at the corporate and college opportunities that are out there so that we can create our own fields,” he said. “Institutions need cool things, modern equipment, glass cockpit repair rooms, fabrication work, composites, making wings that have no ribs, other amazing stuff. The students then see that and they think, ‘Yeah, I’d like to come to this institution!’ but that will never happen if we don’t get business involved.”

The one area that the state is lacking, aviation-wise, is manufacturing. But what would it take to change that?

While not calling for oil and gas tool manufacturing companies to convert to aerospace, Russell did say that it made sense for those companies to consider supplementing what they already build by diversifying as a hedge against energy sector downturns.

“News flash. If you can make a part for the oil and gas industry that will stand all of the pressures underground, if you have an engineer and machinist that can do that, you can make an aircraft part,” he said.

Russell also called for more of the national defense budget to be spent in Oklahoma, saying he would like to see that amount doubled. “There’s no reason we can’t do that but we’re letting that slip through our fingers,” he said.

The desire to make aerospace the number one economic sector in Oklahoma shouldn’t come at the expense of oil and gas or any other sector, he said.

“It’s not competing with the other industries. It’s really expanding aviation. And, if other businesses expand way beyond that, hallelujah! Because, Oklahoma wins.”